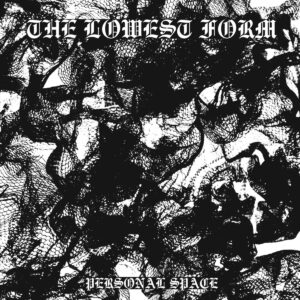 Louder than War’s Ioan Humphreys gets to review another one of his bands/albums of the year.

Ok so following on from what has become a purely accidental theme, I present to you yet another band that I experienced and absolutely loved at Supernormal Festival last year. A hot and sweaty ‘Red Kite’ stage was where The Lowest Form unleashed a relenting assault on all the senses. So much so that there was no other option but to vacate the tent and escape the chaos, flying bodies and pummelling noise they produced. At the time I said “The Lowest Form have their roots firmly planted in hardcore and have no pretensions at all. They just made an almighty fast racket.  Their frontman prowled the stage, sweating pints, goading the audience and band”. In retrospect, I take nothing of that back.

Personal Space is the second LP from this London outfit. Negative Ecstasy was their first release back in October 2016 and it is a balls to the wall unrelenting and brutal release from start to finish. I wholeheartedly recommend you check that out once you have heard Personal Space!

From the opening line of the ‘dub’ version of the first track ‘Interplanetary Bad Boy’, “Smash my fucking head against the wall” is a pretty good description of the feeling that the sound that The Lowest Form makes. The experimental noise of the intro leads into the track proper and it is a full on attack with a no-nonsense vocal and glorious disorder.

‘Gak Attack’ is a possible nod to the “UK’s #1 Musical Instrument Shop” which could also have a mention in IDLES’s superb LP Brutalism? Anyhow who knows. Machine gun drumming and a dense distorted guitar and bass fill the track to the brim and again it is subject to an unrelenting vocal barrage from Chris Bress. It may have its tongue firmly in its cheek, but its heart is down the local.

‘Last Smash’ and ‘Star Slammers’ are both 100mph onslaughts with fucking spiteful power and are completely uncompromising exercises in the power of barrages of noise in the name of punk (with a small p). ‘Dread Future’ is an unstoppable and ceaseless bombardment. This is genuinely the closest I have ever got to feeling the same way I did when I first heard Minor Threat. The Lowest Form is THAT good.

‘Evol’ is another squealing feedback starting unstoppable barrage of load vocals and headache inducing guitars and drums. This leads quickly into ‘No more Hiroshima’ that is again an incessant torrent of aural abuse with an unfeasibly fast riff and vocals bordering on the grindcore (very much like Bress’ vocals on Negative Ecstasy) The penultimate title track is a final lesson in noise and is met with squealing feedback and a dissonance that sounds like a microphone has been placed deep in an ant colony! It’s both horrible and lovely in equal claustrophobic measures! Final track ‘Helter Skelter’ is absolutely the final insult. It is a torrent of squealing guitar and stop start unremitting speed drumming to the dying end.

The anger and frustration that you get from The Lowest Form is one that is mirrored by bands like Sleaford Mods and IDLES. It’s borne out of said anger and frustration, but also it’s a fear and sadness that can only breed an emphatic and impassioned response. How you deal with this response is us to the individual, yet I think the afore mentioned, along with The Lowest Form, have the balance of seriousness and humour completely right. The Lowest Form may ere on the more aggressive side, but their message is clear as a bell. Listen to Personal space, then listen to Negative Ecstasy. You will not be disappointed! It’s fast, furious and nasty stuff. Hardcore at it’s best.

The Lowest Form can be found on their Bandcamp and via their label.