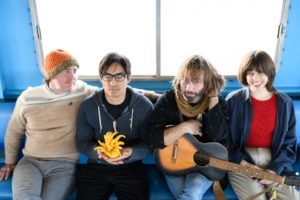 It takes a lot of nerve, not to mention confidence in your own abilities, to perform a new album in its entirety when you’re far from a household name. Especially when your audience has visibly dwindled after an excursion into experimentalism that has alienated a large part of that audience. And it takes an extra bit of courage, or perversity – or sheer madness – to do it in the dark.

But Rhode Island renegades The Low Anthem have never done things the easy way, whether it’s dumpster diving for discarded cereal boxes to make sleeves for their first album, handpainting and silkscreening the covers for the second, recording the third in an abandoned pasta sauce factory, or building a studio in an old vaudeville theatre in Providence.

At a show that has been downgraded from the bigger Garage venue next door due to disappointing ticket sales, four figures in socks step slowly in silhouette on to a stage bathed in backlit blue light. All that’s visible is the outline of the band – multi-instrumentalists Ben Knox Miller and Jeff Prystowsky, guitarist Bryan Minto and violinist Florence Grace Wallis – and their equipment.

Lights blink amid antique keyboards festooned with foot pedals, hand pedals, a spaghetti of wires and other electronic paraphernalia; at the back, a small drum kit jostles for space with a big double bass. There’s barely enough room to swing a cat, let alone for Florence (right) to play her fiddle. The musicians, spectral figures in blue, constantly switch between instruments as they play their fifth album, The Salt Doll Went To Measure The Depth Of The Sea, in sequence, from start to finish.

It’s a demanding but rewarding experience: the record, like all four of its predecessors, is a conceptual affair, born out of a traffic accident that almost killed the band, destroyed most of their instruments and prematurely ended the tour to promote their last album, Eyeland. It’s the fable of a doll with a life of its own in the ocean, told in a series of songs that have little to unite them outside of their marine theme. Dense, demanding and complex, at different times it is haunting, beautiful, fragile, delicate and romantic, powerful, pretentious and – when it comes to a jolly singalong called Run Plankton Run (not to mention the diver’s mask worn by Miller) – playful and silly.

But the music, played on a stage bathed in blue, draw you in to its world. If you let yourself submit to its bleeps, crackles, throbs, scrapes and scratches shot through with shafts of melody – a violin here, a marimba there, a chopstick scraping the rim of a brown paper bag over there – it’s an extraordinary ambitious work that brings its own rewards, even if they emerge in fragments rather than as a conscious whole.

None the less, it’s a relief to most of the modest but fervent crowd when it’s over and we can see the band at last, and they play some earlier songs. The Pepsi Moon is one of the more accessible tunes from the false step that was their last album Eyeland: a simply strummed acoustic number embellished with delicate flourishes, including an elegiac trumpet.

Michael Hurley’s Ohio Blues leads into a selection from their two best – and best-known – albums:  Ghost Woman Blues and Apothecary Love from Smart Flesh; Ticket Taker and To Ohio from their 2009 breakthrough album Oh My God, Charlie Darwin. Their music has evolved and their sound has changed with the advent of two new personnel – Wallis brings a new dimension with her violin but the clarinet, dulcimer and other arcane instruments of the departed Jocie Adams are missed – but founders Miller and Prystowsky have a seemingly endless ability to play pretty much anything else.

They end, enigmatic as ever, encouraging the audience to join them in a rendition of Row, Row The Boat: a riposte to those who might have had them down as pretentious po-faced prog rockers that sends everyone home with a smile on their face.

All words by Tim Cooper. You can find more of Tim’s writing on Louder Than War at his author’s archive. He is also on Twitter as @TimCooperES. Portrait by Joshua Black Wilkins.