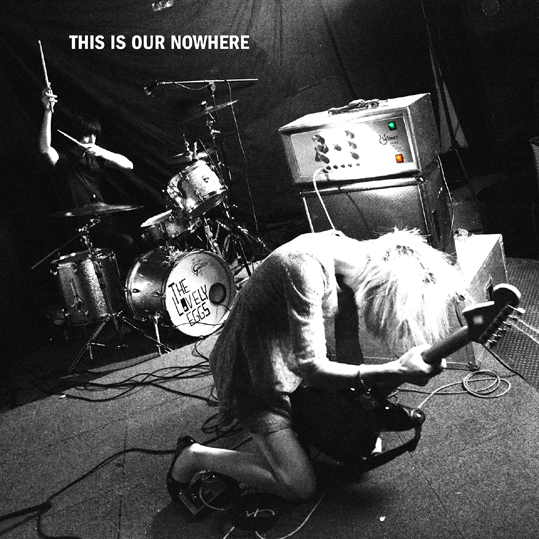 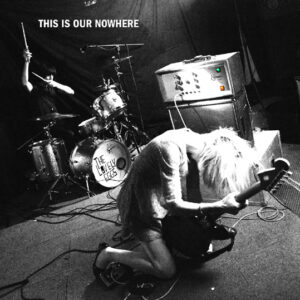 The Lovely Eggs – This Is Our Nowhere (Egg Records)

Kooky, oddball, zany, quirky, weird, eccentric, out there, bonkers – just some of the words and terms that generally litter any review of The Lovely Eggs, I’ve even seen them described as ‘two cans short of a six pack’…I’d suggest ‘a few slices short of a loaf’ would certainly be more geographically in keeping with the Lancastrian duo who have just released their fourth album ‘This Is Our Nowhere’ – I say just released; the official launch date being the 4th May…a very limited black & white splatter vinyl edition was made available for Record Store Day some 3 weeks ago such is the whimsy of T’eggs…so having dispensed with the disposable remarks, I’d better let you know just what The Lovely Eggs new album sounds like.

I saw The Lovely Eggs live back in March and described their set as “Songs of whimsy delivered with razor sharp thrash…” having had ‘This Is Our Nowhere’ on rotation for the last few weeks I remain utterly committed to that summation – crank it up and the opening mangled riff of ‘Ordinary People Unite’ will delight in shredding your speakers, whilst at the same time worrying about the health and safety implications, the fragility of Holly’s vocal delivery in stark contrast to the churning guitar and world crashing around you drum pounding, all of which fails to prepare you for the simplistic magnificence of ‘Do It To Me’…a burst of howling feedback, the title almost spoken and then the entire track explodes into a collision of Ramonesesque buzz-saw guitar, crashing cymbals, repetitive drumming and the impish yelp of “Do It” as Holly offers up a love song…of sorts.

‘Goofin Around (In Lancashire)’ an adrenaline fuelled feedback scorched nod to Sonic Youth, and The Jesus & Mary Chain, that belies the (mis)conception that The Lovely Eggs are some sort of twee Sarah Records outfit; there is nothing cutie-pie here as ‘Goofin’ opens up that throttle and hammers its way right into your head, for ‘Slinking Of The Strange’ to really mess up the contents with its twisted psychadellia… it’s an odd but very welcome juxtaposition.

‘Magic Onion’ was released as a 7” coloured vinyl single back in March, pressed on (apparently) onion coloured vinyl – not sure where Holly and David buy their 5-a-Day, but I ain’t ever seen an onion that colour; whatever it is they are eating though has conjured up a genuine raucous mind fuck of a track; the familiar slashing guitar howl, the raining drums, Holly’s fragile voice…the Lancastrian drawl of “Onyon” is just gorgeous and then were accosted by massed “ooh ahh’ resonating vocals perfectly matching that metronomic beat – imagine a scene from Jason and The Argonauts, as the captain hollered out the rowing cadence, an entirely nonsensical reflection of The Lovely Eggs single mindedness.

As is the case with all Lovely Eggs tracks the songs on ‘This Is Our Nowhere’ are set in the hum drum of everyday their life; they recorded the entire thing in an abandoned factory overlooking Lancaster, carefully adding their own kaleidoscopic colour explosions, crafting a sound of instant engagement, the sound of exuberance, the noises of punked up mischief – and in current times that’s exactly what we need.

1. Ordinary People Unite
2. Do It To Me
3. Music
4. Goofin’ Around (In Lancashire)
5. Slinking Of The Strange
6. The Investment
7. Magic Onion
8. I Nearly Saw A Stabbing Last Night
9. Cilla’s Teeth
10. Forest Of Memories