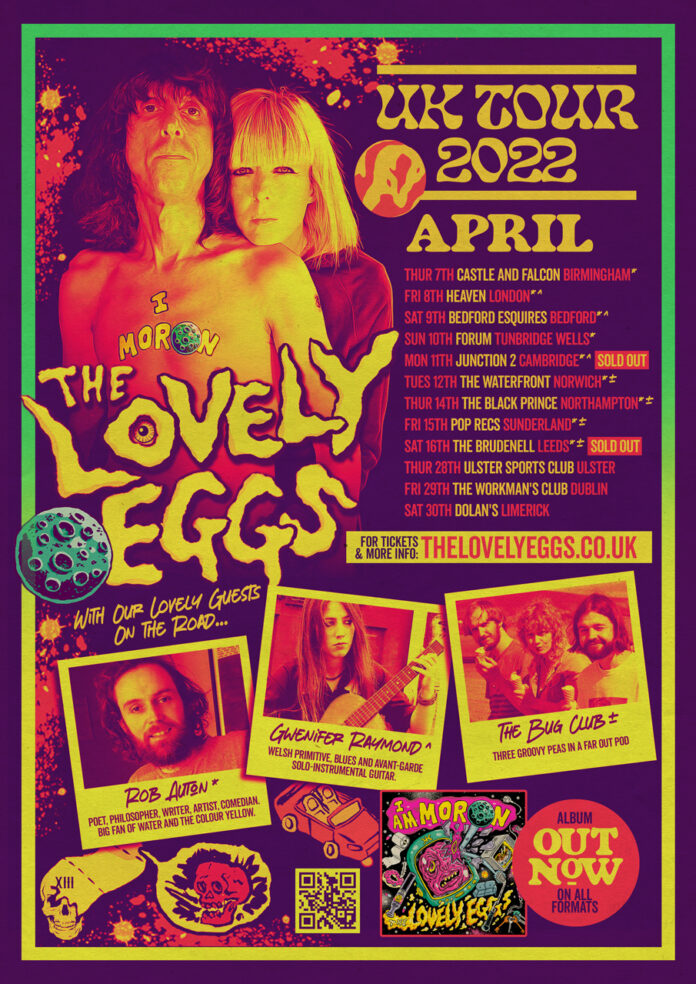 At last, The Lovely Eggs have announced a UK tour – and it’s delicious, or maybe that’s DIYlicious. Come and celebrate their tripped out wonk punk rock…

In their own words:

“Every time the school holidays hit, we head off on tour,” explains Holly. “Our lad is 9 now and we’ve been touring with him since he was 4 months old. It’s just something we have to do. When we decided to have a kid, we knew we didn’t want it to change our lifestyle. Everyone goes on about settling down and getting proper jobs when you have kids but that’s just nonsense. We knew we could do things differently.

“Making music and touring and being in a band is fundamental to who we are. There was 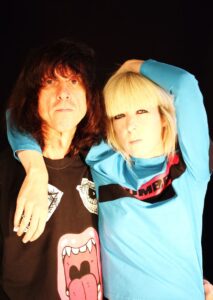 no way we could stop doing it. So, we bought a mini fridge for the van, and I expressed milk for when I was on stage and stored it in there. I sterilised bottles every night after the gig. We took a mate with us to babysit. Nine years on and we’re still at it. And our little lad loves it. He’s been round the world with us through the band and visited some amazing places. We’ll ask promoters to get stuff for him on our rider and he loves a kick about during soundcheck. The late nights and early mornings used to be a killer but no worse than some of the hangovers we used to have!

“As a woman I’m not having anyone tell me what I can and can’t do, or what stereotype I need to fit in with. This is our dysfunctional family and we bloody love it!”

Joining them will be three like-minded support acts: Rob Auton, Bug Club, and Gwenifer Raymond. Labelled ‘a genuine original’, Rob Auton Rob has written eight hit Edinburgh Fringe shows, which have led to nationwide tours and television/radio appearances. Bug Club are a trio currently turning heads, hearts, eyes and ears following the release of their debut EP Launching Moondream One in early 2021 through Bingo Records. Finally, Gwenifer Raymond is a master songwriter, taking from the sounds of the Welsh Valleys and Appalachian Folk for an adventurous embrace of compositional tradition.

The Lovely Eggs will also shortly release Fried Egg, a limited edition (1500 copies) 10″ EP that will be available from 8th April featuring rare songs and live recordings that were originally available as a CDR release back in 2007.

Says Holly,“This Egg EP was the very first collection of songs we released in 2007. We couldn’t afford to press vinyl back then so we put together our own CD-Rs at home which we would then sell at gigs. It included new songs at the time and live recordings, and we put it together to look like a fried egg in old joke shop packaging. Over lockdown our mate Phil, who runs a vinyl cutting business in Brighton called 3.45RPM, surprised us with a copy of it on vinyl which emulated the CD-R original. We loved it so much we decided to get it pressed so our fans could have a copy too. And here it is. ”

The Fried Egg 10″ will be available here

Catch The Lovely Eggs and support live at the following dates in 2022: