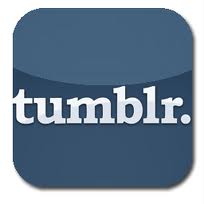 As suggested by the term “microblogging” Tumblr is somewhere to put short blog posts. Although 50% of Tumblr blogs are photo’s we’ll be using Tumblr mainly as an audio & visual representation of the Louder Than War website itself, so most of what we put on our Tumblr will be either an embedded video or some music embedded from one of the many streaming sites out there.

One way of thinking of our Tumblr would be as a simpler version of Louder Than War, one stripped of most of the words; although having said that if you decide you would like to read more about something we’ll include a link to the relevant page on either the main Louder Than War website or somewhere else where you can find more information.

One of the other aspects of Tumblr is that it has a stronger social side to it than most blogging platforms. This and it’s ‘micro’ nature, is why some people have referred to it as a cross between Twitter & a blog. However unlike Facebook, say, you don’t have to be signed up to Tumblr to enjoy it. We’ve installed a comment box powered by Disqus so anyone with an email address can comment on our (micro) blogs. Similarly you don’t need to ‘follow’ us to keep abreast of our posts as you can either bookmark us like a normal website & visit when the whim takes you or you can subscribe by RSS feed.
/>

If you already use Tumblr then naturally we’d be stoked if you were to follow us, love any of our blogs, reblog anything, ask us any questions or submit any posts to us.

So here’s the link again: Our Tumblr