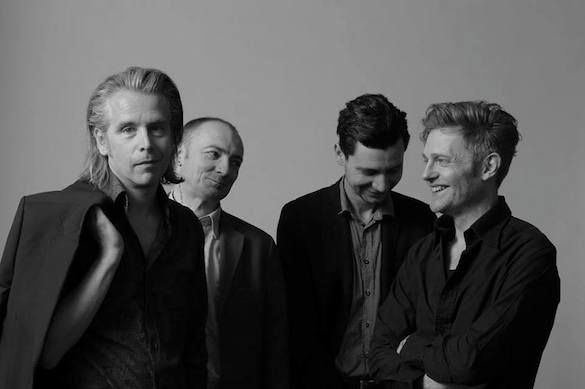 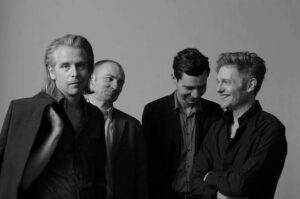 Gallon Drunk have just released ‘In The Soul Of The Hour’ – their best album in a long and thrilling career. John Robb asks them how they have, somehow, got even better and what inspires this fascinating band…

This could be your best album yet—does age suit Gallon Drunk?

I think it’s our best too. We wouldn’t have got hear without the other albums, but whether it’s age related who knows. Leo our bassist is in his mid twenties, and he’s also bringing a lot to the sound of the band.

There is much more emphasis on the groove – have Gallon Drunk become funky?

The focus of the band has always been the drums, and we’ve pushed that further on the last two records, with the help of the producer Johann Scheerer. It’s the heart of the band, and the album. It’s definitely got a groove you can dance to, somewhere between Can and James Brown on some of the tracks. In general it’s feels more direct and locked in groove-wise, with far more trippy elements around it.

A nine minute opener is pretty ambitious! is that setting the stall for the album?

Once we’d recorded that track, it did seem an obvious opener. Prior to that, I’d imagined the title track being the opener, in fact that one was going to be an instrumental originally, and that seemed an exciting way to start too. But Before The Fire does seem to introduce the feel of the whole record, the whole now band in fact.

There is something quite European about the band now – have you escaped the clutches of Camden to make music that is more international?

Maybe that reflects that we’re different as people, or listening to different stuff, I don’t really know. When the songs were in a demo stage there were loads to choose from and anything familiar got ditched, and in the process all the more Krautrock, hypnotic tracks seemed to come together, and just felt more exciting to play. More stretched out, more out there in general.
Less angry, and more trippy. but still really full-on.

There is a sense of urgency about the album – a dying in the light – is this awareness of the end a creative plus?

I think it’s something that drives people and art in general, but I agree that there is a desperate urgency in both the music and the lyrics, but also a sort of euphoria too, like Dylan Thomas’ “rage against the dying of the light”.

Is the band more gallon sober than gallon drunk these days!

I think that’s a physical and mental necessity.

The songs have increased the filmic/3D quality about them – is this an important aspect?

It always has been. Soundtrack music was a big influence on the band when we started, and that sort of feel is still in there, but it comes equally from jazz like Gil Evans and Mingus. We wanted this record to be something you could really get lost in, to take you somewhere, atmosphere’s really important to the music, now more than ever.

James – you have worked with some real heavyweights but always returned to Gallon Drunk – is this creative independence important to you?

It’s absolutely vital, Gallon Drunk is the absolute centre to what I do, playing with Ian, Terry and Leo.

There is a lot more varied emotional content and story telling to the album – is this important?

I think that the music commanded it. We always record the music first, and then I write to that, or doctor ideas to suit the finished feel of the track, and as the music’s changing, the style of writing can stretch out with it too.

What can we expect from the new line up live? (really looking forward to the gigs)

We’ve been rehearsing the new tracks, and it’s sounding really, really powerful, and taking it further, tracks are extending, it feels great, there’s so much energy to it.

We were listening to a lot of Velvets bootlegs in the studio, and I think that’s showing too. In fact I can’t wait to get playing. We’re off on tour in four days, and by the time we get to the UK dates in a few weeks, who knows, it’s probably have morphed into something else again.