Home Music Reviews Album Reviews The Long Tall Texans: The Devil Made Us Do It – album... 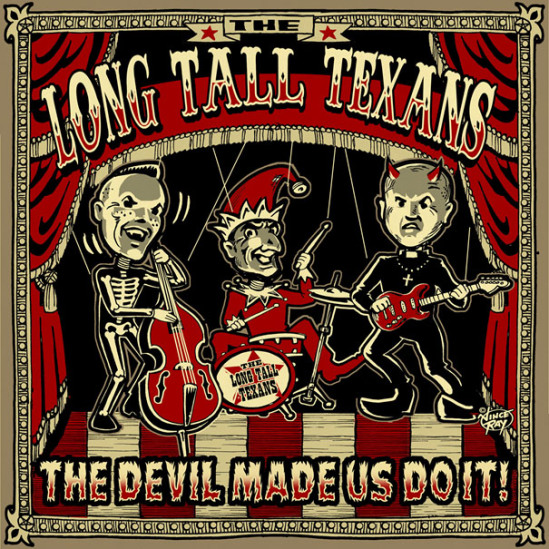 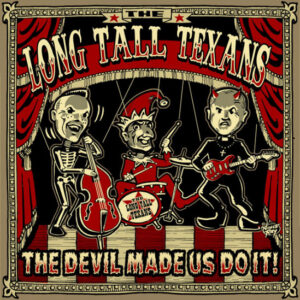 I remember The Long Tall Texans from way back; a couple of us used to travel the UK following The Guana Batz, and making occasional forays to the then home of the UK psychobilly scene; The Klub Foot in London, as such I was aware of The Texans and always held them in great esteem; their ability to blend traditional rockabilly, psychobilly, punk, and even country to a certain extent elevated them above say King Kurt who at the time seemed more interested in flour, eggs, cross-dressing and outlandish haircuts – that’s not meant to be a criticism of King Kurt, it’s just that The Long Tall Texans seemed more interested in the authenticity of the music, and as a foolish lad in my early 20’s daft haircuts and messy gigs seemed just right by me. As such when ‘The Devil Made Us Do It’ arrived I was intrigued to discover just how these boys sounded in 2014.

I looked on the label website and noted that they described The Long Tall Texans as ‘Sugar-Psycho-Country-Rockabilly- Westernpunk-Cocktail!!’ not a genre I was aware of, but if your going to target an audience you may as well aim wide!

It’s the Brighton band’s first release in just over eight years, and comes housed in a Vince Ray commissioned sleeve; the majority of the tracks being written by Garry Castleman, whose brother Matt wields the Texans guitar along with long-time members drummer Theo, and vocalist/slap bass Mark Carew (also of The Hotknives) – instrumental opener ‘Taxi’ unleashes a surf tinged broad-shot, a clarion call for 12 further tracks of 50’s style rockabilly rhythm; ‘Girlfriend’ continues the rooted in the 50’s feel, hooks a plenty, the drums to the fore as Mark regales us with a faintly salacious tale of sexual impropriety; ‘Kamikaze Killer’ ups the pace…back at The Klub Foot the slam dancing would have been in full swing; despite the typically psychobilly ‘Kill Me’ title this one is all twanging guitar and refined vocal licks, whilst ‘Sex, Beer & Psychobilly’ borrows the riff from both ‘Brand New Cadillac’ and ‘Get In On’ to such an extent I went looking for a Vince Taylor writing credit – that said if you are going to borrow, borrow from the best!

‘Let Me Go’ takes on a more punkabilly stance though at no time do The Texans forego their musicality in favour of aggression; these are well crafted and tightly produced songs that will remind the rockabilly scene just what they have been missing these past few years though I doubt ‘What Part Of Fuck Off Don’t You Understand’ will be adorning many T-Shirts – this one is a real curveball, the obvious aggression of the title is in contrast to the doo-wop harmonies that lead into the tongue in cheek lyric; be good to see this one performed live…

Perhaps recalling their psychobilly roots the Texans then deliver arguably the albums strongest songs ‘I Fell In Love With A Zombie’ powers along harking back to the psychobilly influence with the reference to Zombies, though this isn’t Meteors style blood and gore, the lyric being more about mistaken love before the breakdown allows Mark to question if it’s wrong to love “just because she lives in a grave”, the horror theme continues, well B-Movies were always double headers!! ‘I Used To Feel Funny’ opening with a lupine howl and continuing into a Cramps style riff. Album closer ‘Feels Like Ice’ is another odd one – seems to be a collision between a rockabilly band and perhaps The Sweet!! Really, the opening drum refrain, I really was expecting to hear “You better beware, you better take care”

‘The Devil Made Us Do It’ is a brave album, having been AWOL for 8yrs it would have been easier for The Long Tall Texans to have just cobbled together a psychobilly workout – credit to them and their desire to stretch themselves musically, on this album they venture into surprising territories; that will be the ‘Sugar-Psycho-Country-Rockabilly- Westernpunk-Cocktail!!’ and as a result have created a hugely rewarding rock ‘n’ roll album