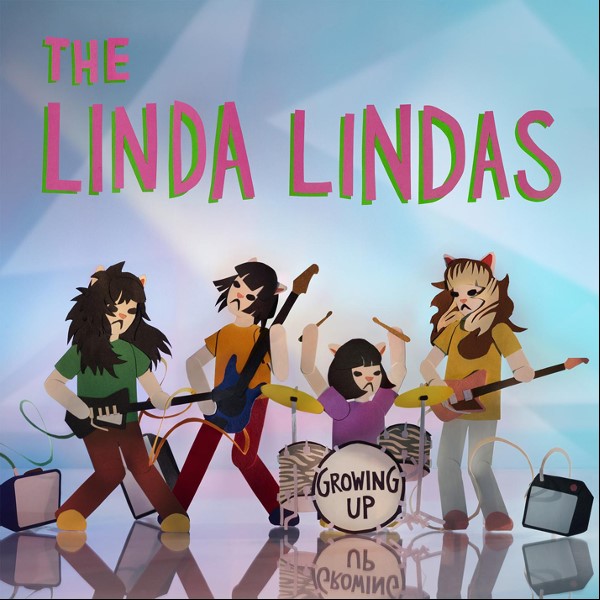 Debut album from band too cool for school.

Music journos and critics have been picking over the dead carcass of rock music for around two decades now, discussing everything from when was rock’s last glory year, when did it actually die and is their any hope for it. Of course, to any gig goer jumping up and down in a mosh pit to their favourite rock band, the news of rock’s death may seem to have been, to quote Twain, greatly exaggerated. In true rock fashion, the bands who have carried on after the last nail has been knocked in the coffin, couldn’t give two tosses for what the experts say. Rock’s problem was always how to get old, when its premise was based on teenage rebellion. A teenager isn’t going to rebel by listening to a rock band when his grandad is blasting out Bodies by the Sex Pistols. Rock will die if newer, younger bands, don’t take up the effects pedals and turn it up to eleven, which is why the Linda Lindas are such a breath of screeching air.

Coming to global attention in 2021, when their performance of the track ‘Racist, Sexist Boy’ for the Los Angeles Public Library went viral, the band had already been gathering fans in LA since 2018. What makes them the future is they have a combined age adding up to Mick Jagger’s little finger. Mila de la Garza is 11, Lucia de la Garza 14, Eloise Wong is 13, and Bela Salazar is an old woman at 17. There are no old farts here. No old male farts. The future is young. The future is woman.

The Linda Lindas began playing together a at all-ages matinees in Chinatown, playing with LA punk legends like The Dils, Phranc, and Alley Cats. They went on to open for riot grrrl legends Bikini Kill and Alice Bag as well as Best Coast and Bleached, and even found their way into Amy Poehler’s movie Moxie. They were an LA secret until that video went viral.

Now, The Linda Lindas release their first full-length LP on the world. An album written between home schooling due to COVID, and hanging around each other’s houses in LA.

The album opens with Oh!, a punk song in an 80s groove with a great chugging beat and sneering and paranoid vocals. It’s got a very cool bass line and a chorus the B-52s would be envious of. Growing Up is reminiscent of Avril Lavigne or the big punk pop chords of Green Day, spiced with a bit of the Go-Gos. It has the openness and lightness, and overpowering glare, of an LA sun. It will take you back to those painful days of growing up and the what the fuck am I gonna do with my life feeling. Or you will relate because you are living it right now.

Talking To Myself is a bouncing punky pop tune, full of great energy, whilst Fine is riot grrrl intense with heavy pounding beats and the vitriolic vocals spat forth like vomit. After that we get Nino, a song about a cat, with a 70s punk sound of slashing guitar chords. Why alternates a heavy sound with a tuneful, catchy chorus. It’s got a great bass riff. Cuantas Vecas is a change of pace about the oddballs and outcasts of the world, and the casual cruelty shown them. Sung in Spanish over a bossa nova beat it shows there’s more to the Linda Lindas’ than three chords. Remember is new wave power pop with harsh guitar chords giving it edge.

The album closer is Racist, Sexist Boy. It’s a great anti-prejudice song with grungy heavy chords and the vocals full of anger and resistance. You can see why the live version went viral.

LA always had a great underground music scene, one very particular to its location. Whereas the East Coast was dirty and gritty, there was, at least to start with, a playfulness to LA’s punk scene, and one that attracted all the freaks and weirdos, but which sadly descended into violence and posturing. A scene that once was a safe place for women and freaks, became a bloody animal pit. So, it’s great to see an all-girl group becoming part of that history, and bringing youth back to a tired scene. With the longest song on Growing Up coming in at 3:40 and the shortest at 1:50, it’s an album that slams in, gets the job done and comes out leaving you dazed and happy.