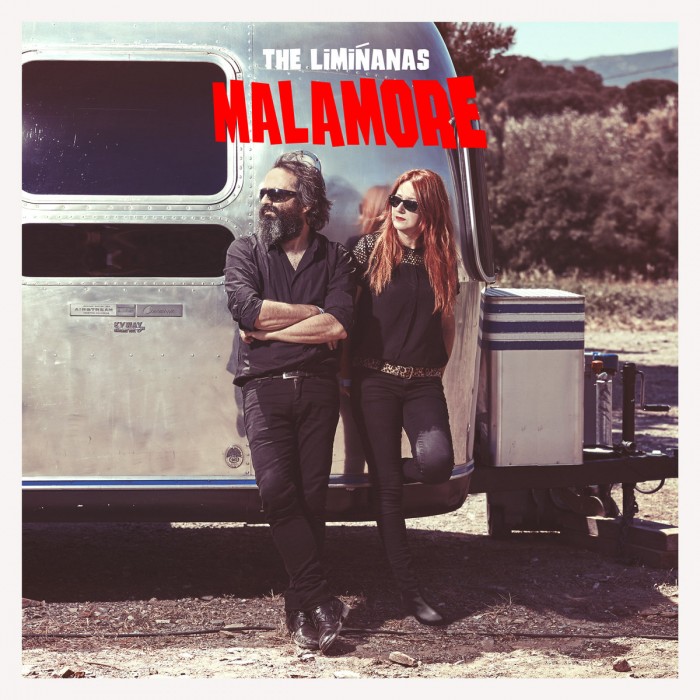 One of Frances most beloved treasures -a band who combine Garage Punk with Movie Soundtrack music – Gainsbourg meets the Velvets via Morricone.  Ged Babey lights a Gitanes.

The Limiñanas  are like a French Raveonettes in a way – only with Gainsbourg and Suicide/Stooges as main influences instead of the Ronettes and Buddy Holly.

Or maybe a Stereolab in scuffed cowboy-boots and dressed all-in-black, playing a Franco-American motorik, Serge with Marty Rev…. well, kinda….

They’ve been around since 2009 and this is fourth proper album. (I’m gonna track down  the self -titled debut, Crystal Anis, Costa Blanca and the self-explanatory compilation I’ve Got Trouble in Mind: 7″ and Rare Stuff 2009/2014.)
Half-spoken/half/sung vocals, some male, others female, some in French, some in English. This really is a beautiful, faultless album if you like French pop and sunglasses-after-dark cool.

I could go on and on about the sheer, chilled-out ambiance of this album, which is brand new/ retro and modern /vintage without the contradictions that being the sum of opposites can entail.  So I’ll let you decide from the Press Release…

As for their previous albums, Marie is on drums and vocals and Lionel on guitar, bass, keyboards and vocals. But this album also features a stable of guests, the most notable being Peter Hook, who adds bass and chorus vocals on the hypnotic and dreamy ‘Garden Of Love’, the first single off the album.

On the cover of their new album ‘Malamore’, their first for Because Music, Lionel and Marie Limiñanas are back in black,  stood next to a classic silver Fifties trailer, shot at a beach festival in the French town of Paulilles by the Spanish border, just 30 minutes drive from the duo’s home town of Perpignan.

One of France’s most beloved treasures, their latest and greatest album is rooted in garage-punk, but with the flair and range of a movie soundtrack: Serge Gainsbourg, meets Yé-Yé meets Phil Spector. The Nuggets compilations and early Stooges and Suicide albums meets the Sixties film genres of Commedia All’italiana and French Nouveau Vague, while sounding only like The Limiñanas. “We integrate a lot of different influences,” Marie and Lionel declare, “but most of the time, it’s unconsciously, and very naïve.”

Naïve or knowing, the results are sublime.

(It’s probably deeply un-PC of me to say it but..) There is nothing sexier than a French woman singing in whispered,  heavily-accented English.  “Eet muss be a drim. Nussing is rill…”

The couple of songs sung (or recited) in their native tongue are a real test of my old school-boy French.  There are definitely some ‘filles a la plage’ so that’s nice. and a cool stream of rhymes ending in -eek.  Comme le charge électrique, platonique, atomique and musique… among others.

The initial joy of Maladore is ticking off the influences and strategically-placed and lovingly-worn cliches.  Gainsbourg & BB, Nancy and Lee, Jim and William Reid, Ennio Morricone and the Velvet Underground -the latter of which would’ve been a helluva collaboration and at times The Liminanas get near to it, in sound and feel.

Hooky’s unmistakeable contribution is plaintive and wonderful; the best days studio work he has done for years

This is a beautiful, timeless, flawless album for times when you just want to use music to relax or to put on when you are driving.  Not that I drive: “The more you drive the less intelligent you become” (Repo Man -1984) … now that’s a thought; if Alex Cox ever makes another film, ideally set in Europe in the late 60’s, then this is the perfect soundtrack.

And here it is, in its entirety, an almost-exclusive Youtube playlist of the whole album…. Enjoy.  Bon soir mes amis.

the album is available from Norman Records in the UK.

All words, except press release, by Ged Babey whose author profile is here.