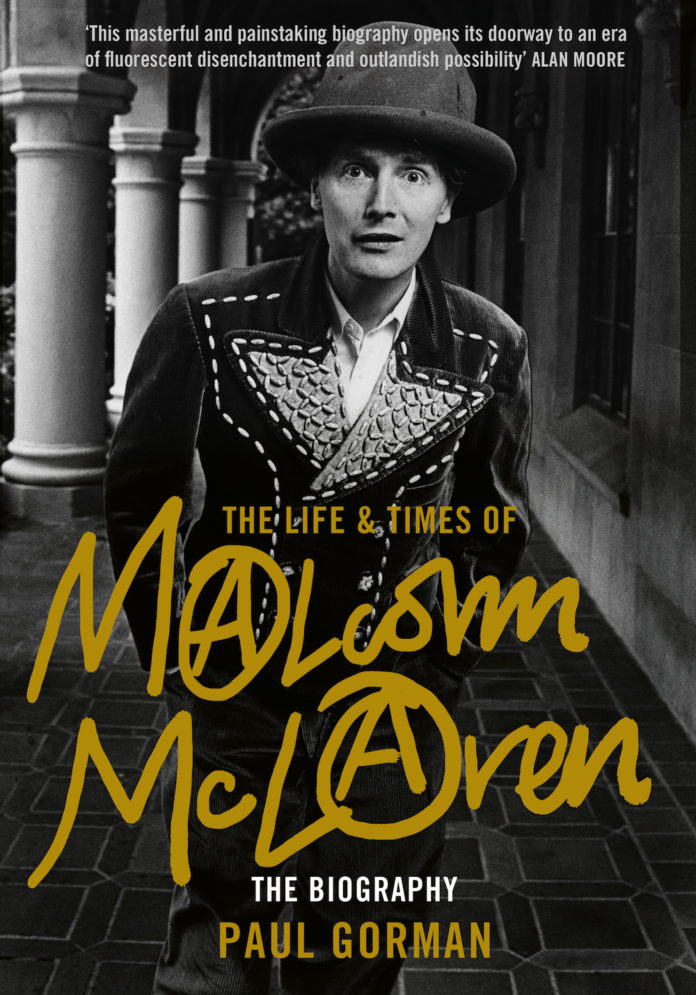 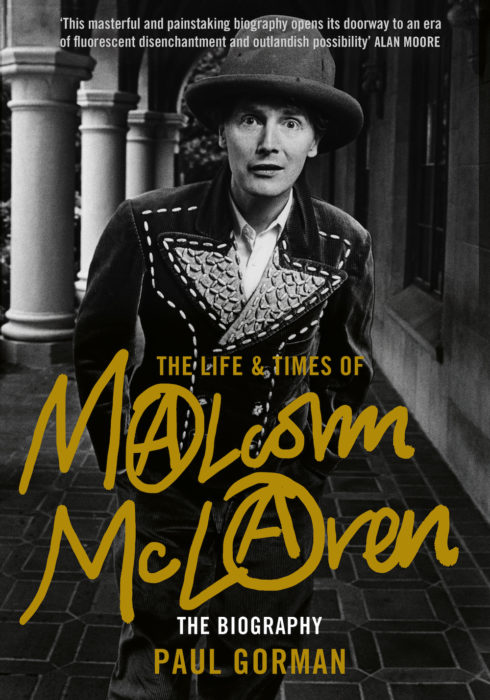 The Life & Times of Malcolm McLaren – The Biography By Paul Gorman

The Life & Times of Malcolm McLaren grants us fascinating new insights into the public achievements and private life of this cultural icon and architect of punk. It is the definitive biography of McLaren, telling the true story behind this complex personality.

How best to describe this book? Well, at 855 pages it’s certainly a weighty tome. But don’t let that dissuade you. Reading it is like taking a long train journey, say from Glasgow to London, when you have somehow blagged your way into first class. The journey seems half as long as it should and when you reach the end of the line you are a bit sad that it’s all over.

The fact that is slips past so effortlessly, yet entertainingly, is down to two things. Firstly, the subject matter himself. Throughout his life, there was never a dull moment when Malcolm McLaren was around. It’s evident that he was taking notes on all of those occasions when his grandmother, Rose Corré Isaacs, inexorably orated, “To be bad is good because to be good is simply boring. And who wants to be boring?” Who indeed? His ex-lover, American actor Lauren Hutton, perfectly describes him as “extraordinarily intelligent, but, boy, was he complicated”.

The second factor that makes this book so engaging is Paul Gorman’s writing. Camus once stated that “a chronicler’s task is merely to say ‘this happened’”. Unfortunately, too many of today’s chroniclers (or biographers) seem to have taken this too literally. They fall into the trap of repetitively regurgitating sequences of events, which invariably makes for a pretty poor reader experience. Mercifully, throughout this behemoth, Gorman never does that. He is such a consummate narrator that you are gripped throughout the entire book. This is particularly true of the early chapters, where his skill enables him to paint vivid pictures. He perfectly illustrates the lives of McLaren’s parents and grandparents as they navigated their difficult course through life in a blitzkrieg-ravaged, war scarred East London.

What an incredible subject for a biography McLaren makes. Few can lay claim to have been at the epicentre of one of the epoch-making moments in rock and roll history. His old art school chum, Fred Vermorel, describes it better than anyone when he states that “McLaren’s Sex Pistols was as seminal and resonant as Picasso’s Guernica”. But when it comes to Malcolm McLaren, there is a much more comprehensive story to be told. We are fortunate that Gorman has invested the time and energy to tell it with such meticulousness.

So, it’s important to stress that this is not a book about the Sex Pistols. God knows, there have been quite enough of them. It’s about Malcolm McLaren, from his abnormal childhood and the emotional fallout which undoubtedly shaped the man he became through to his post-Pistols work, right up until his premature death. That latter period makes for an intriguing and insightful read, despite the fact that much of his work failed to even see the light of day.

I have already referred to the author’s phenomenal attention to detail and this really comes to the fore in the chapters covering McLaren’s formative years. For me, this section of the book is the most interesting. Gorman is utterly forensic in exploring his subject’s childhood, giving us true insight into the man himself.

It is evident that he had an utterly chaotic early family life. As McLaren himself describes it, “I grew up in a household that had no real structure, no sense of family unity and no sense of order”. Gorman reveals that McLaren would occasionally sleep with his grandmother, albeit in a non-sexual way, until his late teens. Indeed, according to McLaren, as a teenager his grandmother even threaded embroidered silk ribbons into his pubic hair to ward off sexual encounters.

One can connect all of these dots to events in McLaren’s future. Perhaps that’s where his love of chaos throughout the rest of his life came from. On a darker level, maybe that dysfunctional, weirdly physical thing with his grandmother subliminally influenced many of the punk fashion concepts, such as the two cowboys, that he created with his partner, Vivienne Westwood. Then we have the passages in the book when McLaren is introduced to the literature of Situationist International by Vermorel. There can be no doubt that McLaren’s confrontational tendencies, which were so prevalent throughout his life, were stoked by these writings.

All of this detail, the whole back story, is incredibly relevant in helping us understand what created this virtuoso underneath the ginger curly locks. Without that, there is no substance. That’s why this book is so important. It helps us understand the man who did so much to shape an entire movement.

As he embarked upon his career, it’s clear that he was driven by an obsession with standing out. Not being boring. That made him thrilling to be around and brought a brilliantly ground-breaking dimension to much of his work. There was an edge to him and that’s an admirable trait in this vanilla flavoured world. But at times it went too far. Glorifying the Cambridge Rapist? Printing t-shirts with naked pre-pubescent boys provocatively smoking cigarettes? That’s not edgy. That’s worrying. You cannot help but wonder how these ‘artistic’ choices were shaped by that disordered childhood.

Furthermore, you have to question McLaren’s morality when, years after the event, he continued to defend the class clown, Sid Vicious, after he had chucked a pint glass causing it to shatter off a pillar and blind an innocent man. That’s not punk – it is insensitive and crass. To his credit, the author doesn’t gloss over these events or seek to excuse them.

Much of his post-Pistols work, especially after 1984’s Fans, was overlooked. Many of his projects, however ambitious, never actually came to fruition. But his flame continued to burn brightly and that spark of genius remained. For example, in an interview with Ariel Van Straten for the magazine Don’t Tell It, he forecast the future. “Web TV, downloading music, graphics and so on is definitely the future, definitely where it is going to go,” McLaren told Van Straten. This was one year before the first MP3 player and three years before Napster.

In a way, it’s a little sad that he will always be remembered primarily for the Pistols. Gorman’s biography clearly demonstrates that he was so much more than that. And, of course, he was always adamant that the band did not define him. When the Pistols re-formed and embarked on the Filthy Lucre Tour in the mid-nineties, McLaren said “I wish I cared more. I try to but I can’t. I suppose it’s because it’s antique, it’s in a vacuum, it’s in a frame – it’s part of a compilation of oldies. If you think about it, is it really any different from a Gerry and the Pacemakers reunion?” Miaow! Sharpen those claws, Malcolm.

Having said that, whilst he always refused to allow his central role in the birth of punk to define him at the expense of everything else, he was always prepared to draw explicit reference to it. He regularly referred to his grandmother, as ‘the first Sex Pistol’ and ran on the Mayor of London ticket in 2000 on a motto of ‘Everybody can be a Sex Pistol’. To the end, he was a marketer and fully understood how to sell the product.

If you want to read yet another book about the Sex Pistols, this possibly isn’t for you. But if you genuinely want to get an insight into one of popular culture’s greatest Svengalis, a man who truly shaped modern music, fashion and art, then I cannot recommend this book highly enough.

You can find Paul Gorman online here. He is also on Twitter