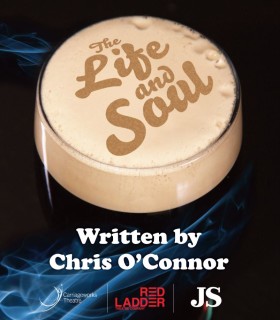 Chris O’Connor’s new play The Life and Soul focuses on how depression is cutting down thousands of men who take their own lives every year.

It is a thoroughly depressing statistic that suicide is the biggest killer of men under 45 and 76% of all suicides carried out every year are by males, but as a society we still refuse to talk about mental illness.

The same is true of theatre companies who prefer to focus on middle class angst so The Life and Soul is a refreshing change although on first showing Jack the Lad and self-proclaimed character Jim seems an unlikely victim of depression as he stalks around his local boozer pint in hand cracking jokes and entertaining his mates, but he conceals a deadly secret.

Smokey Robinson hit the spot when he sang about the tears of a clown and young writer Chris O’Connor provides plenty of gags and banter as this West London working class wideboy is increasingly besieged by ‘back clouds’ that threaten to drag him under.

Even his fanatical love for Queen Park Rangers that defines the young Jim begins to feel empty as his mates drift away to real life, and their refusal to talk about his problems leaves him ever more isolated. ‘Chin up mate’ is their standard response which as Jim points out isn’t much help.

All one person shows rely on the quality of the actor and Simon James Bailie smoothes over some of the minor blemishes in the words with the sheer force of his big performance filling the small backroom of this community owned Leeds hostelry with Jim. Bailie is particularly adept at the harsh gear changes from brash pub Jim to the release of life on the terraces and finally the desperate young man on the verge of losing everything which sadly ends up being the real him.

Bailie did especially well to overcome the disconcerting noise from the other bar as the rude local pub bores treated the paying audience to a loud masterclass in total bollocks.

The Life and Soul is backed by radical theatre company Red Ladder and their artistic director Rod Dixon keeps the direction light as Bailie really gets under the skin of his character. This is the latest in a series of successful one person shows from Red Ladder, and ironically the loss of Arts Council funding seems to have really got their creative juices flowing again.

The Life and Soul is by no means a perfect work as some reworking of the text is in order, but anything that tackles this hidden killer need to be toured perhaps linking with the different charities round the country who are working hard to stop men ending it all. Jim’s story would show them that it is not just good to talk but literally could be a life saver.

Campaign Against Living Miserably is one of the many charities offering support and they run a confidential phone helpline. More details via www.thecalmzone.net