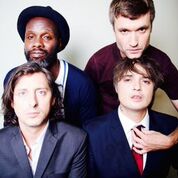 The Libertines release their highly anticipated new album Anthems For Doomed Youth through Virgin EMI Records on Friday 4th September ‘15. A single Gunga Din is available from Friday 3rd July. The album is now available to preorder on the official site, iTunes and Amazon

The video for Gunga Din, filmed in ‘Walking Street’ Pattaya, was directed by Roger Sargent and will be available to view at 8PM on Thursday 2nd July here. The first play of the single by Annie Mac (Radio One) will premier half an hour earlier at 7:30PM.

Anthems For Doomed Youth was produced by Jake Gosling and recorded at Karma Sound Studios, Thailand, over 6 weeks during April and May 2015. It is The Libertines’ third album and their first in eleven years. It will be available as a standard twelve song CD, deluxe CD, 12” vinyl, digital download and a box set. The track listings and information for all formats is:

Having just made a surprise triumphant return at the Glastonbury Festival, on the Pyramid stage on Friday night (26th June), The Libertines previously sold over 100,000 tickets in London alone last year with sold-out appearances at Alexander Palace (3 shows – September) and Hyde Park British Summer Time (July). This summer they will be headlining T in The Park and the Reading & Leeds Festivals and then playing the following:

The Libertines released their debut single, What A Waster, in June 2002. A second single Up The Bracket was released in September of the same year and hit the UK Top 30 and was followed by their debut album, also entitled Up The Bracket (produced by Mick Jones – The Clash). Time For Heroes was unveiled in January 2003 followed by Don’t Look Back Into The Sun (August, produced by Bernard Butler). A second album, The Libertines, was released in August 2004 and entered the UK album chart at Number One, spawning the top 10 singles Can’t Stand Me Now and What Became Of The Likely Lads.

NEW PHOTOS AND ARTWORK ARE AVAILABLE FROM HERE: