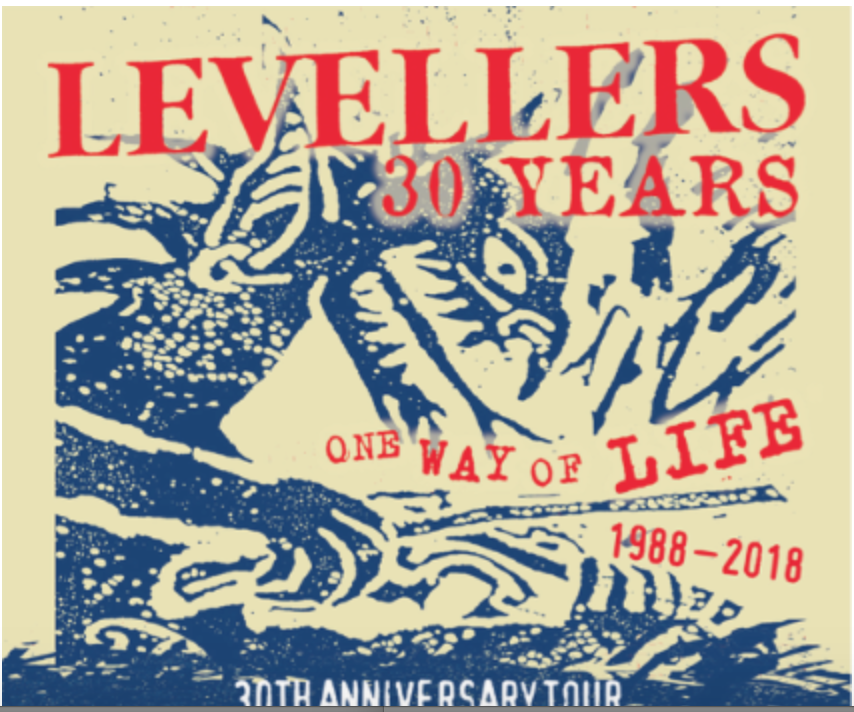 To celebrate their 30th anniversary, the Levellers have announced the One Way Of Life Tour, a 5 date full electric tour where they will be playing all the of the band’s greatest hits from their illustrious career such as ‘One Way’, ‘Hope Street’, ‘What A Beautiful Day’ and many more.

The anniversary celebrations continue following the release of their Top 20 album We The Collective earlier this year, which saw the band transform classic tracks into new acoustic arrangements, resulting in their highest chart position in twenty years and widespread critical acclaim.

The band will also be releasing eight albums on coloured vinyl via the band’s own label, On The Fiddle Recordings.

Remastered from the original 1/2” analogue tapes by the band’s Jon Sevink, these limited-edition releases will only be available from independent stores and via the band’s website.

Some of the albums have never been released on vinyl and each of the band’s original studio albums from the 90s will contain a previously unreleased live album recorded on tour at the time of release.

To kick off the campaign, their two most recent studio albums, Letters From The Underground and Static On The Airwaves were released on pink and purple vinyl respectively and are now sold-out.

Finally, in June 2019, for the first time ever, Levellers’ stunning headline set from Glastonbury ‘94 will be released on 2LP gold vinyl, completing the band’s year of ‘indies only’ albums.

All albums only available from your local independent record store or at: https://www.levellers.co.uk/shop & https://levellers.tmstor.es/

The 30th Anniversary One Way Of Life Tour starts in November and follows their headline set last month at their very own Beautiful Days festival and one of their smallest gigs in decades, playing at the 100 Club in London on October 6th.

Tickets  go on sale Friday 14th September at 9am and will be available at: https://www.levellers.co.uk/events / https://www.gigsandtours.com / https://www.ticketmaster.co.uk/