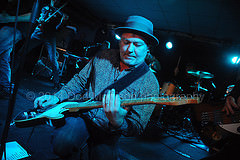 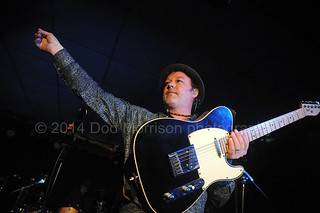 Tuesday seemed like an odd night to have a Levellers gig and Mark Chadwick, lead singer, said as much when they came on stage. This did not impede anyone’s fun and a thoroughly good night was had by all!

The Levellers have been playing together since the 80’s and it shows in their performance. Each member is an accomplished musician and they all bounced off each other perfectly. From Jeremy Cunningham’s lively guitar playing to Jon Sevink’s amazing ‘fiddling’ and accompanied by the recognisable vocal tones of Mark, they truly are an enthralling band.

The set consisted mostly of their well known songs including “One Way”, “Riverflow” and “Beautiful Day”. Everyone was jumping around after the first couple, you would have thought it was a regular Saturday night gig. Stephen Boakes came on for his usual couple of songs with his ‘wooden trumpet’ (as said by Mark), otherwise known as a didgeridoo!

Some members of the audience had obviously been so many of their gigs that they could predict what was coming next, and were even given the opportunity of counting in Simon Friend on the harmonica before “Carry Me”. 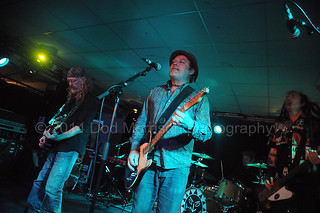 It was roasting hot but this just added to the atmosphere of fun, friends and frolics! For the encore we were treated to “Another Man’s Cause”, “Beanfield” and finished up with their fast passed rendition of “Devil Went Down on Georgia”.

It was a real treat to see the band in such a small venue for a change.