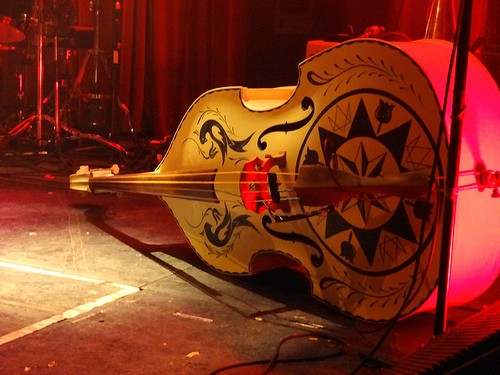 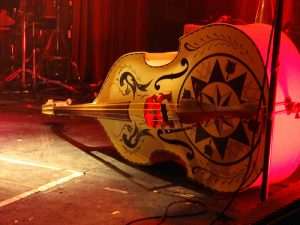 Shack Shakers front man JD Wilkes peers from the Kazamier stage; suited and booted, not dissimilar to an early 60’s high school teacher before hollering “What you waitin for… LETS GO”Â

The stage explodes into action as the Gypsy-punk-country hybrid unfolds behind him, he gyrates and howls like a cross between Iggy Pop and Lux Interior with a huge dose of southern hellfire thrown into the mix; throw in Ace Ventura after he’s mainlined the entire ‘Born Bad’ collection and you are just about getting there – it’s hard to know where to look such is the speed with which Wilkes traverses the stage, he has been described by many as the bastard child of Jello Biafra and GG Allin but there is more, much more to this band than just Wilkes, this lot play like it’s their last moments on Earth ”â€œ its relentless high energy quasi religious rootin’ an tootin that turns the crowd into a seething slam dancing frenzy.

Wilkes sings through a capped mic, within a few songs the jacket is off, a few more and he’s bare chested ”â€œ rake thin, face contorted in a vaudeville style whilst delivering Russian Cossack leg kicks, to standing on the bass drum and sticking his hands down the back of his pants to make a puppet with his fingers that then mouths the lyrics of the song he’s shrieking ”â€œ in amongst this he finds time to punish a harmonica whilst emptying the contents of an audience members handbag, all the while the Shack Shakers pound out a solid self styled ”ËœAgridustrial’ mayhem. 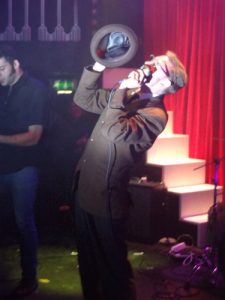 This was mesmerizing, Wilkes swings the mic lasso style before beating it across his chest, slapping his face left to right in time to that bass hog rumble, he spat, snot upon, and sweated on those at the front ”â€œ and they loved it.

It’s animated, it’s raucous, it’s simplistic, possibly dangerous – the lyrics completely indecipherable, the song titles ”â€œ who knows, and frankly who cares, this is one of the finest live shows you are ever likely to witness.

The Legendary Shack Shakers have three UK dates remaining before heading into Europe; Not to be missed…