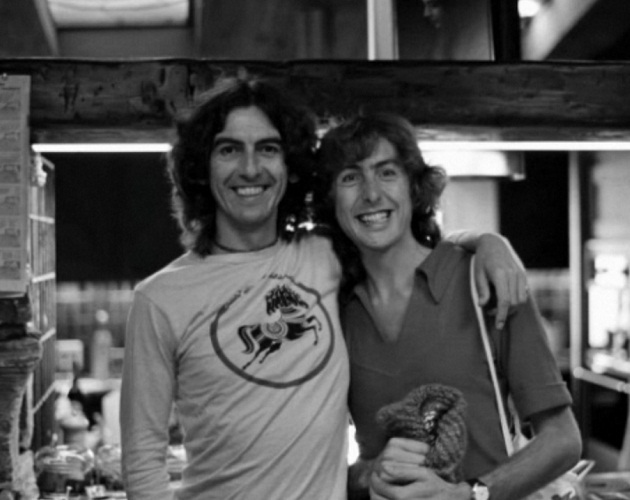 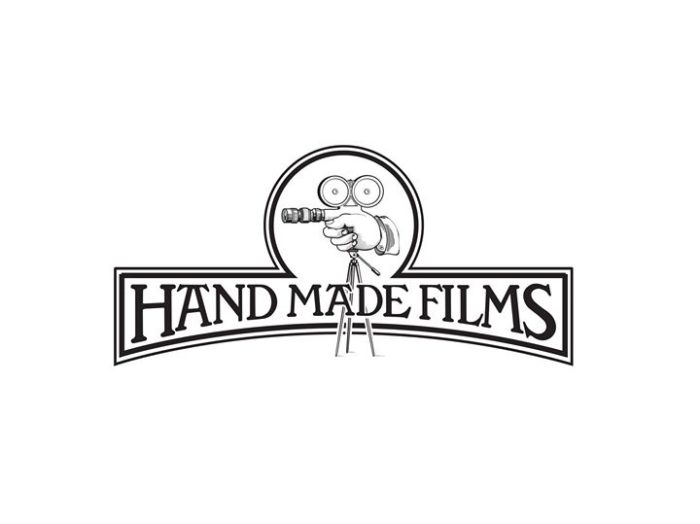 I can still remember as a kid the first time I saw 70’s cockney gangland drama ‘The Long Good Friday’, watching Bob Hoskins steadily lose the plot while he tries to fight off his unknown enemy as London gang-land leader Harold Shand, very gritty, very British and a kinda prelude to films like ‘Lock Stock and Two Smoking Barrels’ and other independent British films that followed.

Later on I’d watch films like ‘Withnail and I’ and ‘The Life of Brian’ but never realised till years later when reading up on The Beatles that these films were the work of George Harrison’s Handmade Films production company that also produced other now classics like ‘Mona Lisa’, ‘Time Bandits’, and Alan Bennett’s ‘A Private Function’.

But its Handmade Films own story that’s nearly as interesting as some of the films it produced, like many innovate projects its results were outstanding with great success at the box office in its first 5 yrs but in the end it was a venture that gave Harrison a loathing for the film industry as well nearly bankrupting him, finally ending in bitter law suits.

Handmade’s origins were born out of the collaboration on ‘Life of Brian’ with The Monty Python team in 1978 urging Harrison to set his own film production company up when EMI’s chief exec Lord Delfont, at the last minute, pulled out of funding the film alarmed at the idea of backing this ludicrously outrages laugh at the good book, and the life of Christ. This last minute let-down left the crew and actors stranded in Tunisia on location in which Harrison saved the day by backing the film himself and putting up his own home by re-mortgaging Friar Park to the tune of 4 million pounds, in the process setting up Handmade Films with the help of his manger Denis O’Brien. This left the Monty Python team knocked out by George’s belief and financial backing for a film that was saved at the very last minute; Eric Idle said of the man… 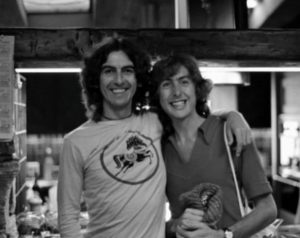 “He’s one of the morally good people that rock’n’roll produced, he’s extremely generous and has backed and supported all sorts of people that you’ll never, ever hear of, George paid for the film because he wanted to see it, the most anybody has ever paid for a cinema ticket in history“

Handmade Films next feature was ‘The Long Good Friday’ then following that ‘Time Bandits’ which Harrison wrote the song that played over the end credits, at this time Georges new venture was the source of a new found pleasure, especially working with the Python Team who years previously had made the Beatles send-up ‘The Rutles’ which included George acting as an interviewer interviewing one of the Fab’s while figures in the background ran out of the Apple building with the furniture and fixtures, a scene that played on the scamming that went on at the Apple headquarters in its last days, George Harrison’s ability to laugh at himself and his former bands heavily documented break up was more than evident.

Its name ‘Handmade Films’ was simply derived from the fact everything they did was ‘handmade’, everything was done in-house which included marketing strategies, designing and recording music for the films themselves; to Harrison it was like being in a giant band which he loved. It’s why the Wilburys came about because George missed working with other people, he was a great collaborator. From this working partnership Handmade Films went on help shape a new age and genre of British Film, a film like Life Of Brian would of never been made by anyone else at that time and the process helped forge the talents of people like Terry Gillian, Bob Hoskins, Bruce Robinson and Michael Palin to name a few. This was exactly how Harrison originally imagined how Handmade Films would work, a wonderful collaboration with friends bringing their passions together under one umbrella

Ray Cooper;
“Perhaps this was the real ‘United Artists’, but ‘Handmade’ was a much more interesting name’ 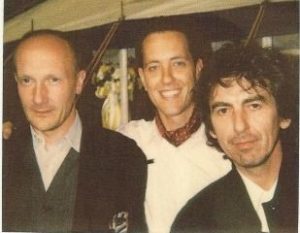 What started so promisingly would end in financial mire, to all on the outside Handmade Films appeared as a massive success releasing 23 films in 10 years that ushered in a new era of British film making. But that streak ended with the box office flop ‘Shanghai Surprise’ starring Madonna, costing a total of 10million pounds to produce it took in less than half of that when released, The ‘Raggedy Rawney’ and ‘Checking Out’ came in even worse with the latter grossing less than 3% – for any independent film company these figures were ruinous which led to Harrison attempting to sever his links with the company after being advised that ‘if he carried on like this he’d be bankrupt’. This brought him to take manger O’Brien to court in a 25million dollar law suit. Taking a former manager to court was nothing new either as he went through the same ordeal with Allen Klein and now he found himself in the same position yet again. 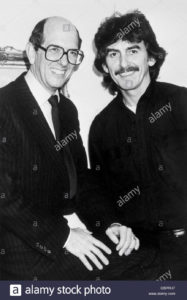 It was Denis O’ Brien’s financial structure that was brought into question, the ‘money go round’ O’Brien created was once shown to the Python team on a blackboard that showed various companies here and there with what appeared as a ‘state of the art tax avoidance’ system, that confusing the comedians were too embarrassed to admit that didn’t understand it and refused to sign up for this finical mystery tour. though Harrison felt he had every reason to trust O’Brien who first appeared as saviour after the betrayal of former Fabs manager Allen Klein, the companies films were chiefly financed by bank loans which one bank, Barclay’s ordered an audit of Harrison’s affairs which brought to light a deficit of something like 20million pounds. After talks with independent lawyers and advisers he immediately tried to sever links with the company and faxed the London office to tell staff they were fired while announcing that he no longer wanted to be involved in Handmade Films.

Later on the company was bought by Canadian company Paragon Entertainment in 1996 that went on to actually release ‘Lock Stock and Two Smoking Barrels’, the company still lives on today in some form, registered as HandMade plc when it was sold on to the Equator Group in 2006.

Handmade Films un-commercial and pioneering attitude to film making is today still seen as some of the finest moments in British film making, a true innovator.