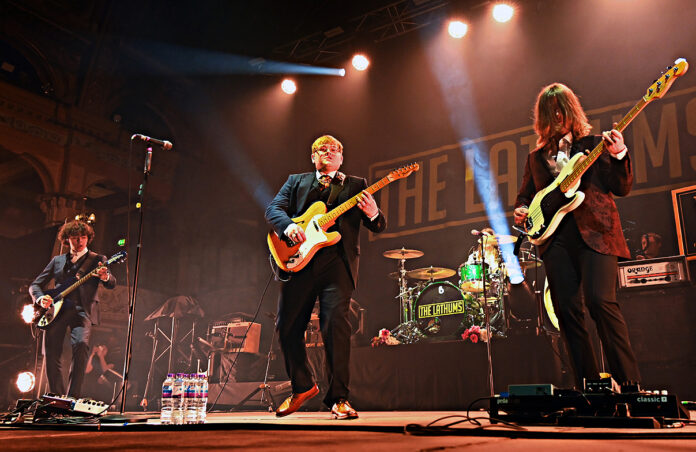 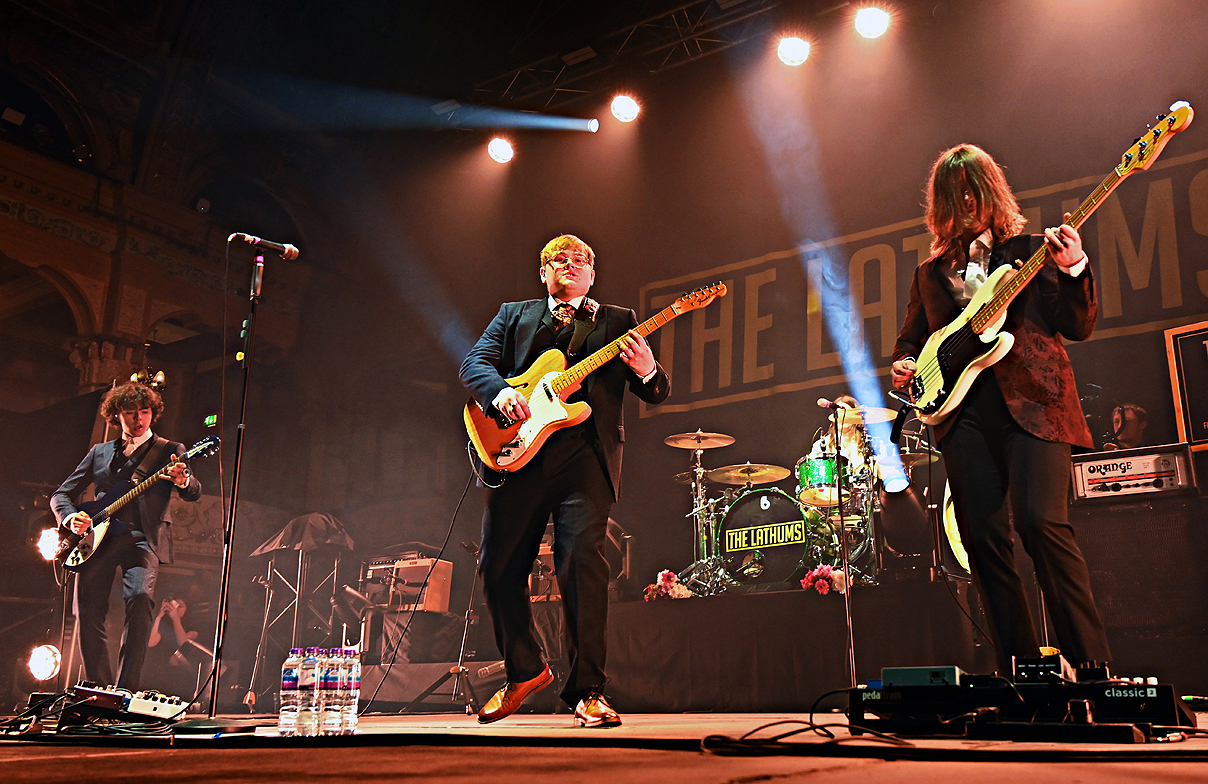 The Lathums play a mesmerising landmark gig at Blackpool’s iconic Empress Ballroom and Louder Than War are there to witness the event.

Last summer I watched The Lathums three times during the festival season, seeing their self-confidence and audience grow with every appearance. Yet these were all short, almost identical 30/40 minute sets so Saturday night was an opportunity to see if there’s depth beyond their short summer repertoire. I have to say, they certainly didn’t disappoint.

First though, there’s the not so small matter of Jamie Webster. I’d heard a few songs but these didn’t prepare me for the experience of seeing him live. Greeted like a returning hero as he walked onto the stage, it was as though no one had told the audience that he was actually the support act. 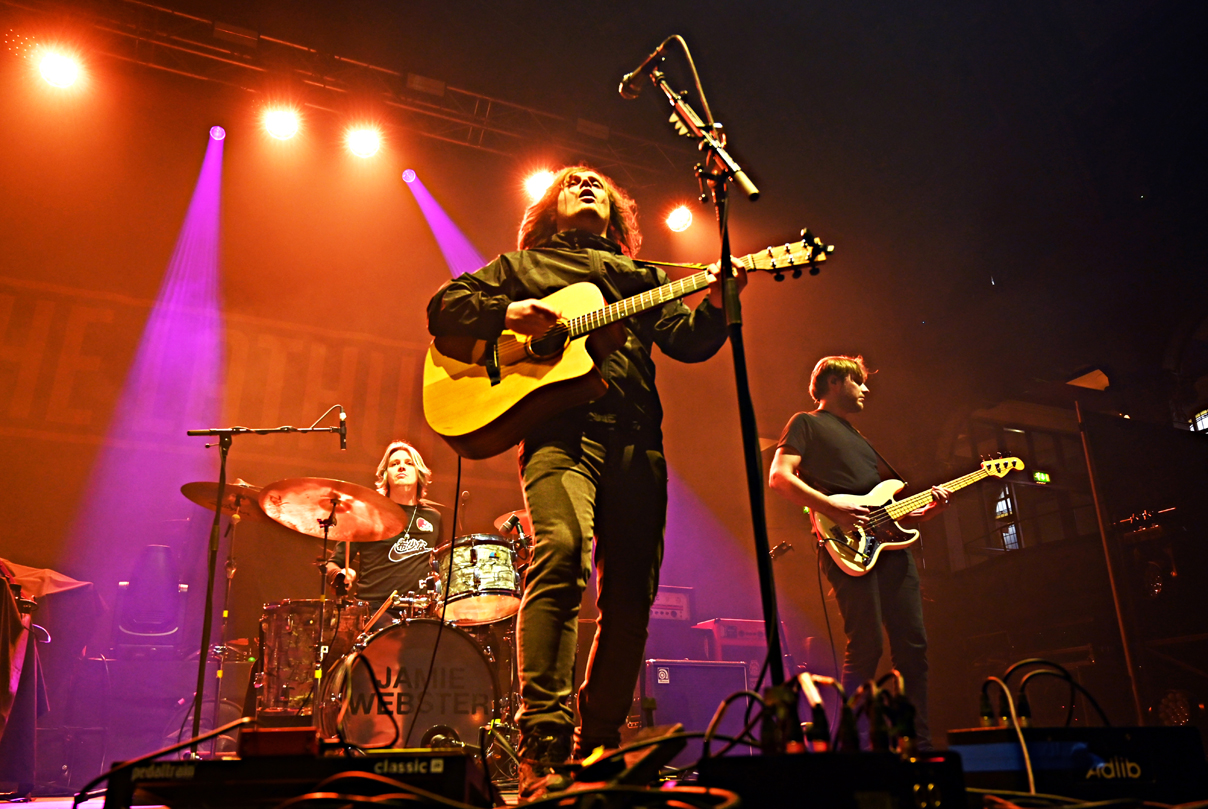 Over the next 30 minutes, we’re treated to a succession of highly charged, socially aware, politicised indie-folk songs. They’re delivered with passion, charisma and commitment reminiscent of early Billy Bragg. I guess a current contemporary is Gerry Cinnamon, but this is music far superior to the Glaswegian’s sometimes crass, simplistic lyrical banality. Highlights for me are the political commentary of Something’s Gotta Give, and This Place; his catchy, heartfelt love letter to his home city Liverpool. Closing with the upbeat, boisterous Weekend in Paradise he leaves the ecstatic crowd with an impassioned message. Have a great Northern working-class night out, make it a weekend in paradise, and fuck the Tories. I can’t help thinking; The Lathums had better be good!

The lighting dims as the opening bars of The Housemartins, Caravan Of Love booms out of the P.A. and The Empress Ballroom erupts. Walking onto the stage be-suited, each member of the band pauses to acknowledge the sea of beaming faces as roars of expectation echo around the room. Singer Alex Moore looks around, taking it all in before exclaiming; Wow! Look at you, 3000 of you. Thank you very, very, much for coming. It’s a genuine expression of wonder, appreciation and thanks and an early indication that tonight is something special for the band as much as for those bearing witness. 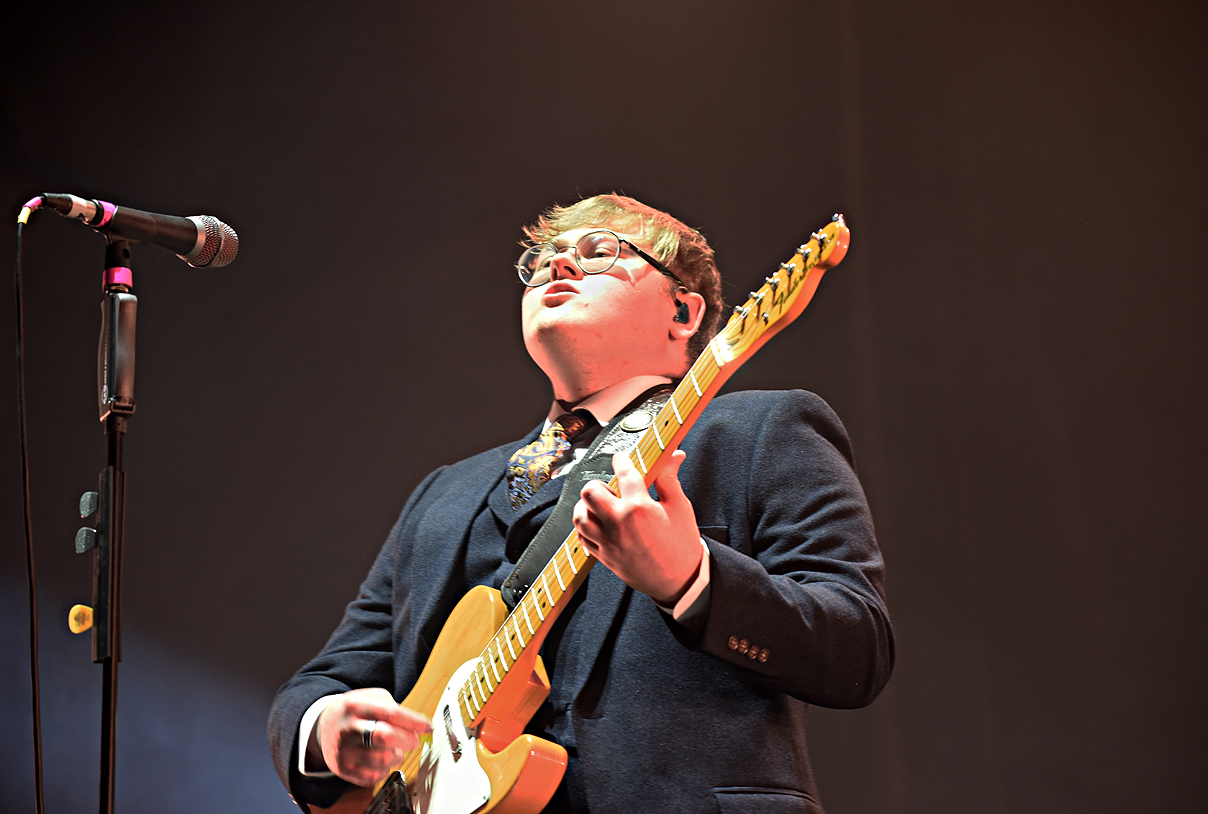 And now we’re off. Fight On ignites a mass of nodding heads, tapping feet and outstretched arms from those lucky enough to be experiencing this at close quarters. Maintaining momentum, we’re straight into Foolish Parley which almost inevitably reminds me of The Coral; not really surprising considering James Skelly’s role in their career.

The pace slows a little for the early song Crying Out before the jangling guitar intro of I Know That Much brings me back to more familiar territory. The Great Escape comes next. It’s got a beautiful melody combined with a more jangling guitar that underlines just how important Scott Concepcion‘s fretwork is to the band’s sound.

Around 30 minutes in, the band depart leaving Alex Moore alone with an acoustic guitar. Dispensing with his suit jacket, he cuts an impressive figure, dramatically backlight by dual white spotlights. He delivers quite beautiful, mesmerising renditions of I’ll Never Forget The Time I Spent With You and All My Life. The crowd are stilled apart from quiet, melodically murmured accompaniment to his words. It feels really special.

Once the others return and we’re presented with a semi-acoustic interlude. The album title track, How Beautiful Life Can Be really shines but the other couple of songs in the sequence seem to me to lack the impact of the rest of the set. Perhaps that’s down to my lack of familiarity though. 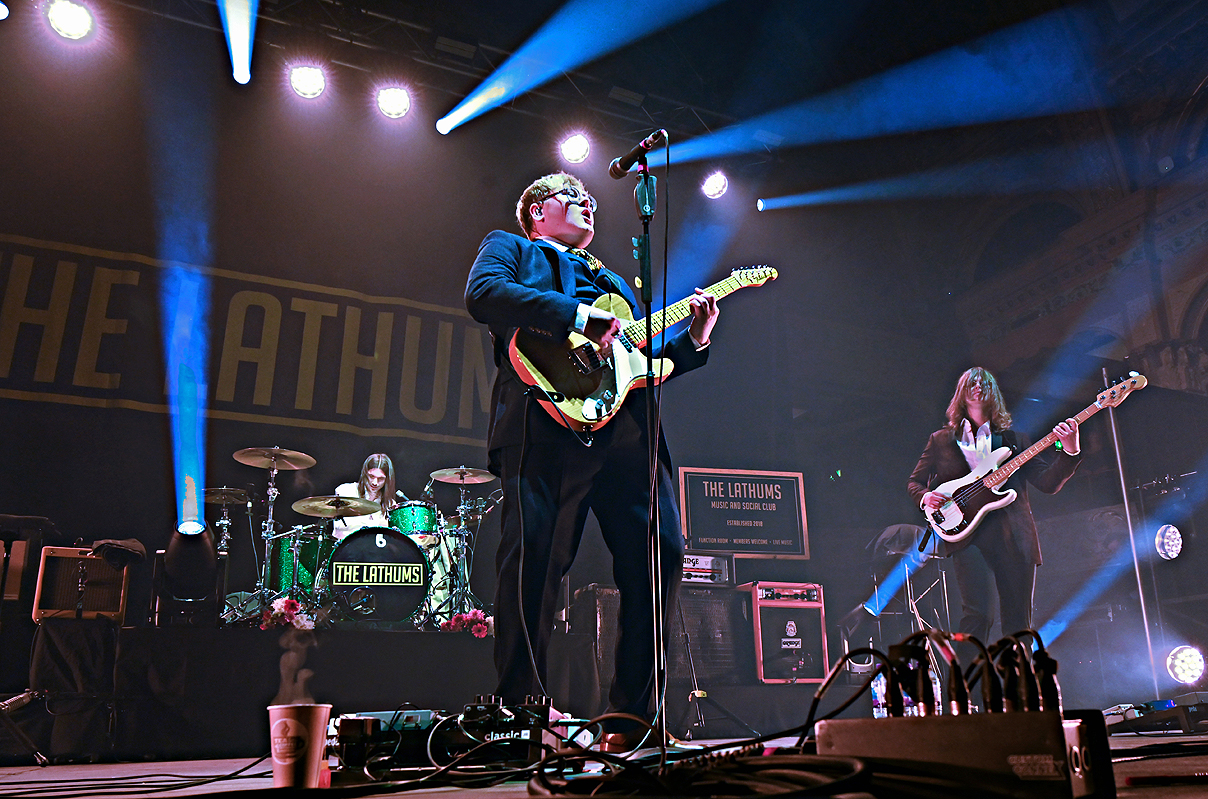 Pagans Delight with its pounding Doves like energy brings everything back to life, while the cossack inspired guitar lines of Wickerman incite outbursts of audience frenzy. It Won’t Take Long’s incessant blues-rock guitar intro transforms this little young band from Wigan into that little ol’ band from Texas. It’s pure ZZ Top! The Lathums morphing into a guitar-driven rock band.

Viewed from above, the floor of The Empress Ballroom resembles a gyrating, seething mass during the ska inspired final number; I See Your Ghost. As the song reaches its abrupt climax the audience erupts in a cacophony of cheering and applause. Plastic beer glasses and their partly consumed contents are launched into the air. Once things eventually settle Alex Moore stands centre stage, thanking the audience once more. He’s quite emotional as he tells us how momentous tonight has been for the band.

Returning for an encore, Alex seems to signal the removal of the final vestiges of decorum. With his suit jacket and waistcoat already gone his tie is almost ceremonially thrown into the crowd. They begin slowly with The Redemption Of Sonic Beauty which presents the visually moving sight of their frontman dancing with his mike stand, bringing to mind a schmaltzy last dance at a wedding. 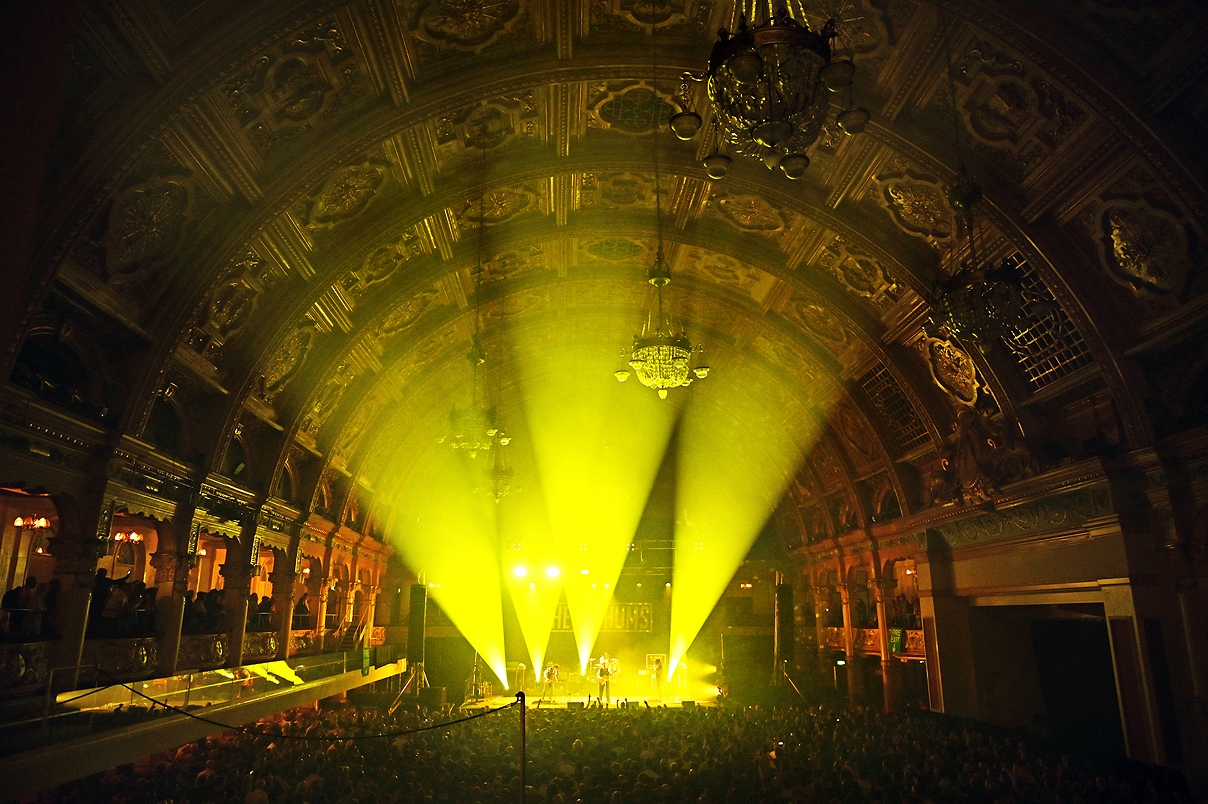 The opening lines of the final track, Artificial Screens could easily be early Arctic Monkeys, but sonically it steadily builds toward a guitar-driven mini opus. This really is Scott Conception’s moment to shine, but we can’t take our eyes off Alex Moore. He’s utterly lost in the music; stomping back and forth across the stage, pummelling the air in front of his chest with his fists. From a distance, this white-shirted figure adorned with braces resembles a vision of Meatloaf reincarnated.

As the final chords of the song bring us to a climax, Alex picks up his guitar and throws it skyward into the vaulted heights of The Empress Ballroom. He watches intently as it crashes down onto the stage at his feet. He’s in a euphoric state, utterly spent, but leaves us with a final heartfelt thank you, telling us what a milestone event the gig has been for him and the band.

I’ve been privileged to witness some special gigs at The Empress Ballroom. Watching The White Stripes on the nights that they filmed Under Blackpool Lights was one. Seeing Arcade Fire arrive by tram, masquerading as The Reflektors, another. Well for me, Saturday night was up there with these. It’s hard to predict how far The Lathums upward trajectory will take them but Alex Moore was right. It was a milestone event. A special gig at a special venue that neither the band nor their fans will forget.