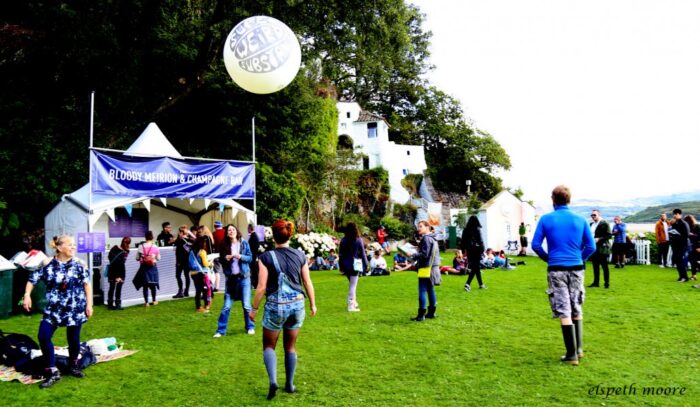 When Shaun Ryder, no less, tells you he’s going to make an exception to his festival habit of “getting in and out as soon as” in order to explore the site with his young daughters, who wouldn’t opt to join him in seeking out every No.6 curio?

More from the Black Grape frontman in an LTW chat soon, also featuring cohort Kermit, but suffice to say their Sunday set in Port Meirion crackled with all the deviant defiance you’d have expected as well as a proposal you wouldn’t.

Punters were flooding in from the Thursday to this accessibility-challenging tourist attraction in its own right. And although having a proper look round was obligatory, it proved no more possible here to be in more than one place at the same time.

So, talking of clashes, Grape were a fine example of what you risked missing if you checked out In Place of War‘s musicians in the village, for example, or Mike Garry closing Joe Duddell’s residency in the stunning Town Hall (pictured below).

Although Garry called his posh backing band a quartet this really was the only verbal foot he managed to put wrong, and the room as he introduced St Anthony (‘what are we playing again? oh, yeah, it’s No.1’) magically joined him in rising to the occasion.

Arranger Duddell was chuffed with how a weekend’s curation had gone, except for the failure to publicise the unavoidable absence of Edwyn Collins… so get well soon, Grace!

No doubt one of the less enviable tasks, for those wearing hi-viz jackets of the weekend, was coaxing the throng from the floating disco floor set in an idyllic, elevated woodland clearing.

As speculation grew centred on some terrorist plot against some cabinet minister or other’s underage son or daughter, all the fuss turned out merely to be in aid of giving a roving troupe of hoofers another run-out in their 1930s garb.

Don’t expect War and Peace on the Membranes at Twin Peaks by the way, but amid considerable competition the venue itself may well have been the most impressive nook at No.6 of all. 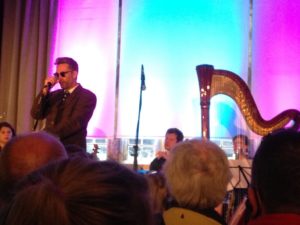 The Gatehouse rivalled the great outdoors for compelling bookings thanks in part to Gruff Rhys and Finders Keepers, although your experience of the Gatehouse would have pretty much been defined by whether you got there in time to beat those queues or not.

Anyone expecting a performance erring on the ornamental from the one and only Grace Jones would presumably have held up their hands by the time she had hula-hooped through the entirety of Slave to the Rhythm.

Despite the anticlimax of being denied La Vie en Rose it was worth girding yourself for the curtain-closing 808 State before calling it a Sunday night.
Rewinding a touch, both Ghostpoet and Metronomy were others who wrestled with high expectations only duly to deliver, while a chat proved revealing before Everything Everything took to the stage on Saturday which transformed from iStage to Pavilion on a nightly basis.

Bassist Jeremy Pritchard welcomed Everything Everything’s pseudo-house band status and previewed a cathartic set by explaining: “We always walk the balance of a boring reproduction of the songs as we recorded them and a complete indulgent disregard, but we never stray into either camp and stay pretty faithful to the records at a festival.

“We were saying on our way in, ‘we can’t do this one again for at least five years, not until we headline’, but we’ve no qualms being so closely associated with this festival, given the sense of eccentricity it is based on.”

On the rising cost for your average punter, he conceded: “It does sound like a lot but then for the experience you get and the calibre of artist, of whom you can see an unlimited number… the price has probably risen in an exactly inverse way to record sales falling, and live is where bands make their money nowadays.

“I do know people who don’t go to any bands when they go to a festival but I would never like to think it’s the preserve of wealthier people because things start to decline culturally when that’s the case.

“And I don’t think you can honestly say No.6 is an indicator of that.”

You might think there’d have been clashes of a different variety given the weight of glamping numbers and the amount of subsidised guests from the locality including various partners from Virgin and assorted hotel staff.
Not so, but when Steve Coogan addressed the piazza in as awkward an interview as any conducted by his alter ego, the oddest nugget to be unearthed had to be the fact that the hotel which hosted a fictional Coogan tryst in gastro TV show The Trip actually received requests to be served in their restaurant by the woman in question… who happens to be an actress.
Mancunian club Legends stalwart Greg Wilson and Kermit cooked up something special down at the Estuary Stage on Saturday, which, given its pool and recliners, should surely have been rechristened Club Tropicana (featured pic by Elspeth Moore).

Under the name Super Weird Happening 6, poetry morphed on the makeshift dancefloor with Stooges and sundry B-boys and girls, culminating in a memorable Bob Marley serenade.

So whether you got Lost in the Woods, pressganged by junior pirates or, as Mr Pritchard’s aquaintances claimed, avoided the bands altogether, there was never a dull moment and No.6, in celebrating its fourth year, showed every sign it is here to stay.

All words by Alex G. More writing by Alex on Louder Than War can be found here.