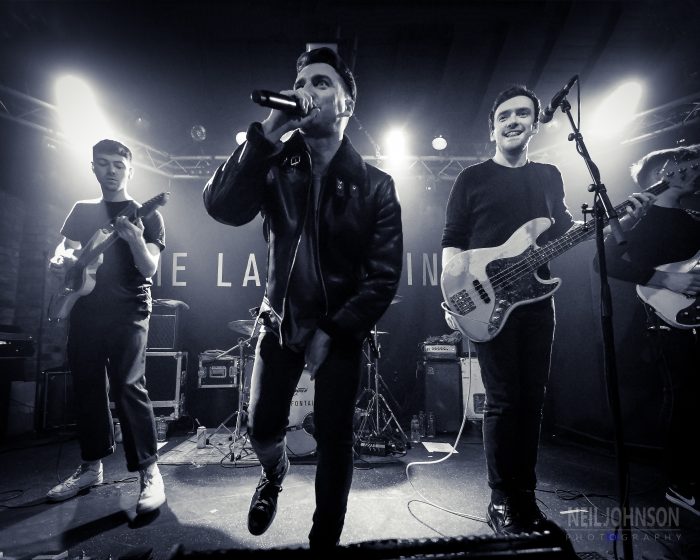 The LaFontaines offer a contradictory proposition, blending rap, pop and rock provide more than a subtle whiff of desperation, yet they were awarded Best Scottish Live Act in 2013 and both critics and fans are so passionate in support that they are hard to ignore. Neil Johnson drops by the Rock City Basement in Nottingham for the last night of their tour to see what all of the fuss is about.

This is the second time for the Motherwell five-pice in Nottingham. Tonight is the last night of their twelve date UK tour for their new record Common Problem, which we reviewed last month. They have continued to build a strong following  since their debut release of Class and many live shows across the country. 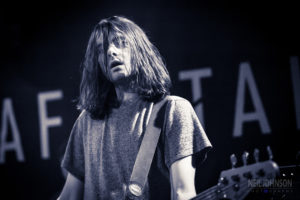 Tonight’s support is by October Drift, who come out to a fairly sparse crowd, which is a shame. We wrote about them back in 2015 as a band to watch out for. They are a pleasure to watch tonight, I’m not sure I’ve ever witnessed such vigorous guitar playing, but they produce a thick grungy, velvety smooth wall of lusciousness that is a delight. By the end of their set the Rock City Basement has filled out with a sea of swaying bodies.

During changeover the crowd is super friendly, lots of discussions about the LaFontaines set at Download back in the summer and what everyone hopes is on the setlist.

We kick off with Slow Elvis, John Gerard’s bass thundering along with Kerr Okan’s vocals stabbing through. Following by Junior Dragon, an altogether funkier track which has everyone jumping. Moving on to Atlas, everyone is settling into the gig. Kerr is enjoying a lot of banter in-between songs, he is charismatic and engaging, a man clearly at home with an audience and a natural entertainer.

The setlist covered all of their notable tracks, musically the highlights for me were Release the Hounds, King and Torture, which was utterly divine live. It wasn’t just the music that entertained, the crowd began waving their thumbs in unison at the band, to which Kerr had the whole band reciprocate. Later where the set-list had an encore break, the band announced that they couldn’t be bothered to go off and instead they asked a few guys at the front go out into the bands green room and then had the crowd go crazy as they came back out.

What surprised me the most is that almost everyone in the room knows the bands back catalogue intimately, word perfect vocals from the Rock City Basement crowd as Kerr leans over the metal catch fence at the front. This is especially evident during King, which is an absolute monster of a song in the live show.

In summary, this is a no fuss group of guys, doing what they do and having an absolute blast. For a couple of hours in the live show, they take everyone in the room along with them on the ride.