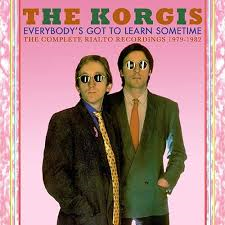 The Korgis – Everybody’s Got To Learn Sometime

The complete recorded works 79-82 from whacky Prog Rockers Stackridge’s New Wave spin-off band the Korgis, including the self-titled debut LP, 1980’s “Dumb Waiters” and 81’s “Sticky George”….Ian Canty tries to get to the bottom of the “skinny tie Pop symphonies” from the world’s least fashionable band…..

Ah The Korgis, the band whose genteel take on the New Wave made the Jags look like Crass and who resembled 35 year old chemistry teachers dressed up as Elvis Costello and the Attractions! But putting aside any concerns about “street credibility” (they didn’t actually possess any), they did turn out some classy pop confections over the three year period this exhaustive compilation covers and certainly outstripped the likes of the Buggles in the “Fairlight toting nerdpop/Electronica” stakes.

Andy Davis and James Warren had helmed Stackridge for the previous decade, a West Country outfit specialising in eccentric Prog-Pop that had almost broken through to the national charts with “The Man In The Bowler Hat” (produced by George Martin), but by the time 1979 arrived it was clear that this expansive approach wouldn’t cut the mustard in what was essentially a whole new music world. Honing their songs back down to the basics they found a niche in the market for people who thought Joe Jackson was “one of them there Punk Rockers” with their debut single “Young ‘n’ Russian”. That proved a bit too way out for their target audience, but “If I Had You” (to me this song seems to contain a strange touch of Demis Roussos!) did the trick, getting them to number 13 and on “Top Of The Pops”. A debut LP followed, the best songs being the knowing “Art School Annexe” and “Boots And Shoes”. “If I Had You” was the start of a stuttering chart career which climaxed with the frankly lovely synthpop of “Everybody’s Got To Learn Sometime”. Now I’m not going to hear anything against that song, a classic in anyone’s book and a deserved smash hit.

They struggled to follow up such a key record, something that may have contributed and is a surprise to find out via the sleeve-notes, is that behind the scenes Davis and Warren were for the most part at loggerheads for the entire duration of the band’s existence. Indeed the former left during the making of their second album “Dumb Waiters” (cut just as after the Punk maelstrom subsided in 1980 as there appeared an opening for verdant synth pop, something which fitted the Korgis like a glove) meaning that Warren had to re-record all the vocal tracks. This remains their best recording, playful, gorgeous and throwaway, totally unfashionable but somehow capturing the moment. Davies had re-joined the band by the time of their swansong “Sticky George”, but despite being full of good tunes like the title track and the odd classical touch, their moment had passed. The album was met with an underwhelming reception and the Korgis had they split up by 1982, though they have revived the name a few times since, most recently in 2015.

Listening to this now it is clear that the Korgis “New Wave” was practically all window dressing: they had cut out the solos and improv, but were still steeped in 3 minute Beatles style mini-masterworks and their modus operandi isn’t actually that far away from the output of (cough!) 10CC at the time. The prototype had only been amended really. Very clever, often witty but always well written and catchy songs that have been worked on very hard in the studio (this is where they deviated from the Stackridge model, they didn’t seem to thrive in the live environment as their forerunners once had). They hit a high point with “Dumb Waiters” without doubt their best outing, but it didn’t really leave them anywhere to go after the elegantly chiselled, beautifully rendered pieces contained therein.

The Korgis didn’t break any barriers, weren’t firey young hellions intent on taking on the music biz establishment and did sort-of bandwagon jump on the New Wave scene they had no real qualifications to be on. But on the plus side they made some high quality lush pop music and there will always be a place for that. This collection is a textbook case of craftsmen at work.