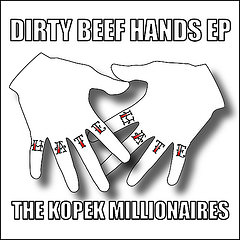 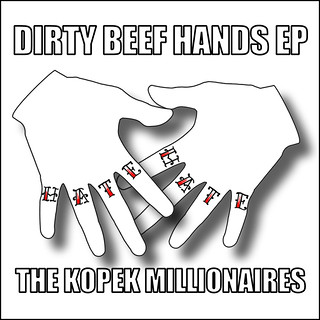 Interestingly titled seven track EP from the prodigious Kopek Millionaires; this follows the debut full length album ‘Always At Never With’ album that burst forth in April, though for that release the band assumed the full Johny Skullknuckles & The Kopek Millionaires moniker, further changes being that the band has switched from a studio project to a full live outfit having made their live debut at The Star & Garter, Manchester back in March.

‘Dirty Beef Hands’ reflects these changes, the song-writing whilst always strong has developed; it’s more fully fledged whilst retaining the glam tinged zeal…’Oh Lizzie Oh’ explodes with an exuberant chorus then ratchet’s it up a few more notches for good measure, before ‘So Sick In A’ revisits The Only Ones, though with added swagger and a neat “Stupid boy” courtesy of Capt. Mainwaring…

‘Half The Man’ is a real curveball, built around an infectious banjo refrain and Skullknuckles vocals complete with handclaps and alehouse chorus, radically different everything else The Kopek Millionaires have produced but at the same time it fits so snuggly – it’s this juxtaposition that perfectly sums up the band, they are not content to simply have found their niche; they are clearly on a journey of musical exploration, and a journey that began with Hanoi Rocks – but hey that really isn’t a bad starting point for any band.