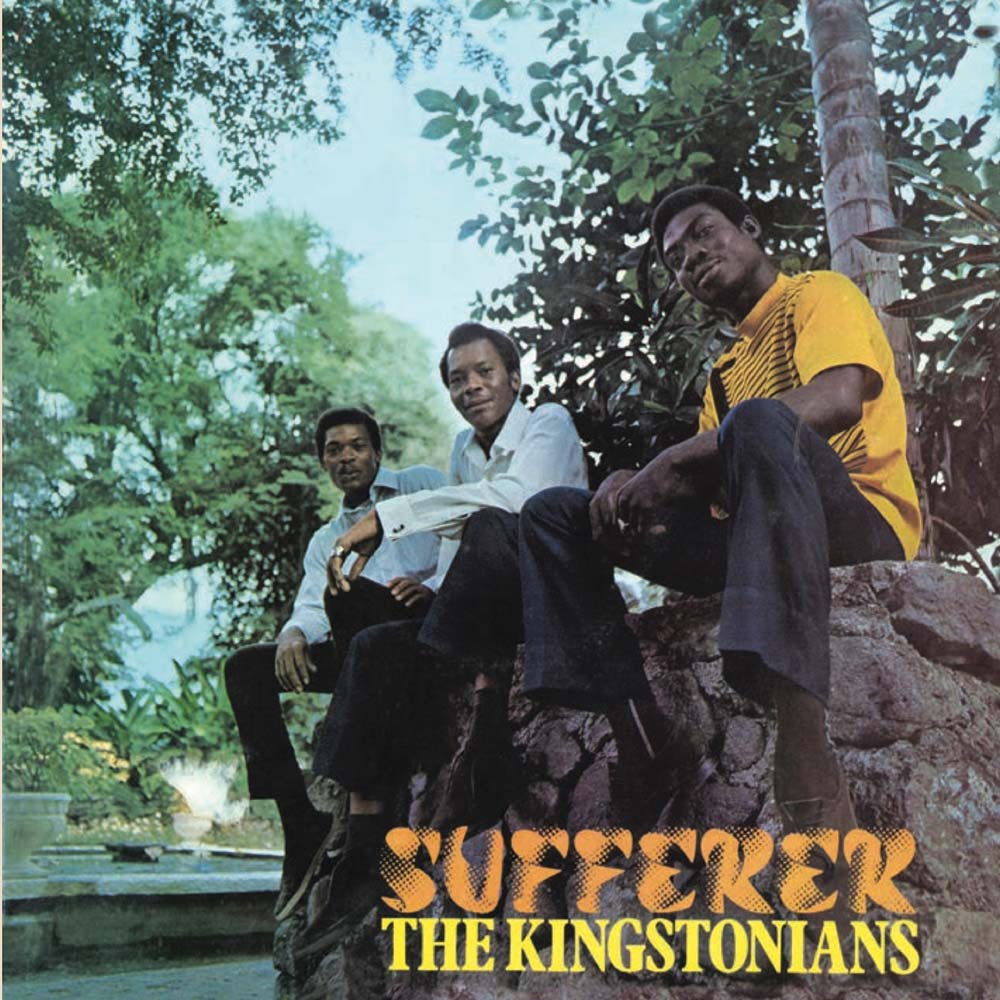 Reissue of the Reggae vocal trio’s sole album from 1970 complete with 12 bonus tracks rounding up all their recordings for the producer Derek Harriott…..Ian Canty hears an influential outfit that only burned brightly for a short time, but what a time…..

Though the Kingstonians didn’t quite manage to hit the UK charts during the Skinhead Reggae boom (or Boss Reggae if you prefer), the cuts they released over the two year period documented in this release were wildly popular on dancefloors if not quite making that jump into the mainstream. Back in Jamaica however they set the pace for others to follow.

They were very much a family act with brothers Jackie and Lloyd Barnard joining forces with cousin Lloyd Kerr and, initially, the unrelated Seaford Campbell (though he dropped out after a couple of singles for Studio One). They first made the breakthrough in their homeland in 1967 with Winey Winey (an updated Reggae version is included here) cut with JJ Johnson behind the decks. Though the band recorded a few more discs for Johnson in the Rocksteady era, as the rougher Reggae groove took over they flitted between him and other producers again until another JJ production Mix It Up made a stir and was included the classic Tighten Up Trojan compilation.

Though Mix It Up made waves, the Kingstonians next release was to be perhaps the one record they are remembered for. That was of course Sufferer, the title track of their only album, produced by Derek Harriott who would be a vital component in their success. The lyric depicted the plight of the Kingston’s poor, which would have a tragic resonance given the fortunes of the band’s members fates after their success. Married to a winning tune, Sufferer kicked up a storm on both the JA and UK Reggae scenes and launched the Kingstonians to the forefront of the Reggae boom. It also featured on the second in the Tighten Up series, a key artefact in Skinhead subculture. Though not having the hits of their competitors the Pioneers, their originality saw them viewed in their homeland as the premier vocal act.

After unleashing another cracking single in Singer Man and just as the Reggae boom was beginning to falter Sufferer, the album, appeared. Like a lot of Reggae LPs issued at the time Sufferer was mostly made up of single sides in an effort to cut expenses and get the most out of previously released material. Thus it is a little bitty and uneven at times but the tracks individually are a testament to the Kingstonians’ strengths. The closely grouped backing vocals perfectly compliment the lead and the stomping rhythm tracks were stuff of boot-boy dreams.

Rumble Rumble may not have had as great an impact as a single as its forebearers, but it’s a winning piece of rude Skinhead Reggae and The Clip plays to the band’s strengths – silky smooth vocals gracing an archetypal Reggae love song. Away from the singles, Complicated Scene has a great off-beat vocal line allied to nice skanking rhythms and Your Love comes with some of that “fairground” style organ that is very evocative of the times. Come We Go Moonwalk (also versioned on the only track on the original LP not to feature the Kings’ vocals Easy Ride Reggae) starts with a cracking guitar intro which gives way to a slow dancefloor killer that was almost a glance back to their Rocksteady days. The band’s Gospel roots, which were always somewhere in the background of their vocals, show through and enhance the ballad I’ll Be Around.

Though the album itself is a charming relic of the times, the vast majority of the tracks would still fill the floor at many a Reggae Revival show. The bonus offerings are not without interest either. Though producer Harriott was not on a par with Perry or Coxsone, some of the instrumental cuts here verge on primitive dub techniques and are garnished with strange echoing vocals introductions/interludes. On most of these re-cuts the band were renamed the Crystalites. Undertaker’s Burial works well with the vocal distortions adding to the spooky atmosphere and Rumble Version 2 make use of the drop-out which would quickly become a Dub trademark.

Of the few vocal takes among the bonuses, Out There shows the band ahead of the game again as this track hints at Roots which was to come to prominence later in the 70s. Version two of this song that follows is sparser and more upbeat and Right From Wrong catches the band’s vocal skills in fine style. The collection ends with the bizarre medley Version From 3, which bolts together Sufferer, Singer Man and Winey Winey in a curious and, it has to be said, slightly ham-fisted kind of way.

After this album the Kingstonians’ star waned and they stuttered on until the mid-70s as a shadow of the band they once were. Band leader and song writer Jackie Barnard recorded with Lee Perry under the nom de plume of Jack Lord, but sadly he and his brother soon slid into penury and his cousin Kerr found himself a prison inmate. Jackie made an attempt to relaunch the Kingstonians in 1998, but after that failed to come to fruition he returned to the life of a sufferer in Kingston, scraping a living until he passed away in September 2014 at the age of 66.

If I had one slight gripe with what is overall a fine reissue it would be that the sleeve-notes, which ably depict the Kingstonians rise and fall, don’t have much information around the album’s recording and release. Though to be fair the writer Lance Cane-Honeysett does explain that information about the group is scant at best even in the internet age and he can be commended for pulling what he did together. This aside we’re really in moonstomping heaven with sometimes sweet, sometimes impassioned voices combining with crunching rhythms to great effect, the true spirit of 69/70. All of which adds up to another quality release on the reactivated Doctor Bird label.