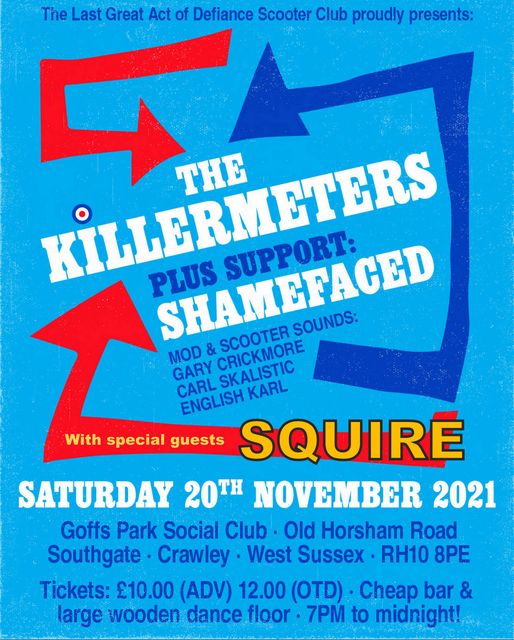 The Killermeters and Squire, Mod ’79 heroes, play a rare live date at…

The Last Great Act Of Defiance Scooter Club present a Mod ’79 double bill in West Sussex. Huddersfield heroes The Killermeters are joined by Anthony Meynell’s Squire, with Shamefaced and a host of DJs offering sterling support. Ian Canty gets another opportunity to sport his boating blazer…

A trip to Goffs Park Social Club, Crawley on Saturday 20 November 2021 will provide the rare opportunity to see two of the 1979 mod scene’s most underrated bands in action. From Huddersfield come The Killermeters, still fronted by Vic Vespa and with Mick Moore on guitar. They have a history that reaches right back to 1977, when the band were known as The Killer Meters and the singer went by the sobriquet Vic Vomit. As a punk band they struggled to make headway, but as both Mick and Vic were big fans 1960’s music it was no surprise when they launched the craftily retitled Killermeters as a five piece mod group with the Ruttle brothers Sid and Tony, plus Graham Jessop on drums.

They quickly managed to carve out a reputation as a fine live act and became firm favourites of the Northern scooter clubs. In 1979, on their own Psycho label, they released their first single Why Should It Happen To Me/Cardiac Arrest. Growing popularity saw The Killermeters support The Undertones and they signed to Gem Records, then the home of punk Top 40 chart stars The UK Subs. Unfortunately the label didn’t really know what to do with the band and only one single Twisted Wheel/SS225 emerged. As time went on The Killermeters began to dip their toes in psychedelia and eventually switched their name to Soldiers Are Dreamers to reflect this change of emphasis.

The Killermeters reformed with Vic and Mick now joined by a guitarist Aussie Martin and Steve Dutton on drums. Determined not to rest on their laurels, they released a self titled album in 2017 on Confidential Records and still promise a hot night as a live band.

Woking’s Squire formed in 1978. The arrival of singer/songsmith Anthony Meynell was a quantum leap for the band and they quickly assembled a set of mod friendly tunes which exploded with youthful energy. They put out one of the very first mod revival singles in 1979 Get Ready To Go, released on the short-lived Rok imprint. They followed this with the genuine anthem Walking Down Kings Road on Secret Affair’s I-Spy label.

But arguably they had even better in store, with the excellent Get Smart coming after the mod revival had petered out in 1983. This collection found Squire fully embracing psych elements in a pop context and was a resounding success. I have caught Squire live a few of times over the past 10 years and their energy and way with a cool tune has had me feeling on a high afterwards each time.

In addition to these two great live acts, indie pop contenders Shamefaced plus DJs Carl Skalistic, Gary Crickmore and English Karl will be making sure things go with a bang. With doors opening at 7pm and the gig running to midnight, it promise to be a one-off and a night not to be missed.

Advance tickets can be obtained here for £10, with admission charge on the door being £12