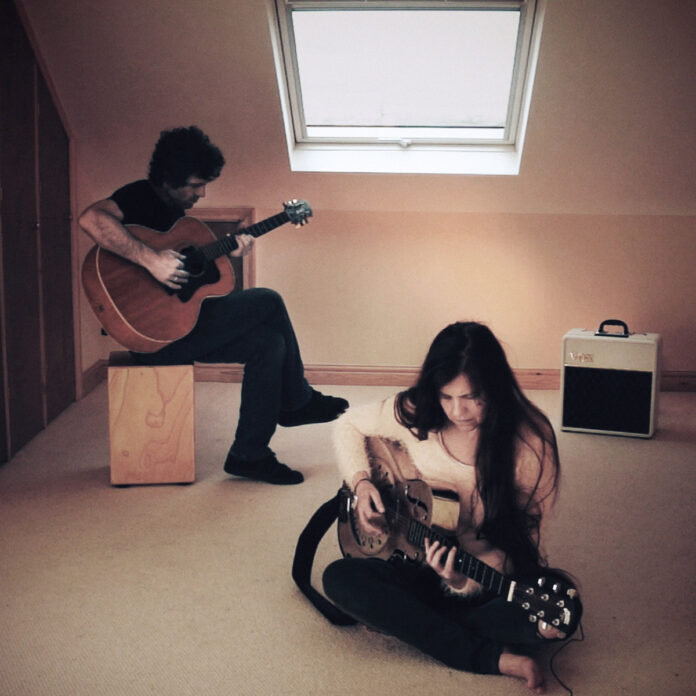 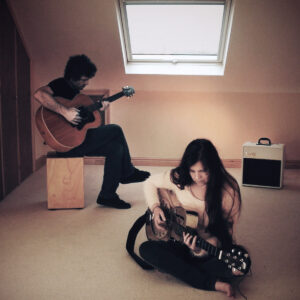 The Jesus Bolt: The Kid Got Electric  (Lupine)

Northerners living in Bristol, both ex-Blue Aeroplanes guitarists. Former frontman with Witness, Gerard Starkie and co-pilot with Flux Capacitors, Hazel Winter are the Jesus Bolt.  After some interesting EP’s comes a bewildering album.  Ged Babey tries to be objective about the crazy-cat-lady and her trophy-toy-boy who happen to be two very fine songwriters indeed.

This is a hard album to describe…. Genre-fluid (Alternative blues, skiffle-folk, bohemian art-pop …?)  It’s a difficult album, which takes a few listens. Great songs but some tough subject matter and odd detours…

Hazel and Gerard are a couple as well as a musical unit. They haven’t been together for that long – despite having known each other for some time. They were both guitarists in Blue Aeroplanes at one time or other.  They live together, make music both together and separately. Despite having a now full-grown cat still-called The Kitten of Love, this isn’t a lovey-dovey relationship album.  It’s more the couple telling each other stories about their pasts and jamming until they become fully fledged songs. I wandered through, the collected memories of you ….sings Starkie at one point.

Hazel Winter is pretty much an open-book because of her previous artistic output: Solo albums, ‘Bleak’ Blogs, poems and her Flux Capacitors songs tell the stories of her life: from suicidal thoughts (Telephone Triage Assessment) to tales of touring and support slots where they nicked other bands riders… and everything in between.  All told with a wicked sense of gallows humour.

Gerards songs seem more lyrically vague, descriptive but non-specific. He has a fantastic singing voice – clear and tunefully enunciated.  Hazel varies between fast-paced semi-spoken narration and folky harmonising. They work well together and the songs are fascinating, beautiful and strange.  There is a fair bit of melancholy and less of the black humour that runs through Flux Capacitors songs.

Blackrod is a place in Bolton it seems, I asked Hazel about the song:

Starkie grew up in Blackrod, which, all I know about is his take on it. Weirdly as with all the stuff of his he’s given me, when he jammed it through I instinctively harmonised on it even though I’ve never thought of myself as a harmony singer.  Then all these old guitar riffs I’d played years ago but which I’d given up on cuz I could never make them work, sort of popped out. And they worked. Then we were on a roll and he asked me to write a verse which I’ve never done on anybody else’s song before and it felt dead weird…

The lyrics throughout the album are great: full of lovely old expressions like ‘Who’s ‘she’ the cats mother?’ More modern ones: Post-It Notes with Life-affirming quotes. and ‘Take it as read. Delete that thread.  And neat turns of phrase:  Less a nightmare, more a dream gone wrong if you-ask-me.

Musically it’s a bit of folk, blues, hippy-jamming and occasional art-school dissonance – not really my post-punk specialist area – but the strength of the song lyrics and blending of their voices make the Jesus Bolt compulsive listening.  And I like the bits where they sound like the Velvet Underground. A Suitable Disguise has a guitar solo which sounds like Robert Quine playing with Dire Straits!  Another song called Locals has a guitar solo which sounds like it is being strangled.

Penultimate track Bright Burning is a Hazel Winter prose poem which first appeared on a Bleak Blog ten years back.  A poetic and painfully sad account of miscarriage to rival ‘Baby shoes, for sale, never worn’.

The closing track is the most kick-ass in a PJ Harvey channelling Beefheart kind of style.  Called Catherine De Medici I asked Ms Winter what it was about….

That was me trying to express being beyond rage at a shit fest of betrayal and abuse which had long-reaching tendrils which slithered down through many many years and had catastrophic consequences. When I was endlessly picking over it and trying to fathom it , and retrace it, it felt medieval in its torturous brutality ….I had the idea of it finally exploding into a hunting scene with its orchestrated savagery and ceremony.

…I started researching Catherine De Medici. Fucking hell. She loved her husband the King, and bore him several children but he loved his mistress. She seemed to deal with her anguish by controlling the children she bore him. She was particularly keen to manipulate who her sons married or took as mistresses and seemed to enjoy exerting this control over her destiny by proxy.

The single Flaming Car is one of many highlights and despite being an album which  doesn’t quite flow as well as it could, Kid Got Electric is an idiosyncratic and enjoyable triumph.

Two songwriters whose lives have become romantically entwined seeing if they can find out what makes each other tick as they combine artistic forces. Naming the band (or project) The Jesus Bolt, after a vital piece of metal that holds a helicopter blade in place seems appropriate.  The art (with all it’s honesty, pain and openness) could well be the key to holding a relationship together and keeping it strong.

All you need is (a kitten of) Love.