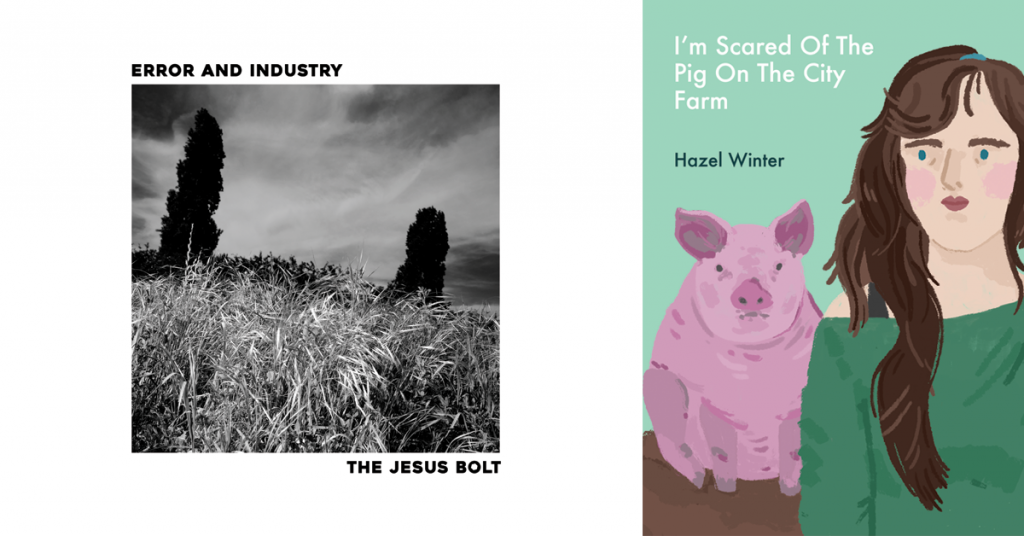 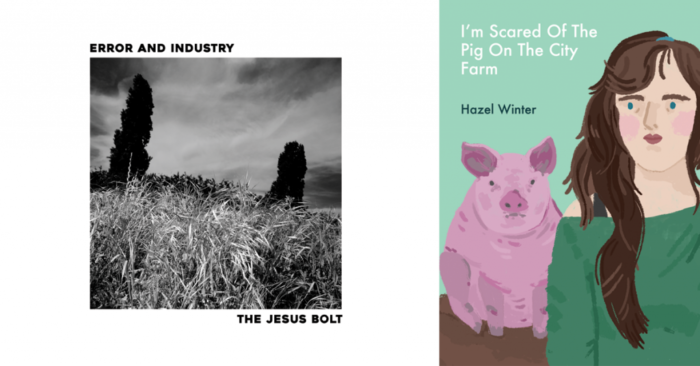 Hazel Winter : I’m Scared of the Pig on the City Farm    (Self Published)
Paperback only

Hazel Winter is what is called a Renaissance Woman -a singer, poet, video-maker, blogger, crazy-cat-lady,  co-pilot in The Flux Capacitors, solo artist and a half of the Jesus Bolt.  A book of poetry and EP of strange folky music, simultaneously released, bamboozles Ged Babey slightly…

‘A creative incontinent’ is how a better journalist than I described an artist I like.  It’s a strange description.  The creativity flows and will not stop… but the intimation perhaps is that it’s like ….shit.  The intended meaning I imagine is that the creativity, the art, flows, despite little or no financial reward or recognition…

Hazel Winter is a creative incontinent – which is appropriate, not because she’s shit but because her poetry collection includes accounts of colonoscopies, a trans-vaginal scan, menopause, tests for cancer and a Telephone Triage Assessment.  (Balanced out with poems about love, travel, animals, life and gigging – it’s not all middle-aged ‘Bermuda Triangle of Health’ verse.)  So, she may well be incontinent, but I’m sure she does it creatively.

Hazel Winter is a barely-known cult-heroine, big in the Bristol area,  when she should be a household name.

In a parallel universe she would be on Loose Women, Radio 4 and Jonathan Ross cutting thru the crap with a quip and a story or a poem and a song.  Like the cross between Pam Ayres and Boudicia that she is .  Or a mixture of  PJ Harvey, Victoria Wood and Ian Dury, as I described her as when I reviewed the Flux Capacitors album Courtesan.

It was one of my favourites of 2018. An album full of joy and pain, humour and bottleneck guitar blues. A unique collaboration between Winter and  fellow Vegan, ‘adopted nephew’ Commander Micheal McNeil.  It even had some of Hazels poetry between the songs – the ones relating to the fun and travails of being in a support band: Nicking the rider belonging to the Blockheads and the Three Drumkits on One Stage scenario are covered with great wit.  They are included in the book – a compilation of her poetry – “Surreal adventures in Bristol and beyond”

Hazel Winter’s first book of poetry, ‘I’m Scared of the Pig on the City Farm’, was informed by some curious happenings: there were ill- advised hitch hiking trips to Greenham Common, expeditions searching for Shaman in Siberia and playing guitar on Glastonbury Pyramid stage, but it wasn’t until the early morning pig-related trauma on Bristol’s Windmill Hill City Farm allotments that the poetic muse grunted her way into sentience. Pad down the winding pathways of muddy trotter-printed poetic fairyland with her…

There’s more to Winter’s work than punchline humour, however. Things take a more poignant turn with ‘Bright/Burning’, which tackles miscarriage, while ‘Transvaginal Scan’ and ‘Menopause’ take on women’s health issues.

This release of the first collection of her poems is the culmination of many years of writing and filming her spoken word pieces.

Between 2009 and 2018 Hazel posted thirty-three of her Bleak Blogs on her YouTube Channel  They are home-filmed performances of autobiographical poems about her life, her health, her career and her relationships, with animals, humans and herself.  They are all imbued with a Northern gallows humour and cynicism but also a resilient joy of the unpredictability of life.  They are only snapshots of course, the full-picture would be very complex.   One poem,  became a Flux Capacitors Song and video and tackles suicidal feelings in such a way as only Hazel could.

The book brings all of  her very best work together on paper – which is nice – but the thing about poetry is, I find, you have to know what the authorial voice actually sounds like.  This is easy of course in this case. If you like her music, you’ll love her poetry. But it needs to be read far and wide…

How Ms Winter finds the larger audience she deserves…. fuck knows, but I hope she does.

Just to complicate things further, she goes and forms the Jesus Bolt – a duo – Hazel and her beau Gerard Starkie (who I didn’t know was also in Blue Aeroplanes and one point as well as fronting a band called Witness in the 1990s – not to be confused with A Witness -the C86 spikey-politicos).

The Jesus Bolt seem to be a vehicle for the songs Hazel co-writes with Gerrard  so are not suited to the Flux Capacitors charabang – a more piss-takey punk-rock-blues affair.  The Jesus Bolt are more folky impov and serious.

Of the the three songs the first is a campfire folk epic,’No Ghosts in Blackrod’  the second has a la la-la-la laa refrain which sticks in your brain  and the last is a drones and spoken word affair, ‘the Bad Fairy’, which I just can’t get on with no matter how many times I try.

Blackrod is a place in Bolton it seems, I asked Hazel about the song…

Starkie grew up in Blackrod, which is all I know about his take on it. Weirdly as with all the stuff of his he’s given me ,when he jammed it through I instinctively harmonised on it even though I’ve never thought of myself as a harmony singer. That night I had a dream I’d made a massive circular journey on a foggy mountainside , on horseback, and ended up back where id started many years before and then all these old guitar riffs I’d played years ago but which id given up on cuz I could never make them work, sort of popped out. And they worked. Then we were on a roll and he asked me to write a verse which I’ve never done on anybody else’s song before and it felt dead weird but that slid out quickly as well.

(Oh God. She said ‘slid out’,  we’re back to creative incontinence…)

Future plans for the Jesus Bolt are “We’re going back into Bink Bonk ( fave Bristol studio) with John Langley (Blue Aeroplanes and Witness drummer who we’ve both done solo albums with) imminently to record an album!”

I didn’t need to ask about the origin of the band name now that we have Google… The Jesus Bolt is what holds a helicopter rotor blade in place.  Without it you’re fucked … and the next person you meet will be Jesus or his dad.

Hazel Winter: A Cross Between Pam Ayres and Boudicia; Not Shit and Big In The Bristol Area.   Buy her book and music or she’ll crash her helicopter into your house….