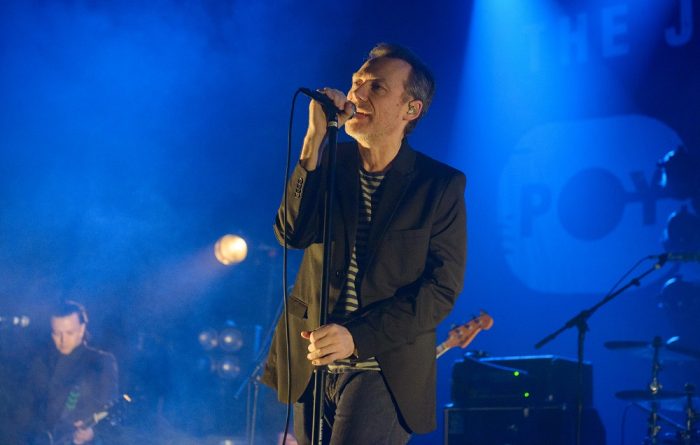 With their first record in twenty years behind them, as well as years of scorching sibling rivalry, one of alternative rock’s most influential bands made a squalling, sensational return to England’s Second City. Sam Lambeth bought the earplugs.

“Happy?” Jim Reid asks the crowd a few seconds after strolling onto the stage. He’s addressing the audience’s requests to turn up his mic (brother William’s feedback-drenched amp has already begun emitting its tinnitus-inducing turbulence), but in truth it’s a fittingly blanket question for The Jesus and Mary Chain, a band whose continuing survival is a shock to anyone who’s aware of their fractured past.

Happiness doesn’t come easy for the Mary Chain, and throughout their Birmingham set they remind the bulging crowd – a mix of younger, leather-clad zealots and pot-bellied purists suckling on an E they found in their old pair of flares – of their trials and tribulations through a career-spanning set.

Those without earplugs are instantly tinged with regret – and tinnitus – as the Reids and a gang of hired guns break into Amputation, the first track and lead single from the sublime new record Damage and Joy. The new LP has the principle trademarks of the Mary Chain sound, namely a sweet disposition splayed over bludgeoning fuzz, and while Always Sad’s key lyric “I think I’m always gonna be sad, cos you’re the best I’ve ever had” may sound trite, Jim Reid’s subsonic burr gives it a beautifully melancholic outlook.

One of the myriad reasons for the Mary Chain’s ascension was down to their ability to match swooning, heartfelt harmonies with swaths of destructive distortion. When they get the combination right, it’s unparalleled – April Skies is a soaring slice of atmospheric jangle pop, Head On is a wonderfully strutting slab of gritty arpeggios, and the underrated Between Planets balances barnstorming snares with William’s dextrous, tuneful fretwork.

As is expected, talking is at a bare minimum, and despite the Reid brothers attesting their days of disputes are dead, there’s still a fear a fight will break out every time Jim saunters towards William’s area. As they plough through the stately Reverence, the squalling Just Like Honey and Some Candy Talking, it hits home just how influential the Mary Chain have been – think (obviously) Primal Scream, Black Rebel Motorcycle Club and even early Kasabian – to legions of bands and new followers.

As they stride offstage with minimum fuss, they might be always sad, but their pain is the world’s gain.

The Jesus and Mary Chain are on Facebook and Twitter. Their new album, Damage and Joy, is out now.