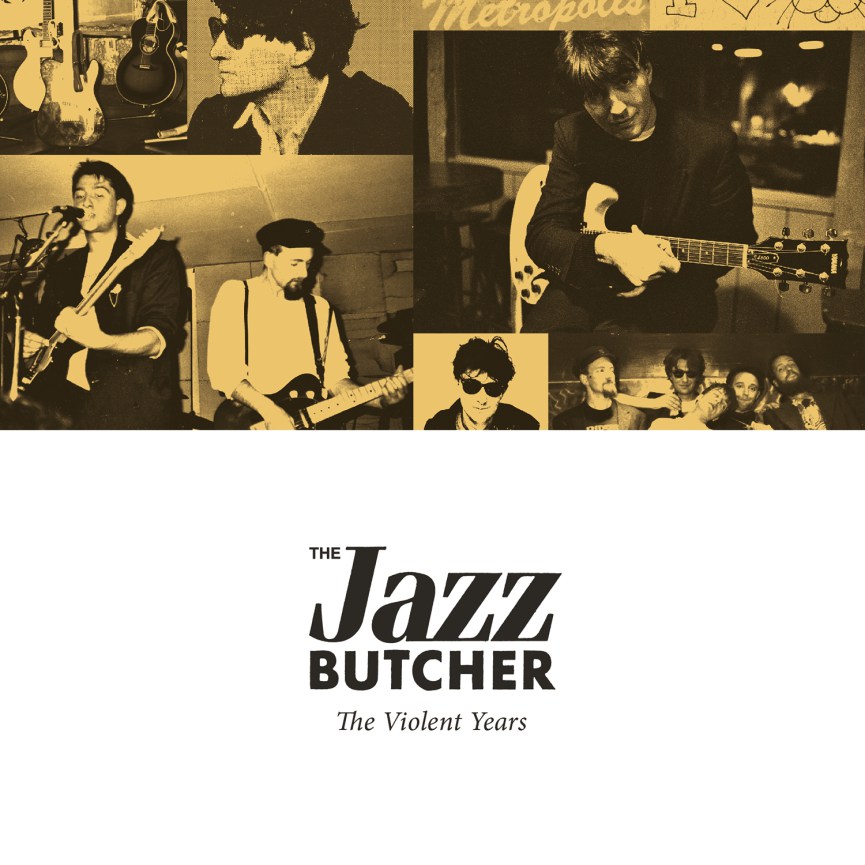 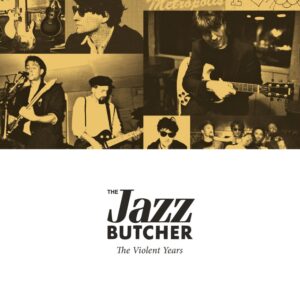 The Butcher’s middle period given the deluxe re-release treatment. Louder Than War reviews.

Continuing on from Fire Records excellent release last year of the Jazz Butcher’s Wasted Years – which compiled their first four albums – the label has now beautifully repackaged the bands next four albums which were released between 1988 and 1991 and titled them The Violent Years.

At the end of the ‘80s The Jazz Butcher had rightly earned a cult following, based on their clever lyrics mixed with a youthful melancholy and backed up with great tunes, but, as the decade began to collapse in on itself, so the band became the going concern of just one, main man Pat Fish. It was a hard time for the nation and there is a harder, freakier edge to these albums, but they are still unmistakably the work of the Butcher.

Fishcotheque, released in 1988, has a more mainstream pop sound than the albums that came before. But this is a pop that is cool and melancholic and a little shy of itself. Out Of Touch has a smooth, smart ass detective tension feel to it. Living In A Village has a carnivalesque sound, but the lyrics are a biting attack on small minded people. As he does on Chickentown, which is a great little rocker about those small towns where everybody is the same as everybody else. Mr Fish sounds angry. There is rockabilly fuzz guitar on Looking For Lot 49, and melancholic charm on Susie, the life story of a woman who keeps crossing his path. The Butcher does these slice of life songs so well. It is music to soothe a hangover.

There is a heavier, angrier sound to Big Planet, Scarey Planet Master, released in 1989. It has a wall of sound, with the songs sometimes being lost in the production, but the Butcher’s wit and vitriol rose above it all to give a state of the nation address. And it wasn’t good news. It opens with a psychedelic rocker New Invention, before moving onto Line of Death, a country beat populated by scary Americans. Hysteria has a touch of The Mission about it, whilst Bicycle Kid is a quirky little number about a very naughty boy, a symbol of the Tories. It has Syd Barrett undertones. We even get a touch of hip-hop/rap on Burglar of Love, and it works surprisingly well. The album closes with two great Jazz Butcher compositions which are something of a throwback to earlier numbers; Bad Dream Lover is about those lost chances with a woman and The Good Ones has a melancholy sound to wrap up the album.

On Cult Of The Basement, released in 1990, we get a hyper-frazzled Butcher. Is this his drug album? It sounds like it was recorded with the downer of alcohol and the uppers of speed. It does have high production values which gives a polished sound to the mayhem. Everything sounds ultra-real, ultra-bright, ultra-hyper and the songs are longer, as though, once in the groove, the band didn’t want to stop. Things are getting serious. There is the indie-pop fused, She’s On Drugs, the Lou Reed sounding Pineapple Tuesday and the melodramatic, Doctors of Madness influenced, The Onion Field. My Zeppelin is a weird country song about getting an airship and flying over various countries. There is The Kinks’ sounding Mr Odd and the distorted, heavy sound and paranoia of Panic 109. Girl Go has a mixture of rhythms and styles but with an over-arching dream world sound to it. It ends with Sister of Death which is something of a rock ballad. It’s a great song that delivers the sucker punch to a great album.

The final album in the collection is Condition Blue, released 1991. And, if Cult Of The Basement is the drug album, then this is the divorce album. The vocals sound bitter and angry at times, but they are offset by the laid back cool instrumentation. This is like Jazz Butcher but more so. It opens with Girls Say Yes which is a typically insightful, and left-field view, of relationships. Harlan has a laid-back groove and shows Pat Fish’s ability to conjure up images and a story with a modicum of words. Still and All has a very mournful sound and a guitar solo that sounds as though it was recorded in space. There is the indie-pop of She’s A Yo-Yo and the driving sound of Shirley MacLaine. It ends with the very smooth Racheland and the sentiment that these are the hardest times.

The Jazz Butcher always manages to conjure up a view of England from the outsider’s perspective, and always has a beautiful line in songs about relationships that bit deep into melancholy but never into maudlin.

Like a lot of people, I lost track of the Jazz Butcher at the end of the ‘80s, maybe he lost track of himself, too, but it’s clear I missed out on some great records at the time. Maybe you did to. Now we can all make amends and listen to the Butcher’s violent years.

You can find The Jazz Butcher on line here, and are on Facebook.