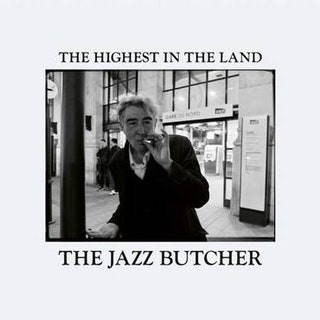 The Jazz Butcher: The Highest in the Land

The final, and farewell, album from The Jazz Butcher and its uniquely free spirited and offbeat frontman Pat Fish is a joyous celebration of his music. Trademarked by his wry observational humour, and cutting commentary on life, while at the same time containing a touching and often heartbreaking poignancy as he says goodbye across these nine sublime songs.

The Highest in the Land feels like Pat’s version of Bowie’s Blackstar (he makes a nod to Bowie alongside Lennon & Prince in Running on Fumes) or Leonard Cohen’s, You Want it Darker? A confrontation of his, and everyone else’s mortality, almost a knowing nod that this would be his parting shot.

Don’t get me wrong, the album isn’t filled with doom and gloom or a “woe is me” attitude. The album is classic Pat Fish, it is packed with his quirky dry sense of humour and pathos, and filled to bursting with his talent for painting vivid and eccentric imagery in his lyrics.

The album opens with a touching sense of reminiscence on the smoky late night jazz bar feel of Melanie Hargreaves’ Father’s Jaguar. It is a perfect illustration of the points made above without ever sounding dewy-eyed or contrived.

The second song and single, Time, was released around the the same time as Pat’s death, the lyrics really hitting hard then, and they haven’t lost their impact or poignancy over, well, time…

“My hair’s all wrong. My time ain’t long.
Fishy go to heaven, get along, get along.
I’m having too much fun to get anything done.
Leave me be. I’m not hurting anyone.”

With the songs on The Highest in the Land, Pat had hit a seam of gold in his songwriting. He was on top irascible form. Only he could come up with a lyric like “Existential threats pile up like mashed potato snow around my door, they say that fears a mans best friends, and every day it seems like I have more” on Running on Fumes. The song sounds like an upbeat caper but in actuality is a tetchy observation of the state of affairs in a post Brexit, COVID hit Britain where we’re all running on fumes.

The penultimate song, Sebastian’s Medication, is a hilarious romp making barbed digs at everything from gammons to political correctness, keyboard warriors and politicians. Still, the lyrics carry a sense of poignancy “you ain’t gonna get me just yet…no”.

The final song is the utterly beautiful Goodnight Sweetheart. Softly brushed drums and elegantly played guitar soundtrack the poignant nod heartfelt lyric. Pat’s last word on the album is “Goodnight”. It is delivered in such a manner that it leaves you totally bereft and emotionally drained.

This is an undoubtedly beautiful album. Given the lyrics and the circumstances of its release, it is often a difficult listen. Over time though (there is that word again), like the aforementioned Blackstar and You Want it Darker?, I’m sure these songs will be savoured and  this album enjoyed as one of the most special of releases in The Jazz Butcher catalogue.