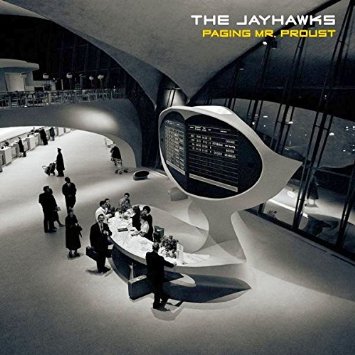 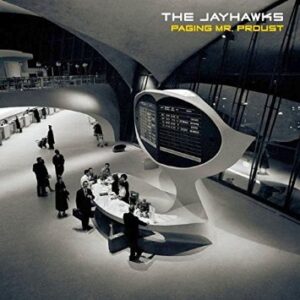 Minneapolis alt. country heroes return with a truncated line-up and a partial return to form. Joe Whyte gets misty-eyed and apologies in advance for gushing fanboy-ism.

I loved The Jayhawks. Really, truly loved them. Loved them like no other band of that era. As far as I was concerned, nothing and I mean NOTHING, came close to the sheer unadulterated joy and perfection of Hollywood Town Hall, Smile, Tomorrow The Green Grass and Sound Of Lies. Hell, even their slightly lo-fi, ramshackle proper debut Blue Earth (I’m ignoring the almost-demo “Bunkhouse Tapes” that preceded) kicked the arse out of anything else that was released in that eight-year run from 1992 to 2000. They were the band that were nearly famous, nearly-always charting and I didn’t care. Myself and many, many friends liked it better in that weird, music-snob way that declaimed that if the “norms” knew about them it would never be the same again. Jeez, one of my friends was so besotted by them that he gave his daughter the middle name Louris…..

Hollywood Town Hall was where it initially all gelled into sheer perfection. Big Star met The Replacements met Hank Williams met The Byrds met The Clash in Neil Young’s barn in a collision that was as near faultless as an album could be. The twin vocals of Mark Olson and Gary Louris were utterly heaven-sent; pathos, bathos, gladness, sadness  and righteous beauty shattered together in songs that were simply thrilling and unforgettable in equal measure. They could rock, too; Wichita and Two Angels saw the pealing guitars of Louris and Olson mesh effortlessly with the straight-to-the-point rhythms of Ken Callaghan and Marc Perlman.  Louris’s Arbiter Fuzzface pedal-driven guitar solos were a nod to Crazy Horse and his beloved punk and garage and added a sweet counterpoint to the country-blues of his and Olson’s songs. This was truly an album with no filler and filled a massive punk-shaped hole that had been missing from many peoples musical lives. Mine, certainly.

The albums that followed, if anything, were as good and at times even better. The sugar-sweet/acidic bitterness of the songs on Tomorrow The Green Grass  gave them their nearest miss with the big-time success that so often eluded the band. Blue and I’d Run Away  both brushed both the airwaves and the singles charts but the writing was on the wall by this point. Louris and Olson had been at loggerheads for some time as regards direction. Louris was heading more towards a rockier direction whilst Olson, always more of a traditional country fan, left the band at the same time as his wife, singer Victoria Williams, became seriously unwell necessitating his semi-retirement to care for her.  Olson went on to release a series of solo albums and recorded with Williams on her recovery.

Surprisingly, the band actually went from strength to strength despite the original principal writers departure; Louris took on main songwriting duties and the albums Sound Of Lies, Smile and Rainy Day Music at times eclipsed the original band. Big Star (from SOL) is a song with no imperfections and in my opinion, one of the greatest things ever committed to vinyl. I dare you to listen to this and not grin stupidly.

The days of being the darlings of the press and George Drakoulias producing the records was long gone. The band, however, were still a fearsome touring unit by this point and much of the vestiges of Olson’s country influence had been left in the dust of Louris and Marc Perlman’s psych-garage rocking. Keyboard player Karen Grotberg and drummer Tim O’Regan had joined by this point and The Jayhawks now had more in common with Green On Red and the 70’s Stones than Nashville and rhinestones.

Around this time, Louris was on a local Glasgow radio station doing an interview before a storming gig later that night at The Old Fruitmarket. When asked what his favourite record of all time was, he replied “Complete Control by The Clash”. If he was held in high regard by myself before, he reached exalted status just at that moment.

The band split, reformed and split again. A “reunion” album, with Olson back onboard, in 2011’s disappointing and at times phoned-in Mockingbird Time was a serious misjudgment; a tour of the “hits” and that self-same album was even worse. I witnessed a couple of the dates and the distance, both physical and emotional, between Olson and Louris onstage was virtually palpable; they could barely look at each other and if ever I’ve seen a band going through the motions, it was those nights.

Louris has apparently been struggling with a serious painkiller addiction in the years since then; little has been seen or heard from him or The Jayhawks until this album was announced a few months back. With REM’s indefatigable Peter Buck in the producers chair and Louris in main charge of the writing, (albeit there are a few band compositions) expectations have been high. Even the title had me slightly excited.

I’ll begin by saying it’s not entirely a return to form. It’s a very good album but it’s not quite up there with the great Jayhawks albums. That’s not a criticism; most bands would struggle to equal the output of The Jayhawks in their pomp.  It’s introverted at times and experimental at times. Not a bad thing, by any means; no-one would thank you for a Jayhawks-going-through-the-motions record again. We’ve had that in Mockingbird Time. Perhaps Louris needed to do this, make an album that reflects the tougher times he’s been through and godammit, we’re all older and not-much-wiser. He’s surely the same.

At the same time, “Proust” is a recognisable record; Louris’s guitar has the same snap and snarl in the solos and the lonesome country influence persists. His voice sounds different at times; in Comeback Kids his distinctive twangy croak is a more laid-back, cautious and reclusive beast. Again, it’s very clearly a Jayhawks record. opening song Quiet Corners & Empty Spaces is instantly distinguishable with its dual vocal harmonies courtesy of Louris and Grotberg’s flyaway voices and the effect-laden guitar solo that follows the chorus melody. Lost The Summer has a glam vibe and although on the whole less ebullient than the chorus would have you believe, its simply beautiful.

Lovers Of The Sun continues the triple whammy of the opening songs. Sounding not unlike The Go-Betweens at times, it’s a deceptively lightweight little thing that subsumes itself into an almost Velvets-y outro. Louris unleashes one of those trademark over-saturated guitar-set-to-stun lead breaks mid song and all is well with the world.

Pretty Roses in Your Hair leads off with quietly stroked acoustic chords and piano but again gives way to some crunching guitar and when Louris intones ” I held the stems of your decay” in the opening verses, you can really believe that they’re back. His voice, at times, recalls Stevie Winwood’s bluesey growl as the song tails off into feedback over sweet piano chords and pealing bells. Leaving The Monsters Behind is possibly about Louris’s struggles; I wouldn’t want to comment. What I will say, however, is that its soaring vocals and tick-tacking guitar made me think of The Who in a very positive sense. It’s another cracker.

Things change slightly with songs like Ace; it has a jazzy shuffle at its core and at times leans off towards post-punk and free jazz in its dissonance and skronky guitars. It actually drops into a syncopated, almost funky-dub piece as it fades and returns. I like this one a lot. I reckon most long-time ‘Hawks fans will, too. That’s the thing; I think we all pined for a “Jayhawks” album and when we got that in “Mockingbird Time” and were disappointed. I reckon, with the benefit of hindsight, that the beauty of the group was their ability to always keep moving whilst retaining that golden something that we all loved. To a large extent, it’s back with Paging Mr. Proust.

I’ll Be Your Key closes proceedings (although there is a bonus disc of extras for Pledgers) and is a honey-coated song of acoustic and swooning strings with those dual vocals as sweet as ever.

The album is most definitely not as immediate as previous outings, but is clearly a grower. The Jayhawks never, ever did things the easy way and it seems as if that’s the way they thrive.

It’s bloody good to have them back.