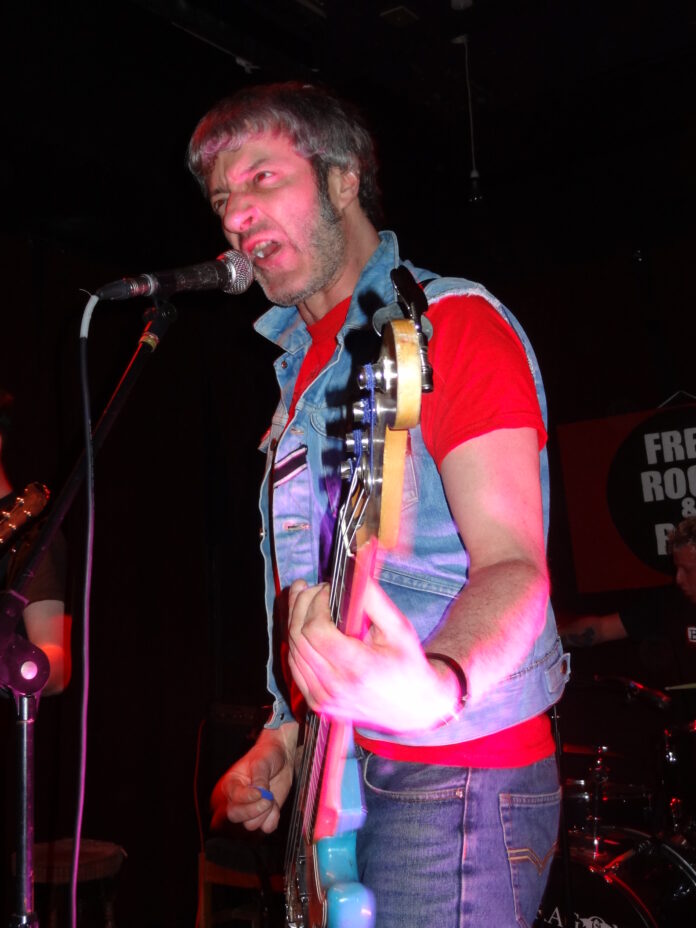 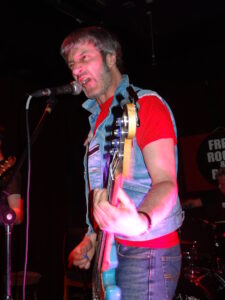 I knew nothing about The Jackhammers other than they had previously played with and have been confirmed as the support band for the forthcoming Atomic Suplex European tour…based on the theory that any band that can go out with the Suplex noise fest can’t be bad I headed to Mello Mello, Liverpool on a particularly grim Thursday evening; on route I did some ‘research’ and found that their debut release was entitled ‘The Flaccid Cripple Sessions’ came wrapped in a sleeve featuring a cross dressing Batman and contained such gems as ‘Bags Of Dogshit’ and ‘Everybody’s Cockpuppet’ – seemed to appeal to many though as the place was packed; so as this Glaswegian 3pc took to the stage there was warmly receptive crowd…

This whole thing is clearly a piss take, a clever tongued wedged firmly in cheek ruse, frontman and bass player Jim Shit looks to have been moulded out of plasticine, his creator following a sketch of Sid Snot handed down from Kenny Everett; battered DM’s, shapeless, brand less blue jeans, an equally shapeless cut-off denim jacket, all topped off with a haircut that…well, isn’t – however the Flesh Eaters T-shirt partially concealed by said cut-off suggested that this band may well know their stuff, stage left wielding the guitar…one Horace Cockpuppet Esq who until the point he removed his specs looked like a certain well known wizard after a heavy diet of lager and kebabs.

JS mutters into the mic in an accent as broad as the Clyde itself; Liverpool is a city with its own distinct accent but this was beyond us being closer to Captain Caveman than a walking talking person, none of it mattered as seconds later the onslaught began; as the name suggests there is absolutely nothing subtle about The Jackhammers, Jim sprays a gob full of lager into the air and its wave upon wave of 2min garage style punk – not garage punk, for somehow The Jackhammers have managed to take the punk sound of The Ramones, the garage sound of The Sonics and smash the two together, not blended but simply collided the genres and then regurgitated at red line speed, Horace is throwing guitar poses similar to those I guess constitute a Motley Crüe audition, whilst JS offers up every clichéd rock n’ roll posture between further guttural vocal rages; 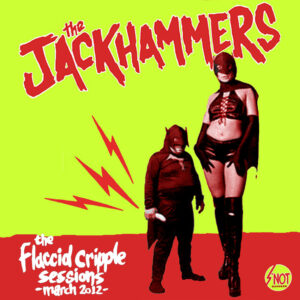 It’s the sort of moronic cretin punk attitude practiced by The Macc Lads, and frankly it was utterly brilliant – lightning hot, similar to being caressed by a claw hammer;

I bought their EP ‘Give ‘Em Enough Dope’ – I’m guessing they played tracks from it, we could have heard ‘Used Rubber’, ‘Dead Braincells’ or even ‘The World’s My Toilet’ and ‘Gas Chamber U2’, we did however hear a cover of Devo’s ‘Mongoloid’ – a further clue that these boys know their eggs and are well aware of what they are up to; I saw Devo ‘back in the day’ and this genuinely was one of the finest versions I have ever heard, and let’s not forget The Jackhammers are a basic guitar, bass and drum set up…Jim Shit making the most of the theme as he delivers the lyric face contorted into that of a drooling sufferer; it’s definitely not politically correct but when your surname is Shit is anything ever going to be.

Moronic, stupid, vacuous, puerile, childish, inane…rapidly running out of adjectives here – The Jackhammers are all of these, they know it and they love it, go see ’em and you will love ’em too.