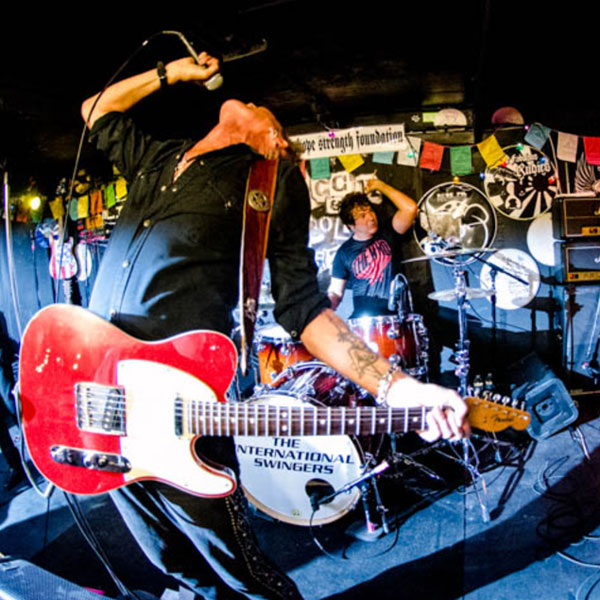 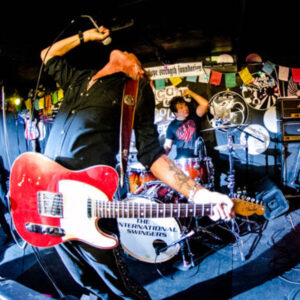 I’ve said it before, but James Stevenson has never made a duff record. Chelsea, a band I truly detest, were at their best when Stevenson was at Gene October’s side and all of their good material was made with Stevenson in the band. His recent solo album “The Shape Of Things To Come” showed that he’s not merely the sideman de jour that he’s portrayed as. He’s been in Gen X, Kim Wilde’s band, The Cult, Matlock’s Philistines, The Alarm and pretty much every decent punk record ever. Slight exaggeration but youknowwhaddamean….

The International Swingers is a project that has Stevenson collaborating with Clem Burke of Blondie (and The Smart Squad- see my earlier review), Glen Matlock out of The Pistols and Gary Twinn, formerly of the great but unheralded Twenty Flight Rockers and more recently Speedtwinn.

“Supergroups” are, in reality, rarely that- people tend to go along out of curiosity or to see the encores of the songs from the more famous parent band. To be fair, The International Swingers are not averse to a version of GSTQ or “Dancing With Myself”, but hell, why not.

This album, however,is one that definitely bucks the trend. The songs are, for the most part, vivacious, energetic and well-crafted. Opener “FBI” grabs the listener by the short and curlies from the off. With a spiralling, descending glam riff at its core, it’s got good times written large across its grinning chops. Stevenson and Gwinn trade licks like their having the time of their life. It’s nothing too complex, but the best rock and roll songs aren’t. “I’ve got an AK47 and an extra clip, gonna dance till I die, surrounded by the FBI” sings Gwinn with an almost palpable grin slapped across his face.

“Gun Control” has a title swiped from (amongst other things) a Pistols bootleg but it actually begins a little like The Professionals before settling into a chopping blaze not unlike Paul Simonon’s post-Clash band, Havana 3AM. The subject matter is about school shootings and the prevalence of firearms in the USA and actually ends with a neat little vocal nod to “Guns On The Roof” by Strummer et al.

“Fool’s Holiday” brings the punky psychedelia and dark rock that Stevenson often plays in (one of his many) day jobs as second guitar in The Cult. The playing is controlled and the songwriting is restrained and elegant but is kept in the upper reaches by Burke’s typically Moon-esque drumming.

“Sweet, Sweet Love” wouldn’t sound out of place in some remake of “American Graffiti”; it’s charming and summery and Stevenson manages to shoehorn a signature punky solo into the brightly lit verses. The chorus has something of a similarity to The Vibrators “Sweet, Sweet Heart” but I’ll let them off with that one. “Honey’s Room” has a psych-y feel again but the hooks and choruses are as memorable as anything Burke’s more famous band produced. Matlock’s slithery, thumping playing recalls his Small Faces/Faces influences and he does what he does as well as ever.

“Live Wire” sees Stevenson and Gwinn’s guitars chime along in a style not unlike late-period Gen X and the honeyed chorus is a true mind-worm. The album really does put to bed the old myth of bands and the sum of their parts. These guys could have thrown out any old thing given their respective histories. To their credit, “International Swingers” is an album that stands up with anything thus far released by anyone this year.