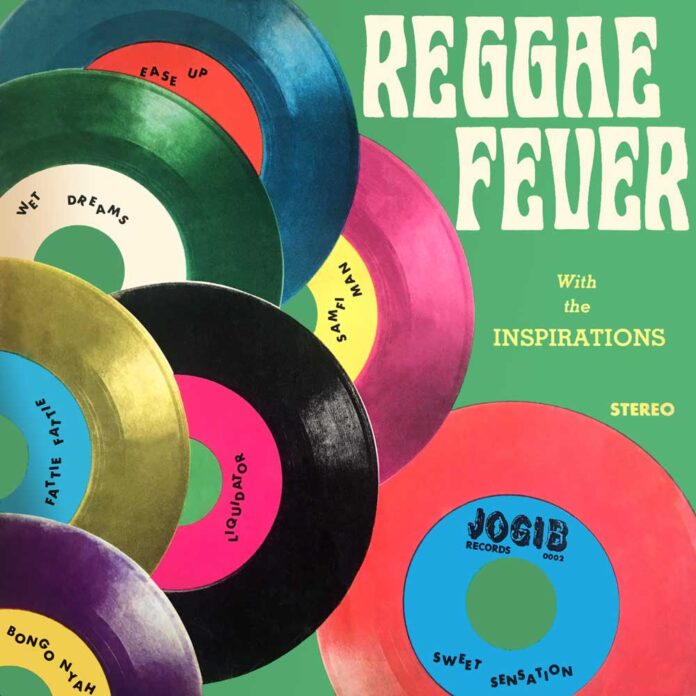 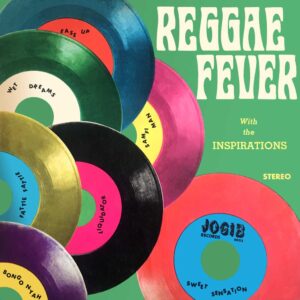 Reissue of reggae vocal duo The Inspirations’ 1970 album, which forms the basis for a 2CD set of Niney The Observer’s productions from when he was part of Joe Gibbs’ Amalgamated set up. The LP itself comprised mainly of cover versions of skinhead/boss reggae hits. Among the bonus tracks are six other cuts from The Inspirations, along with 37 other tunes by performers such as Stranger Cole, The Soul Sisters and The Reggae Boys. Ian Canty thinks he is going down with a temperature…

By the time of the Reggae Fever album, Joe Gibbs had fallen out with his star producer Lee Perry over money issues. Perry had been behind many of Gibbs’ biggest hits and it is fair to say he left somewhat of a large hole in Joe’s Amalgamated organisation. In filling the sizeable gap left by Perry’s departure Gibbs struck lucky with George Boswell, a youngster from Monetgo Bay who already had gained some experience in Kingston music circles. Also known as Winston Holness, he had a lost a thumb in an accident at work and this unfortunate event gave him the sobriquet Niney. The nickname stuck and over the years he became known to the rest of the world solely by it.

The Inspirations were a duo made up of Trevor Shaw, who is better known under his stage name Jimmy London and Rainford White aka Billy Dyce. After a unsuccessful debut single, the pair struck gold with stone cold reggae classic Tighten Up, recorded with the aforementioned Scratch. They then moved to Amalgamated Records and recorded a couple of tunes that appeared to criticise their former mentor, which suited Gibbs down to the ground. These were successful, so The Inspirations were given the opportunity to record their first album.

In truth the Reggae Fever album itself is fairly enjoyable, but the run through of familiar hits doesn’t do anything extraordinary. Some of the tracks don’t feature The Inspirations at all, which is a bit of a shame as it was their only go at a long playing record, with both members soon opting for solo careers (for a review of Jimmy London’s Bridge Over Troubled Waters LP click here). Reggae Fever begins with a decent instrumental cut of Moon Walk retitled Mad Rooster by Lloyd Willis & The Destroyers aka The Hippy Boys, who featured in their number Glen Adams, Alva Lewis and Aston “Family Man” Barrett. The Inspirations pull off a bright take of The Bleechers’ Ease Up and a smart original in the coolly voiced Why Do You Laugh At My Calamities?.

For some unknown reason Ken Parker’s sweetly sung Only Yesterday crops up on the LP, but it is a sunny, and bouncy pop reggae nugget though. It is mystifying how it ended up on an album by The Inspirations. Bunging on a few instrumentals to beef up a LP may have been a common practice on Kingston’s music scene at the time, but not so much using other people’s songs. The title track is a nicely paced organ and guitar instro and The Inspirations’ energetic version of Earl Lowe’s Bongo Nyah cuts the mustard. Dyce and London perform all the material well enough. But as they were more than able to turn out their own quality compositions, it is a pity they weren’t allowed to do more of them, rather than just cover familiar hits. Having said that, I did really enjoy their treatment of The Melodians’ Sweet Sensation, which they fit out with some fine melodic vocals.

The album itself is entertaining, if perhaps mostly inessential and a bit of a missed opportunity given the talent involved. But it is the bonus tracks, which highlight Niney’s other work for Joe Gibbs, that really make this set worthwhile. The Inspirations get a chance to let us know how a collection by them might have sounded with their own material on the first six tracks after the LP. The Train Is Coming is a hugely likeable skank and the veiled messages to their former producer Take Back Your Duck and Nothing For Nothing beguile. Though the version of La La (Na Na Hey Hey) isn’t really to my taste, the strong r&b influence on their vocal stylings are beautifully put to use on the very fine lament A Message To My Girl.

The rest of the set takes us away from The Inspirations themselves, though Ken Parker from Reggae Fever scores again with the dance groove of It’s Alright and an expertly sung Sugar Dumplin’. Niney gets a credit himself on The Destroyers’ Danger Zone, cut on Ken’s Only Yesterday rhythm and Stranger Cole’s busy What Mama No Want passes muster too. Junior Byles’ Versatiles are always worth a listen, with Lu Lu Bell being a classy and upbeat slice of the original reggae sound and Long Lone Time a charming nonsense song. It seems likely that The Destroyers’ was another name for The Hippy Boys, who provide the horn-led The Hippys Are Here. Two versions of goodtime early DJ toast number Franco Nero by The Destroyers themselves end this disc.

Disc two of Reggae Fever has mostly quite rare cuts, but a few more well-known items are present. I’ve always loved the rude and crude Wreck A Buddy by The Soul Sisters, so it wasn’t exactly a trial to listen to it again. The song has been released many times over the years, but it is still fantastic, with Nora Dean and the Williams sisters striking just the right risqué note.

The Destroyers/The Hippy Boys also worked under the monikers The Cobbs and The Scientists for Gibbs. They are featured under all these names on many of the tracks on disc two. The Destroyers back Johnny Moore on his fine tribute to Don Drummond, the brassy Reflections On Don B and the Dave Barker-like toast to a Monkey Man rhythm that is their own On The Move is pretty good stuff too. As The Scientists they provide the musical landscape for the keyboard maestro Ansel Collins on a flowing organ instrumental called Professor In Action. They also line up with Ansel as The Cobbs on the moonstomper Hot Buttered Corn and Space Doctor. Added to that, the same band do a space themed instro of their own Apollo 11 under yet another pseudonym The Moon Boys!

To add to the confusion Glen Adams and Alva Lewis of the band also performed vocally as both The Soul Mates and The Reggae Boys for Gibbs. They contribute the marvellous sufferers’ song The Wicked Must Survive and both the fast moving Them A Laugh And Ki Ki and the horns-led Me No Born Ya are simply splendid. The Reggae Boys’ Mama Look Deh was apparently a jib against Gibbs’ former charges The Pioneers and despite the rancour it is a decent stab in the Long Shot style. Reggae Train and Walk By Day And Fly By Night, also credited to The Reggae Boys, are sterling boss reggae tunes too.

Another of their offerings Dolly House On Fire is not bad at all, but it is quite derivative of The Pioneers again. Oddly enough The Slickers may have featured members of The Pioneers here, who as you will have gathered by now had left Gibbs under a cloud. What is certain is that Man Beware, much in a Pioneers mode and credited to Crooks/Agard, is a good enough tune.

The mysterious vocal group The Young Souls give us the infectious poppy reggae of Man A Wail and a lively Why Did You Leave? and Count Matchuki’s DJ cut It Is I is an odd but pleasing mix of jazzy brass and reggae rhythms. The Immortals, who seem to be not the same group as the one that worked with Augustus Pablo in the 1970s, yield a great r&b-voiced reggae number in Bongo Jah and Ernest Wilson, who saw through the ska and rocksteady periods as a member of The Clarendonians, contributes a soulful version of Stax Records’ classic Private Number. Lloyd Willis & The Destroyers Unknown Tongue is a novel spin on the organ instrumental skin stormer and the set ends with another take of The Wicked Must Survive, which as it is ace I am not about to complain.

Soon after the period documented by Reggae Fever, Niney moved on from working with Gibbs and struck out on his own. Blood And Fire, released in 1970, made his name and launched him onto a stellar career as a producer. The roots and dub eras found him as one of the top studio hands in Jamaica, working successfully with big names like Johnny Clarke, Dennis Brown, Junior Delgado and many others. He moved to the US in the 80s, but returned to Kingston later to work with Frankie Paul and Junior Byles. His Observer Soundbox studio was opened in the city eight years ago.

Reggae Fever does a steady job of bringing together Niney’s work for Joe Gibbs in one place. As such, it presents a masterclass in thoroughly danceable and memorable original reggae. The Inspirations’ album it is based around is a bit strangely constructed if listenable, but on the whole this is a consistently satisfying 2CD collection, boasting some absolute gems. Everything here has been made with real quality at its heart. Skinhead/Boss reggae or whatever you want to call it, was at its height whilst Niney was with Gibbs and his magic touch is brought to bear on every item featured on Reggae Fever.