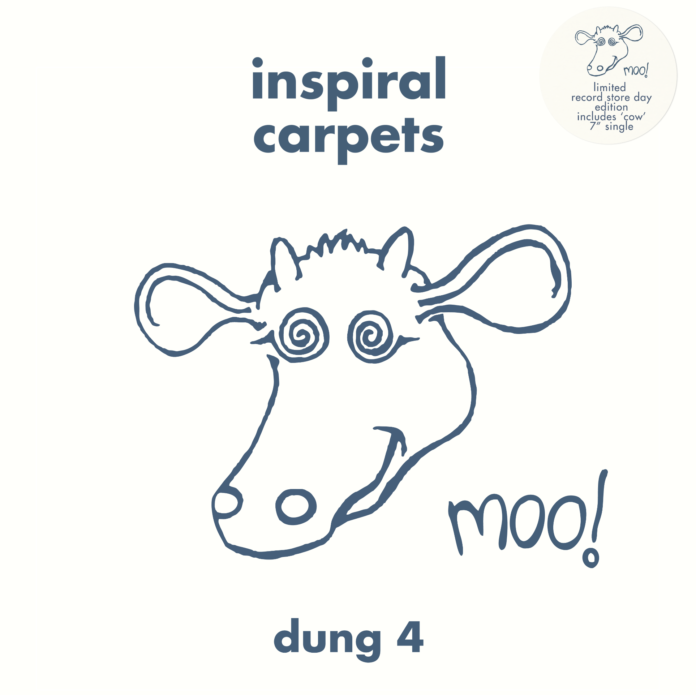 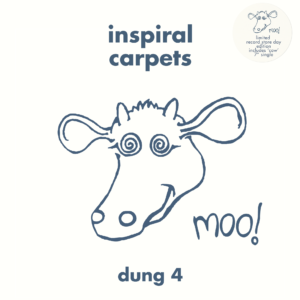 The Inspiral Carpets recently announced they had signed to Cherry Red Records, with a new album and a reissue both planned for 2014. The first of these releases, Dung 4, comes out at the end of April.

Ever since the return of original singer Stephen Holt in 2011, The Inspirals have been keeping busy with tours in the UK and abroad, as well as releasing two great new singles – ‘You’re So Good For Me’ in 2012 on their own Cow label and ‘Fix Your Smile’ in 2013 on Tim Burgess’s O Genesis imprint.

The band’s new album, which will be entitled simply ‘Inspiral Carpets’ is tentatively scheduled for September 2014.

As a precursor to this, Cherry Red will be reissuing the Inspirals’ legendary demo tape, ‘Dung 4’, for the first time on vinyl and CD. The vinyl version will be a limited edition available for Record Store Day on 19 April. It will contain all eleven original tracks, re-mastered from the original master tapes, with a bonus 7” EP of the band’s earlier four-track Cow demo from May 1987. All tracks will also appear on the CD edition, released 28 April.

Although the session was recorded in December 1987, what became known as Dung 4 wasn’t issued until May 1989, and only on cassette, the same month as the band’s third single ‘Joe’, in a bid to combat the bootleggers and as a thank you to their fans. The cassette included the original demo version of ‘Joe’, featuring Stephen Holt on vocals, which had previously graced the compilation LP ‘Manchester, North of England’.

“After years of playing local gigs and recording several demo tapes, which gradually improved each time, we seemed to be on the rise in Manchester and our name also seemed to be spreading around the country. We recorded Dung 4 when we had built a strong batch of tunes and had perfected our own sound, different to anything else in Manchester at the time. It felt like we were recording our debut album and something special.”

“We recorded and mixed the Dung 4 session at my little studio in the Guide Mill on South Street, Ashton Under Lyne. It cost nothing to make. We all had jobs at the time. This is what we did after work. We were a garage band. I knew this recording session was a very important moment for the band. To me, Dung 4 is our debut album. Listening to the original master tapes for the first time in 27 years was the most goosebump-inducing moment I’ve had in my time with the Inspirals.”