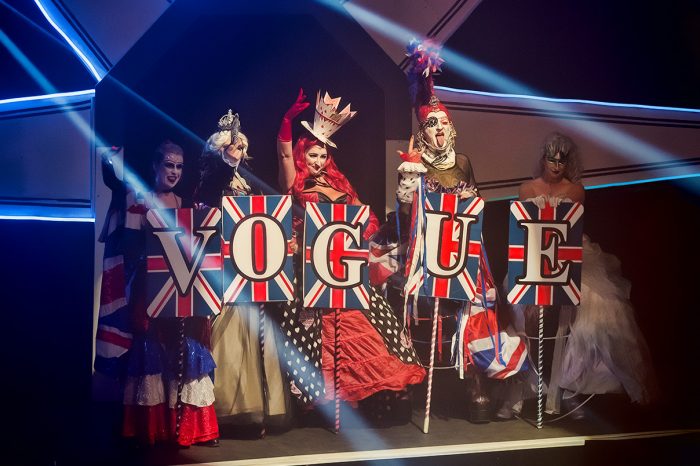 Set loose at The Iconic Ball, Roxy Gillespie (words) and Melanie Smith (photos) drank in the excitement and atmosphere. Here is the result of their latest experience of vogue in Liverpool, representing the dancers and audience that love it so well.

The Iconic Ball marks the eighth vogue ball in Liverpool and the tenth anniversary of The House of Suarez. This is one of the most exciting events on the dance calendar and is a hugely popular event. Held for the first time in The Invisible Wind Factory, the change of venue had little effect on the popularity of the event.

The night began with a short speech from Darren Suarez, artistic director of The House of Suarez. He thanked everyone for joining the tenth anniversary celebrations. He gave a special mention to the sponsors of the evening who included AYAW?, Urban Calm, Morecrofts Solicitors, Rare Atelier. Sane Seven Photography Production, Good News Liverpool, The Lisbon, MDI and The Kazimier also helped. Arts Council England were also instrumental in supporting The Iconic Ball. 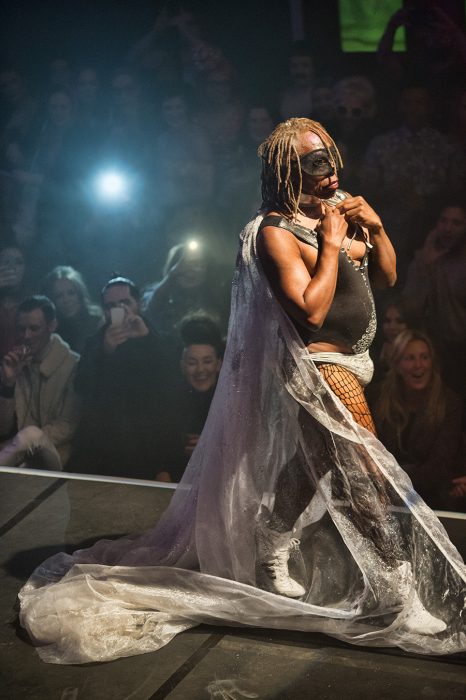 Darren Suarez then introduced a piece which was a fusion of vogue and contemporary dance including influences from ten years of The House of Suarez. It began with a screen and the silhouette of dancers moving behind it which was dramatic and effective. Then the dancer, Ryan Harrison, came out from behind the screen. He was silver from head to toe. It was like watching a statuette from The Oscars come to life. His routine was followed by more exotically-clad house members; a dancer in silver shorts and nipple tassels topped by a diamanté jewelled motorcycle helmet and a dancer with high black boots and an extravagant cape. Then there was a piece by a man and woman dressed in ancient Egyptian- style costumes. The piece finished with a group of black clad dancers with diamanté decorated caps sending the crowd wild with their snappy routine.

Regular host Rikki Beadle-Blair cranked up the excitement levels before The Iconic Ball competition began. Strutting down the cat walk in a stunning outfit designed for him by The Rare School of Fashion, he enjoyed a rapturous reception. Speaking of icons lost in 2016, he paid tribute in dance to both Prince and Bowie. As usual, his exuberant stage persona brought the audience to fever pitch. Recently awarded an MBE, the gay rights activist, actor, director and musician, has a stunning rapport with the audience. He explained the origins of the Vogue movement and invited us all to be gay, black teenagers for the night, to deafening applause.

Then it was the turn of the judges to show their skills. New for 2016, the judges came out to strut and dance their way along the catwalk. Dean Murphy, stalwart of the 1980s Vogue scene, Aviance Milan of New York and The Vivienne, who is RuPaul’s Drag Race Ambassador in the UK showed their interpretation of the Iconic theme before taking their places on the judge’s panel. There were 13 Houses competing in the 2016 competition. Included in the line up were The House of Suarez, House of Cards, House of LIPA, House of W, House of Horrors. Also competing were House of Decay, House of Lisbon, House of Rare, House of Bittersweet, House of Masquerade, House of Iconic, House of Ghetto and House of Twisted Stitches.

The outfits in the fantasy category were outlandish, outrageous and exuberant. They included an outfit covered in the planets of the solar system worn by Grace Manley; zombies and a dark angel. A group had various ‘Keep Calm’ logos on one side of cards, turned them round to show ‘VOGUE’ spelled out on a union jack background. The House of Decay won this category.

The solo dancers are always a delight and the 2016 standard was exceptionally high. They included Kaan Huzarski, dressed as Wednesday Adams, who was amazing, also dancing as a male bride. A white boiler suited dancer and the silver icon from the House of Suarez opening dance also thrilled the crowd. The category ended in a dance off between four dancers, with silver-clad Ryan Harrison taking the well deserved award.

The night continued with more extravagant costumes and stellar dance displays. The next category saw Ken throwing over Barbie for Action Man and ‘Madonna’ with two scantily clad men in attendance. The Joker also put in an appearance, spraying the audience with silly string. A Jesus figure was whipped by a Roman guard, both from House of Cards. A peirrot figure styled around Bowie’s Ashes to Ashes phase brought another Icon to the stage.

In the Sex Siren category homage was paid to the stars of music and screen. A dancer with a live snake draped seductively round her neck had the wow factor. Madonna, Pharaohs and even Freddy from ‘A Nightmare on Elm Street’ all hit the catwalk. Jessica Rabbit also graced the catwalk, brought to life by Ida Jorgensen. Renae Hughes made a wonderful white angel. With some samba-based moves from ‘Carmen Miranda’, Viva Brazil’s Simone Reeves, taking the prize, the night moved towards the finale, with the group choreography section won by The House of LIPA, the best of the amazingly well planned and executed routines of the night.

All that was left was to announce the overall winner of the competition. It must have been a difficult choice, but the judges chose the House of Cards as the champions. With another successful event over, it was time for the audience to take the opportunity to show their moves on the catwalk. The crowd were left to dance the remainder of the evening away.

It is easy to see why The Iconic Ball played a big part in the 2016 Liverpool dance calendar. Rikki Beadle-Blair ranks it as his favourite event of the year. The atmosphere and support the audience gives to the talented dancers and designers is almost worth an award itself. Roll on 2017.

Please note: Use of these images in any form without permission is illegal, please contact mel@mudkissphotography.co.uk

Find out more about the House of Suarez at the website here.

All words by Roxy Gillespie. More writing on Louder Than War can be found at her author’s archive. She Tweets as @RoxyG100. Her blog is found at https://mixingfrequenciesonline.com/

Photos by Melanie Smith. More work by Mel on Louder Than War can be found at her author’s archive. You can find her on FacebookandTwitter. Photography portfolio can be found here and Flickr