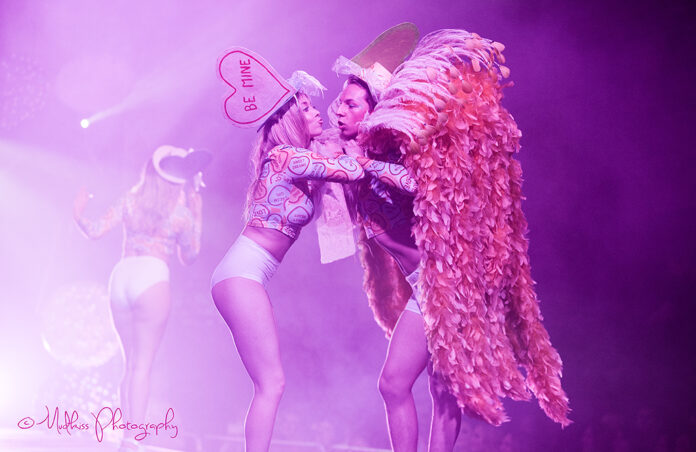 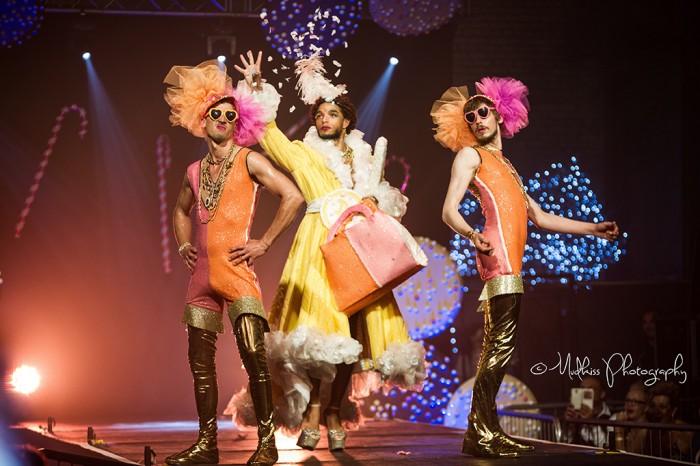 The House of Suarez Sugar Ball

Two Louder Than War rock chicks sample the LGBT exuberance of a stellar night on the town. Reviewer Roxy Gillespie, and photographer Melanie Smith reporting in words and photos below.

This may not be Harlem, New York and it most definitely isn’t the 1960s, but the audience at the House of Suarez Vogue Ball 2015 in Liverpool didn’t seem to know or care. Everyone had dressed up in their own way, but one thing was certain – no matter how much effort they had made, they were never going to upstage the performers. The courtesy staff were dressed like air hostesses and seemed similarly helpful, showing us the way to the main room to take our place for the performance. The theme was ‘Sugar’ and the backdrop of the stage looked mouth-watering, with mocked-up sweets and candy cane decoration, ready for the performances to come. 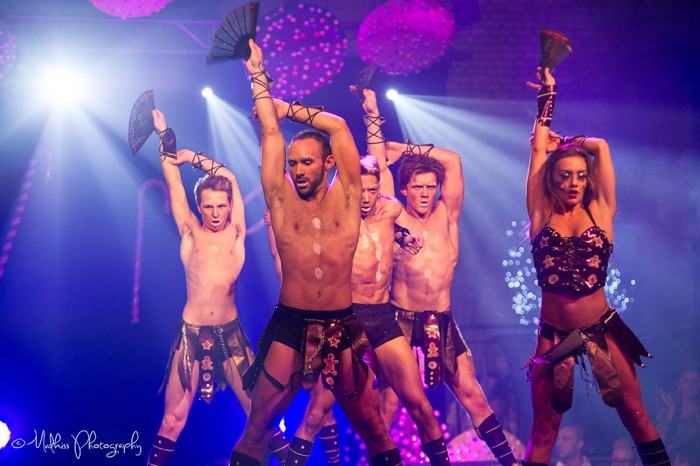 When the judges, Gary Millar (Councillor and Ex Lord Mayor), The Vivienne (RuPaul’s UK Drag Race Ambassador) and Benjamin Milan (Swedish Voguer from The House of Milan) were ready, the event began  and Rickki Beadle-Blair, the excellent compare, strutted onto the stage. If you don’t have any idea about voguing, as I didn’t, things can seem a little baffling at first. Rickki, asked us all to become gay and black for the night. As the evening progresses, he explained the origins of the Vogue movement which originated in the dirt-poor areas of Harlem in the 1960s among young gay people looking for acceptance and a way to express themselves through dance. Often disowned by their families, they formed into ‘Houses’. Being a ‘child’ of a house gave more than just somewhere to perform, but gave them support, a sense of identity and a ‘family’ they didn’t have in the traditional sense. Often the bond was so strong, the ‘child’ would legally change their last name to that of their house. This can be seen here today, with the organiser of the Sugar Ball, Darren Suarez (Artistic Director at The House of Suarez), carrying on the tradition. 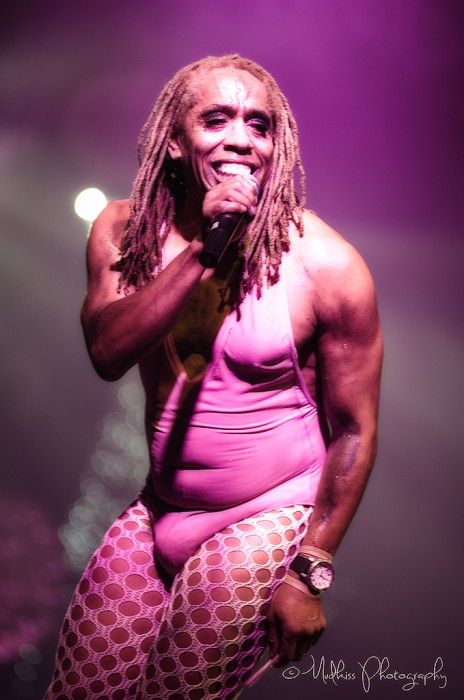 Rickki, Continued to make sure everyone was in the party spirit. Wearing a succession of risqué and outrageous outfits, he never let the crowd get complacent. First we were treated to an extravagant set dance piece choreographed by Darren Suarez himself. Featuring a gallery of grotesques including a pantomime dame-type figure in a huge ball gown and her progeny, the piece called ‘The 1st Hunt-y’ ended with two hapless men trapped in the cage-like underskirt of the mothers gown. It was a fabulous way to begin the night.

The Fantasy Category had an amazing array of outfits showing just how much effort the Houses had put into preparing for the event. The brilliant pictures by Melanie Smith show this breath-taking spectacle far better than I can describe it, but I can say it was incredibly entertaining, with the audience sometimes being bombarded with sweets, as the performers stayed true to the evening’s theme. Eventually, after a lot of deliberation by the judges, the prize for the Fantasy Category went to The House of LIPA. Then came the solo category with some amazing dancing. The performers showed innovation and originality that wowed the audience. The judges needed to ask for dance-offs from the performers, as the talent on show was so hard to chose from. The winner ended up as The House of Shoqlat, who had travelled from the Netherlands to compete. The night continued with the Realness Category, with more stellar performances and another win for The House of LIPA, before a break for everyone to recover and for the stage to be cleaned of all the sugary substances before the battles re-commenced. 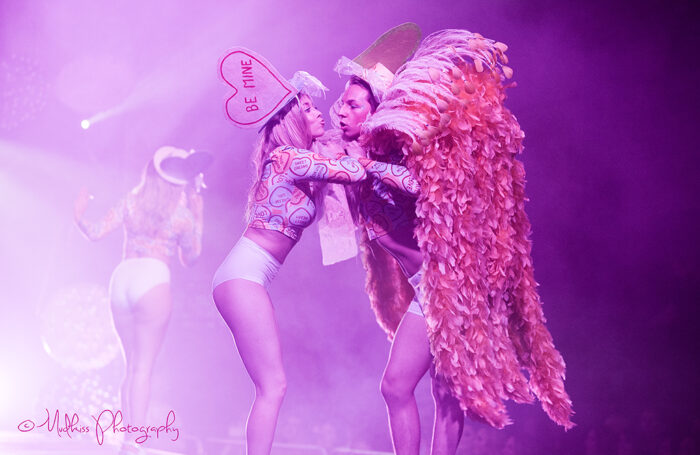 The Sex Siren Category showed some raunchy and close-to-the bone pieces that had the crowd roaring for more. Ending in a dance-off, the evening was really getting going. Eventually, the category prize again went to The House of LIPA. The pace never faltered with the Choreography Category showed what the Houses could bring to the catwalk en-mass, with brilliant, dramatic dance sequences showing the House performers and artistic arrangers at their best. The level of professionalism was at times awe-inspiring. Won by the House of Cards, it must have been a difficult choice for the judges to make. 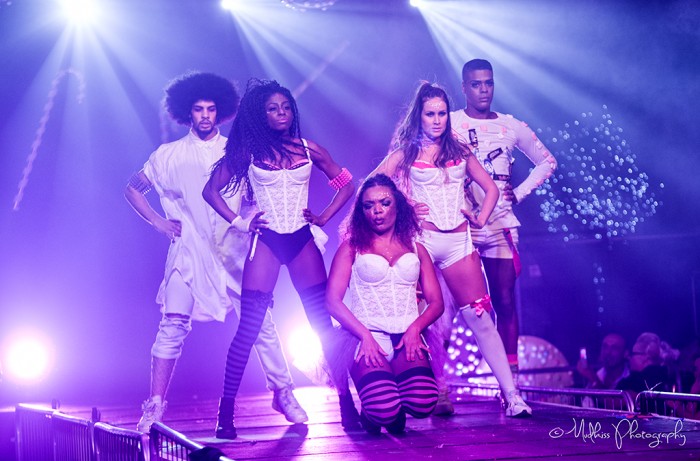 Then it was time for the judges to name the overall winner of the competition. Choosing House of Shoqlat, one of the smaller houses at the Ball, for their incredible performances and their adherence to the original spirit of Vogue, the judge’s job was over. We were treated to some more remarkable moves by the Shoqlat performers; a fitting end to a brilliant competition. All that was left was seeing the organiser, Darren Suarez, and another dancer, also called Darren entertain us with some of their own Voguing. The 2015 House of Suarez Sugar Ball was a night I won’t forget in a long while. Darren Suarez should be very proud of arranging such a prestigious and enjoyable event. If you’re in the Manchester area and want some high class entertainment, The House of Suarez are holding a Mini-Ball at Gorilla March 2016.

Check out the photo gallery:

More information about The House of Suarez can be found on the following links: