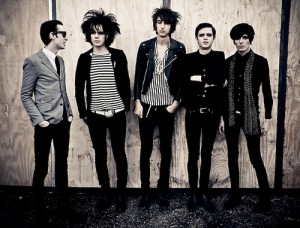 Record sales being what they are in an era of limitless streaming and illegal downloads, it isn’t enough to merely release an album anymore, you have to launch it. Tonight sees The Horrors’ third gig this week happening for this purpose, at the miraculously still standing 100 Club.

It may have taken nine years’ musical evolution and repeated image shedding, but in 2014 few bands are quite as universally respected as Southend’s finest export, Rachel Riley notwithstanding. This appears to be the case for two main reasons. Firstly, they’ll play anywhere they see fit, big or small. Luminous (see Louder Than War  review here) having predictably received wall to wall praise, they could have just booked and sold out Brixton Academy once more and had done with all this launch nonsense. But instead, they’re here, in the sultry surrounds of one of London’s oldest, smallest, stuffiest gig venues. A single fart could kill someone.

Second, they don’t waste a single groove of vinyl, spin of CD or byte of MP3. Every album since debut Strange House has seen a formidable reinvention of past sonic ventures, be it those of themselves or other artists.

Luminous continues this evolution with remarkable ease, incorporating more flagrantly than ever the band’s love of electronic music (explicitly demonstrated last month by their excellent live cover of Frankie Knuckles’ Your Love on Radio 1).

This manifests itself onstage as a small army of synthesisers under the command of Tom Furse, beginning to resemble a sort of Brian Eno of his generation. As much as I feel for the roadies lugging such a mass of equipment from gig to gig, their efforts translate into a large part of what makes The Horrors’ live experience so spellbinding. I See You sees Furse build layer upon layer of euphoric melodies, over an outro that lasts at least twice as long as it does on record, before everything comes to a sudden halt – all five members stopping in perfect unison as if it’s already so routine for them. In a police line-up of songs played tonight, you’d be hard pressed to pick out the new ones based solely on performance.

That’s not to say the set is entirely without hiccups. Opener Sea Within A Sea gets off to a false start owing to an apparent bass pedal glitch, while a first attempt at Endless Blue sees the band out of sync with each other before swiftly starting over. As jarring and unlike them as it is, they seem happy enough shrugging it off, and so do the crowd. It’s as if everyone’s among friends.

Ten songs down and we come to Skying album track Moving Further Away, a typical Horrors set closer with its ample room for noisy, sprawling digression. Frontman Faris Badwan once again pulls his makeshift theremin trick, angling his microphone into guitarist Josh Hayward’s amplifier and creating a blitz of swirling feedback in doing so. Deafening at Y Not Festival last year, deafening again here, but with an added sense of danger as the opposite end of his mic-stand nearly gives a facial battering to those in the front row.

At the end of it all as they battle through a crowd twice as sweaty as they are to their dressing room, it seems fair to say that whatever the intended purpose of an album launch show, to The Horrors it’s just another chance to mark their territory as one of the UK’s best acts gigging today.