The Horrors photos by Mike Burnell

it may be bright sunshine and the bizarre site of clouds of dust and overhead sprinklers spraying the crowd to cool them down- sites unknown to UK festival heads but we still need a dark cloud to make things feel right.

The call goes out…bring on the black!, we need a walk on the dark side and it’s answered by the Horrors who make a dusty day at a festival in Hungary take on an a brooding and powerful atmosphere of its own.
I’ve seen Horrors many times over the last few years.

I was there for their inception as garage punk ghouls with a neat line in abbreviated, stub toed, garage rock which saw them play their sawn off anthems to lowlife with a snotty hipster cool. These gigs would be in front of the cutest looking audience of polka dot shirt wearing, teased haired micro goth kids, hipsters that looked so perfect that resembled tiny dolls taken out of the packet.

The Horrors were magnificent then. they got an NME front cover that an explosion of back combed hair that horrified the staid indie nation. It was a modern version of the New York Dolls moment from the Old Grey Whistle Test in 1973 when a glammed up bunch of droogs shocked the librarian mentality of the proper music brigade.

Their debut album of ninety second long garage goth psychosis was one of my favourite albums of that year but was also that kind of music that only people like your author and a handful of sharp and angular music fiends will ever listen to. 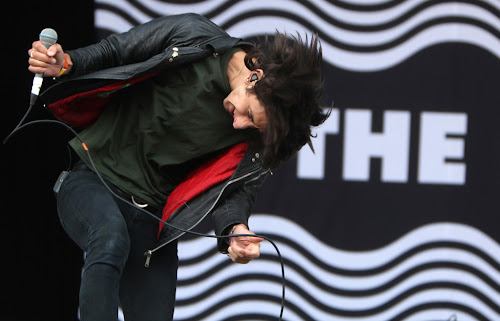 Where do you go after recording one of album the holy stuff? You could do it all again or you could shoot off at an entirely unexpected tangent. Which is what the Horrors did. They did the smart thing when they suddenly switched sound on their second album, Primary Colours which was a leap into the unknown with even darker, more somber songs that utilized drones, Krautrock, My Bloody Valentine guitartronics with a neo trance dark uber indie feel. It was an award winning masterpiece and set the band Ina totally different trajectory.

Re-emerging in that blur of tripped out guitars and drone songs the band, who had previously been sniffed at for being NME pin ups on account of their great hair suddenly found themselves critically acclaimed. The rare thing was that they actually pulled this off and retained their innate darkness which they further explored with their third album Skying and have been pepper sprayed with deserved plaudits and awards.
Today they are mid bill on a hot afternoon in the middle of a hot dusty field in Hungary. In this environment they should be falling flat on their pale faces but somehow the band have cranked their sound and made their intimate songs into stadium fillers without losing any of the nuances or atmospheres and sound enormous- in many ways even better than those dank and genius albums. Today they sound like some kind of big, dark keyboard driven behemoth with a musical muscle pumped way beyond what they were before .

This is a truly special show from a band that is at the peak of its powers. I’m transfixed by their power and their presence. A daylight slot should kill a band like this but they seem entranced and the sound is perfect and the enveloping walls of sound pour out.

The Horrors, who were once dismissed as some kind of haircut hype band by those angry keyboard warriors with their fingertips of disgust who get nervous about bands like these, have entered the festival mainstream as welcome break from indie dullards that can hog these big stages.

Somehow, they have turned themselves into a serious business rock machine, a rock machine that deals in the dark arts and creates an atmosphere of its own .

A unique and powerful experience, the Horrors were stunning at Sziged Festival and are primed to take their next big leap.

The songs are hypnotic, built around the sometimes one note droning bass played by Rhys Webb who, like all the band band has dropped his great former monicker of Spider Webb for his real name. Webb is the master of the bass drone, making the sometimes one note spine intense and powerful and does the studied, pouting cool thing perfectly as he locks in with the tight rhythm section like the best of Krautrock.

The rhythm section creates the perfect platform for Joshua Heywood’s guitar to either make sounds layers or freak storms of guitar filth with an explosion of notes whilst. The weird sounds he coaxes from his guitar are mind glowingly original and help create theater worldly sound of the band- shut your eyes and you can picture some kind of Tim Burton film going on.

Tm Cowan, looking icily cool as ever in snappy grey Prince Of Wales grey check jacket and shades utilizes the keyboards as they build levels of sound with either washes, or strange noises with an arsenal of effects and ideas. Cowan is actually live mixing his own keyboards and adding his own dub effects whist he plays which is thrillingly effective adding to the bands spooky psych feel.

The drums have those tight echoes on them like Martin Hannett used to specialize in for Joy Division and the band are definitely woking in the same kid of atmospheres as the Mancunian band from decades ago did. This is a dark and serious music, the kind of stuff that should not work at a sunny day festival main stage but is totally mesmerising in the right hands and transcends the daylight and creates its own swirling atmosphere.

Vocalist Faris Badwan has really got this frontman thing nailed now. His Joey Ramone skinny tall personae Is part of the band’s arsenal and his voce is a deep dark, serious croon and he works with the bands sound, adding his vocals like an instrument.

The set is culled from the last two albums. There are no upgrades of their original work, which is shame as you get the feeling the band have disowned the garageband shuffle that got them onto the stage n the first place. But the second phase sound is a powerful machine, a dark trip and today makes them the best band of the event.

The Horrors have never sounded better and they have turned their left field explorations into the kind of music the can dominate there’s big stages, a track that also pulled off by The Cure years ago proving that dark and experimental can still make for great pop music.

Where they go next is intriguing…