Home Music Reviews Album Reviews The Honeycombs: Have I The Right? – album review 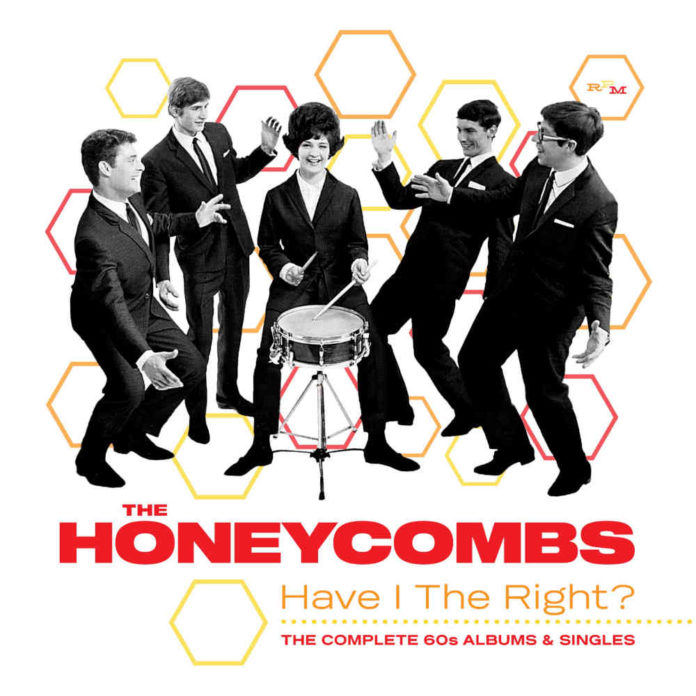 The Honeycombs: Have I The Right?

This 3CD boxset subtitled “The Complete 60s Albums And Singles” includes everything recorded by the band under the auspices of Joe Meek. Ian Canty sees how the Honeycombs offered the maverick producer new hope in the mid-60s.

When the Honeycombs topped the UK charts with their debut single Have I The Right? in the middle of 1964, Joe Meek must have felt vindicated, gleeful at being able to have shrug off the yesterday’s man tag that had haunted him since beat groups took over. Having been dismissive of the Beatles themselves (he famously was quoted as saying something along the lines of “They’re just another bunch of noise, copying other people’s music”), he could only watch as they conquered the world and made the likes of the Tornados and the rest of his roster seem staid by comparison. The whole beat scene mushroomed, a very different beast to the UK post-rock & roll scene Meek had prospered in. But now he was back…

The Honeycombs, a London-based beat group formed the year before as the Sheratons, taped Have I The Right with Meek, having tried to place it with several labels unsuccessfully. Perhaps his abrasive personality combined with past dealings may have been behind the reasons that labels passed on it, but eventually Pye decided to play ball and a massive hit was the result. The record proved that Meek could cut it in the beat era. It was as bracing a depiction of teenage urge and frustration had been set down on vinyl at the time, with a hint of the relentless glam stomp in the driving rhythm, something that was still some way off. Whilst the band would crucially remain without an in-built song-writing team for the time being as the Stones and others succeeded by recording outside material, all looked rosy.

Going back to their roots, drummer Honey Lantree was the last to join the band, deciding on percussion after briefly considering the guitar. She made up the rhythm section alongside brother John, with guitarists Martin Murray and Alan Ward plus singer Dennis D’Ell completing the line-up. A pub gig in London’s West End interested budding songsmiths Ken Howard and Alan Blaikley, at which point things moved quickly. This pair provided the link to Joe Meek and the song Have I The Right? as the band went from pub dates to the top of the rock & roll scene overnight. Howard and Blaikley cemented their positions at the time of this success by also becoming the band’s managers and well as songwriters.

Though flushed with success the Honeycombs couldn’t follow it up with anything approaching as big a hit, though they did chart with a further three singles. Their lack of a strong image or anyone in the group to provide it through songwriting would soon leave them looking like they belonged to another era among the rapid changes of the mid-1960s, but for the time being their youthful energy and thumping drumbeats would provide some thrills. Their self-titled first album, which makes up a large part of disc one of this set, at its best is brash, knockabout fun.

Meek’s odd sound signatures and habit of speeding up the master only occasionally jar, and the band bring a punky brio to proceedings. He does curious things with D’Ell’s voice when it goes deep – the only thing I can compare it to is it’s a bit like Betty Marsden playing a Russian spy in Round The Horne. Colour Slide, which begins the LP, is neat beat pop and certainly should have been considered for the follow up single to Have I The Right?, rather than Is It Because?, which actually was the follow up. That song is included as an extra, and while it stomped up a ruckus it also crucially lacked a truly memorable tune.

Going back to the album, the super-basic crunch of How The Mighty Have Fallen is good in a Troggs way, and the punky r&b of Nice While It lasted showed the band possessed the requisite hammer when required. The moody beat cover of Gershwin’s It Ain’t Necessarily So works, and the lighter, folk pop of That’s The Way shows promise. Overall their infectious energy wins out and, although the album bombed, it’s a good beat LP that sounds decidedly different due to Meek. The bonus tracks are fun too, with German versions of the skiffle-sounding Please Don’t Pretend Again and Have I The Right? and a couple of nice radio takes of Colour Slide and That’s The Way. Here, along with the Live In Tokyo LP, we can hear the band without Meek’s trickery and pretty hot they are too.

By the time of second album All Systems Go, things had changed but the Honeycombs hadn’t moved with the times. The record has the sound of an act quickly outmoded and short on any ideas to arrest the slide. The Howard/Blaikley songs are as a whole not quite as good as before and there is no sign of any self-penned material. Having said that, opening track I Can’t Stop is a nice and trebly piece of beat rock (the single version is an extra on disc one), with some heavy treated horns courtesy of Mr Meek and the scratchy and noisy title track is a bit of a treat.

On the less positive side, Totem Pole takes the band back to the day of the Tornados – something that in December 1965 must have sounded hackneyed in the extreme. Apart from a good vocal performance on Something I Got To Tell You and the dramatic cover of Ray Davis’ Emptiness, there’s not a lot else to get excited about for the remainder of the record. It is mainly adequately-played beat a few years out of date, with Meek’s well-worn production sound. The bonus tracks on this disc tend to reinforce this, although Who Is Sylvia? manages to impress by sneaking in a faint trippiness under Joe’s nose.

The Honeycombs had quickly become famous in Japan (Love In Tokyo on All Systems Go was an early sign of this success) and as a result recorded the Live In Tokyo LP which shows up on disc three of this new set. The record begins with a brief interview with the band and some acapella, and from then on it is a mixture of material from the two albums and a host of rock/pop covers. Pretty good fun and the band do manage to pull off some garage moves, like on Doug Sahm’s She’s About A Mover and James Brown’s I’ll Go Crazy. They persist with the old-fashion instrumental style on Goldfinger (yes that one), but Honey has a ball on Wipeout, drum soloing all she could. I’m not sure how much this record was overdubbed, but taking it at face value the audience seemed to love them and the band put on a pretty good showing.

There are then a couple of Christmas novelties and a few more of those instrumentals aimed and the Japanese market, before the set ends by taking in Martin Murray and Denny D’Ell’s solo singles. I’m bound to say for Murray’s effort and D’Ell’s first that they got the a and b sides round the wrong way. Martin’s Goodbye My Baby, a fully-formed big pop stormer, was for some reason passed over for the so-so I Know What I Want, and similarly Better Use Your Head has the edge on It Breaks My Heart on Denny’s first 45. His second 7 inch got it right though, A Woman Called Sorrow is far superior than the old hat take of The Night Has A Thousand Eyes.

After this record the group underwent a raft of line up changes and D’Ell, Murray and Ward had left by the time of their final last single That Loving Feeling. Incoming singer Colin Boyd, later known as Colin Hare when fronting Honeybus, wrote this pleasing mid-paced pop sike/folk rock shuffle (a bonus on disc two), but predictably it went nowhere in 1966. Meek’s rapid decline meant the Honeycombs were on a slippery slope themselves and they split up not long after his death in 1967. They reformed in various combinations over the last 20 years on the 60s nostalgia circuit.

The Honeycombs were certainly ground-breaking – Honey Lantree’s efforts behind the drum kit certainly were an early bid for equality on the male dominated music scene and an inspiration too. The band were fun during their time in the spotlight and Have I The Right? is a tune for the ages. It’s true that most bands would have had trouble following it up and the Honeycombs never really did, though they had a few more minor hit singles.

Their first album is consistently enjoyable, the Live In Tokyo LP is a lot of fun and there are bits and pieces scattered among All Systems Go and the bonus tracks that hint at how they could have developed stepping away from Meek, had they had a strong songsmith of their own. It wasn’t to be, but this collection captures that brief moment in time, the teenage angst, flush of hormones and celebration of now that was 60s beat – they certainly had that right.