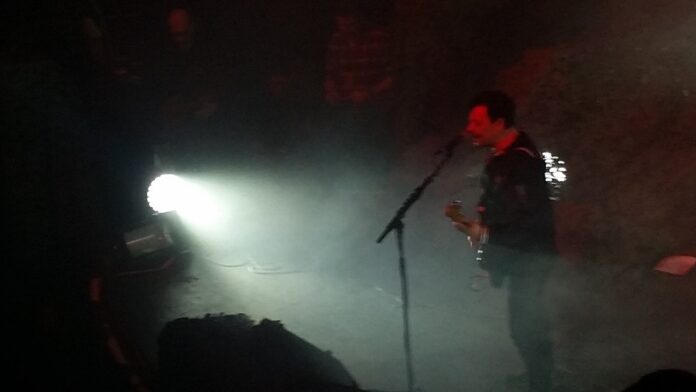 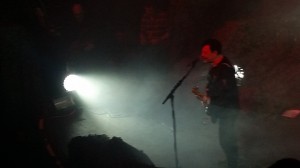 Twenty years on from the release of their seminal album “the Holy Bible” – which would be their last as a four piece – the Manic Street Preachers are touring the classic album in full across the country, with more dates announced for 2015. Louder Than War sent Fergal Kinney to the first of two nights at the Albert Hall in Manchester to witness “the Holy Bible”.

THOUGH the ‘classic album’ concert format has found innumerable takers in recent years, the Manic Street Preachers appear unlikely participants for such blatant nostalgia. Though the 20th anniversary of ‘the Holy Bible’ falls this year – and who really cares about anniversaries? –  few would expect this band to revisit that album. Not only given the obvious emotional baggage of the album, but that this year saw the release of the Manic Street Preachers’ most dynamic and exciting release in over a decade, ‘Futurology’. Tonight, it appears that ‘Futurology’ has more in common with ‘the Holy Bible’ than it would initially appear.

The stage is replete with spilling poppies, bathed in green light, a deliberate and provocative aping of this year’s celebrated Tower of London art installation to commemorate the First World War dead. Indeed, much of tonight has an air of the trenches about it; the band take to the stage donning the mismatched army surplus uniforms associated with ‘the Holy Bible’ era, though one suspects James Dean Bradfield may have had to find a sailor suit in the next size up. Between Bradfield, Nicky Wire and Sean Moore there is an unbroken silence between songs for the bulk of ‘the Holy Bible’ set, the heavy quiet injecting a frisson of tension into the concert that suits the jerky, kinetic energy of the album itself. The solemnity from the band is matched by the surroundings – Manchester’s beautiful and recently re-opened Albert Hall has enough stained glass and crucifixes to make it feel, for tonight, fully part of the visual aesthetic of ‘the Holy Bible’. If there’s a solemn reverence towards the material on the stage, appreciation of a different sort is found in the audience, the opening bars of ‘Yes’ being greeted with an adulation that remains unceasing throughout the length of the set. People are mouthing along to the vocal samples that punctuate the album (the sample from the mother of one of Peter Sutcliffe’s victims that opens ‘Archives of Pain’ is still as terrifying as ever).

Whilst even the glorious dumb punk of “ifwhiteamericatoldthetruthforonedayit’sworldwouldfallapart” doesn’t see Bradfield looking anywhere approaching at ease, it’s understandably why. The hardest task of tonight is on Bradfield’s shoulders – a sheer feat of diction alone as Edward’s words burst the seams of verses, spilling out into other sentences and choruses thrown like hand grenades. Post-punk spikiness morphs into belching power chords as ‘She is Suffering’ broods – indeed, post-punk references pulsate through ‘the Holy Bible’ with a disciplined attention to detail. ‘Of Walking Abortion’ – one of tonight’s real highlights, with it’s incendiary closing refrain “Who’s responsible? You fucking are” – shares much of the same guitar riff as Magazine’s ‘The Light Pours Out of Me’. Later tonight, James Dean Bradfield dedicates ‘Dreaming of a City’ from ‘Futurology’ to Magazine, and it’s clear that ‘the Holy Bible’ and ‘Futurology’ share more than just the final digit on the year of release.

One of the many – and there are many – poignancies tonight is quite how much should have changed in the twenty years since ‘the Holy Bible’. White America still is certainly not telling the truth, though the politics of ‘the Holy Bible’ remain complex. By this point, politics graduate Richey Edwards had dispensed with traditional notions of left and right and increasingly radical libertarianism was shining through his lyrics – no place here for the assumptions of socialism, and it’s been often commented on how fascistic Edwards’ dual fetishes for purity and strength across the album are. In one song, US gun control legislation is pilloried, in another nailing the corpses of rapists to the House of Lords is suggested, whilst ‘PCP’ torches the liberal sacred cow of political correctness. Billy Bragg this is not. Nonetheless, regardless of the extent you agree with Edwards’ sentiments – even Bradfield, Wire and Moore have expressed their strong reservations – the sheer boldness of his lyrics is staggering, the bravery and lack of laziness in his thought impressive. Seething, appalled, bleached in nihilism – despite having wrote not a jot of music for ‘the Holy Bible’, it’s Edwards who is its clear auteur, a constant voice across the voyeuristic character studies of ‘Yes’ and ‘4st 7lb’ as well as the clinical, distant narrator in ‘Faster’.

‘Archives of Pain’, all clipped, jagged verses and furious Nirvana choruses, sounds as tense and sinister as ever; Bradfield delivering with icy precision lines as distant and chilling as “do not be ashamed to slaughter, the centre of humanity is cruelty”. Though the tone from the audience is largely celebratory – impressive frenzies of pogo-ing are ignited by ‘Revol’ (still, baffling) and ‘Faster’ – ‘4st 7lb’ is difficult and caustic, anchored by the sheer darkness of its lyrical content; darker still in the sobering context of what would follow. Nicky Wire performs much of the song with eyes shut. What is striking about ‘4st 7lb’, and indeed central to the endurance of ‘the Holy Bible’, is the ownership Edwards takes over his demons. You’ll find everything but self-pity, even gallows humour – “mother tries to choke me with roast beef/and sits savouring her sole ryvitta/that’s the way you’re built my father said” could be a direct lift from a Mike Leigh film.

It’s in the album’s final three tracks that the colossal weight of ‘the Holy Bible’s intensity really takes hold – the claustrophobic clatter of ‘Die in the Summertime’ is one of the many ‘In Utero’ touchstones on the record, despite having an intro that could have been on any number of Fall albums. Of all the thematic horrors on ‘the Holy Bible’ – anorexia, prostitution, abortion – it’s the two tracks concerned with the Holocaust that retain the most power. Along with ‘Mausoleum’ – it’s ‘no birds’ refrain being one of the highlights of tonight – ‘the Intense Humming of Evil’ is directly influenced by the band’s trip to Dachau and Belsen. ‘The Intense Humming of Evil’ is woozy, jagged and lacerated with disgust at human capacity for unspeakable terror. Wire, in one of the very few moments of dialogue during the album, dedicates tonight to “the esoteric genius that was and is, Richey Edwards”, to tumultuous applause across the hall. “We love you; everyone in this room loves you”. The final track, ‘PCP’, could be any other slice of Manics bubblegum punk, but coming at the end of this album – after so much – it’s loss of innocence is what makes it so compelling. And with that, the band are – very swiftly – off the stage, as a shellshocked audience wade from the trenches for the ten minute interval.

By some distance, the band are more relaxed upon returning to the stage for the second set. James Dean Bradfield, having swapped sailor suit for a funeral suit, looks genuinely relieved. The second set kicks off with ‘Motorcycle Emptiness’, with infinitely greater bombast than the studio version ever had behind it, and Bradfield is back to cutting guitar hero poses with his wailing Les Paul like the last hour never happened. Later, Bradfield is even able to joke, telling the audience “my mother would be so proud, a room full of people in Manchester singing ‘Of Walking Abortions’”.

Though featuring two rarities – ‘Donkeys’ and ‘1985’ – the second set is heavy on the hits, and even the tracks from ‘Futurology’ aired are amongst the most upbeat on the album. Quite enough misery and horror in the first set, thank you very much. The ‘Futurology’ tracks sound stunning – Simple Minds’ ‘Empires and Dance’ (whose artwork and aesthetic was gently lifted for ‘the Holy Bible’) is a major influence on what could almost be described as a European concept album. Joy Division, Wire, Magazine and the Skids are all, as they were on ‘the Holy Bible’, casting their shadow over the arrangements, but it’s Low-era Bowie, Neu! and Kraftwerk to whom this album is most heavily indebted. Even Goldfrapp too. And, despite Nicky Wire’s protestations that the track is about no such thing, the gleaming ‘Walk Me To the Bridge’ carries weight tonight with its seemingly obvious Edwards references – the lyric “old songs leave long shadows” could have been a comment on tonight.

Tracks such as ‘You Stole the Sun From My Heart’ and ‘Your Love Alone (Is Not Enough’ do little to win over the sections of the audience that have probably not seen the Manics since the first outing of ‘the Holy Bible’, but this is a band – even, no, especially in the Richey days – who have never been ashamed to gain mainstream radio success and reach mass communication. Any besides, any grumblers are rewarded pretty sharply by ‘You Love Us’ – Nicky Wire, replete with captain’s hat and sunglasses, is in full peacock mode for this short burst of piss-and-vinegar punk fury.

Tonight, even the most committed cynic would concede that airing ‘the Holy Bible’ has little to do with nostalgia – why on Earth would that era be something any of the three Manics would want to re-immerse themselves in? Drenched in catharsis for band and audience alike, the Manic Street Preachers performing ‘the Holy Bible’ is a truly brilliant spectacle, and not only one of the real music events of 2014 but an important moment in the history of an important band.

The tour continues tonight at the Albert Hall (SOLD OUT) and three nights at the Camden Roundhouse next week (SOLD OUT). On Friday 12th December at 9AM, tickets go on sale for further “the Holy Bible” dates at:
May 30, 2015: Edinburgh, Usher Hall
June 1, 2015: Wolverhampton Civic Hall
June 2, 2015: Southampton, Guildhall
June 5, 2015: Cardiff, Cardiff Castle