Home Books UK Book Reviews The Hollies: On Track – Every Album, Every Track by Andrew Darlington... 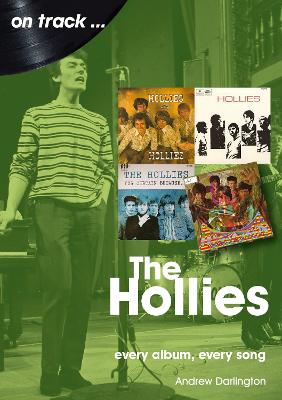 On Track … The Hollies; Every Album, Every Track by Andrew Darlington

It’s always good to see another title in the excellent On Track series. In case you haven’t come across them before, it’s very much a does what it says on the tin job: every track by an artist – single, b-side, album – listed, commented on and fitted into the overall perspective of the group’s career. In addition, there’s a generous section of well-chosen colour photos, essential and great fun for a group whose career has spanned fifty years and beyond.

The story of the Hollies would make a great film, encapsulating just about every aspect of the first wave British Beat Boom, starting with schoolmates Graham Nash and Allan Clarke fixating on the Everly Brothers’ close harmony singing style. Although largely forgotten now, the Everlys blend of folk, soul and rock’n’roll were a massive influence on 60’s artists as they headed for full-on rock music – the Brothers were an early Who obsession and their influence are all over people like Simon and Garfunkel or Hollies contemporaries like the Searchers or Billy J Kramer and the Dakotas. All this despite hating each other’s guts (allegedly) and ginormous amphetamine intake!

Starting with the group’s debut single and first hit, Stay, in 1963, the author shows how the Hollies were soon to leave the more trad-showbiz type groups like Freddie and the Dreamers, Gerry and the Pacemakers and Hermans Hermits standing in their wake. The track-by-track format of the book is ideal for showing how the group moved rapidly from a pretty formulaic first album of cover versions – typical of the time – to major hit singles like Just One Look, with its insanely catchy B-side, Keep Off That Friend of Mine and Here I Go Again.

It seemed like the moment one single started to go down in the charts, the next one would be on its way up. After that, they moved onwards and upwards with two high-class songs from future 10CC man Graham Gouldman, Bus Stop and Look Through Any Window. I’d put these up with any of the 60’s great singles by groups like the Kinks or the Who. You can hear the outline sketch of the first Crosby Stills and Nash album in the harmonies on Bus Stop. But as we know, the times they were a-changin’ – and an album of Dylan covers was to be the catalyst in some major changes. As Graham Nash has said, basically he was smoking loads of dope at the time and the others weren’t, and he certainly inhaled deep, taking in the game-changing sounds drifting over from the US West Coast, with groups like the Byrds, Love and the Buffalo Springfield. If an album of Dylan covers was intended to placate Nash’s desire to go beyond the simple pop of songs like Carrie Ann and Jennifer Eccles, it failed as he thought the approach trivialised the material. Songs like King Midas In Reverse were an uneasy compromise between his ideas and the more pop-oriented instincts of the rest of the group.

By now they were following the 60’s trend of writing practically all the material on albums like For Certain Because, Evolution and Butterfly. The photo section is very valuable here, the album and EP covers showing the group’s progress from a pop singles group to album-making heavyweight challengers, especially after the mega impact of Sgt Pepper in 1967. It’s fascinating seeing how the styles evolve, as the group leave behind the suits and matching outfits of the early records to full 60’s dayglo flowering (though not all the group look too sure about trying to look spaced out for the Evolution cover, with its fab psych lettering).

After that Graham Nash headed for the US, making music with David Crosby and Stephen Stills – two massive figures on the emerging alternative rock scene – and romance with Joni Mitchell. He’s stayed there to this day, through all the different incarnations of the group and its offshoots, as well as his own body of solo work. Nash was replaced by the more commercially oriented Terry Sylvester, and the group went on to have some of their biggest hits with songs like “He Ain’t Heavy, He’s My Brother”, Long Cool Woman In a Black Dress and The Air That I Breathe. Allan Clarke left and was replaced by Michael Rickfors for a while before returning. Other personnel changes were to follow, as was induction to the Rock’n’roll Hall of Fame, and continue to perform – ‘book tickets for Hollies 2022’ popped up as soon as I Googled the group’s name earlier today.

It’s evident that over the years what’s remembered gets narrowed and dumbed down by a process of cultural erosion so that the Sixties are summed up by Sgt Pepper, Beatles and Stones – which is a shame because it bypasses so much great material from a time when conditions came together to provide the launchpad for a decade of great music, The Hollies are a great example of what that simplified Greatest Hits approach leaves out. Andrew Darlington’s commentary on the group’s story and each individual track is always informative and witty and doesn’t fall into the fan trap of praising everything the group did regardless.

All in all, a very enjoyable book that should appeal to anyone with a real interest in the story of British music, and really nicely produced by publishers Sonic Bond. I’ll look forward to the next instalment of On Track.