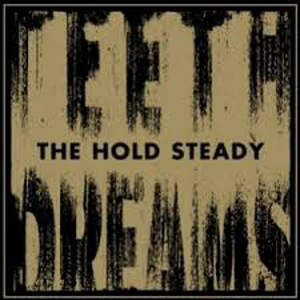 Does the new album from Brooklyn’s finest The Hold Steady mark a return to form? Sean Smith finds out.

He may not be hitting the same heights as he did during that golden run of early Hold Steady records, but Craig Finn sure does have it in him to produce the occasional line that makes you sit up and notice, and wonder about just how much pain and sorrow have permeated the life of a frontman famed for his love of drunken, street level debauchery.

Shorn of their keys, and with a crunchy new guitar sound that is a definite deviation from the norm, hearing the sozzled troubadour deliver a couplet like “Blood on the carpet, mud on the mattress, waking up with that American Sadness” tells you that you are still very much in The Hold Steady territory. The sadness in question could relate to a number of things in Finn’s hard partying existence, even if it is pinched from David Foster Wallace and his study on the greed of American society and the desire to acquire material goods.

Teeth Dreams itself refers to the appearance of your gnashers in subconscious dream-state, and can be interpreted as an innate fear of losing one’s edge, of losing control. It is all very apt. This is very much the sound of a band on autopilot, trotting out the same tales of losers, lovers, self-doubt, cigarettes and alcohol. Six records deep, this is still a fine collection of stories, yet it lacks the powerful resonance that made the band such an essential indie-rock staple for their oeuvre up until the disappointment of Heaven Is Whenever.

Spinners is the go to pop moment, a tale of yet another fragile female; she “dresses up and she spins around”, amidst a backdrop of small town heartbreak. It rocks, sure, but it just sounds like we have been there before. The Ambassador is a definite highlight – a tale that alludes to ominous hidings and nefarious characters with upside-down crosses carved in their arm.

“Pretty sure you’d recognize these guys
They were asking ’round for you just the other night
Blood on the bed and the lights in her eyes
If you came around the back we could take them by surprise”.

Closer The Oaks is overblown at just over nine minutes, and proves that we don’t listen to the Hold Steady for a lengthy guitar wigout. The standout moment is the track from which the excellent “American Sadness” quote is culled – On With The Business starts abruptly with an instant rally cry, and builds to a satisfying, classic Finn chorus. It is what we came for, and what leaves the lasting impression.

All words by Sean Smith. More writing by Sean on Louder Than War can be found at his author’s archive.;