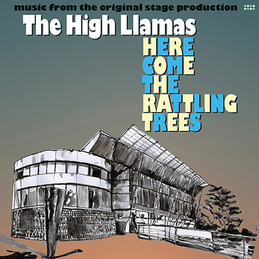 Sean O’Hagan and his crew return with a new set of songs and instrumentals. Louder Than War’s Craig Chaligne reviews.

Born from the ashes of Microdisney, one of the best 80’s band that never made it big, The High Llamas have been releasing albums every 3 to 4 years since 1992. Sean O’Hagan’s writing mixes influences from American sunshine pop (The Beach Boys particularly), Brazilian music and a definite film score feel. Since being dropped from V2 a few years ago the band have had to find other work to support themselves. O’hagan has been producing and arranging records for other bands and other members have been doing session work notably percussionist Rob Allum. When the band last played in London two years ago at The Islington, Sean had announced that their next project would be something different. Their latest release “Here Comes The Rattling Trees” is a very personal one as the album revolves around characters based in Peckham which is O’Hagan’s local neighbourhood. The songs and instrumentals were first written to be part of a full theatre production centred around the transfer of a leisure centre in Peckam from public to private ownership.

First performed at the Montpelier Theatre Pub  in Peckham in the fall of 2014, it then had a short run at The Tristan Bates Theatre in The West End. I had hopes for the monologues to be included in the set. Sean’s former Microdisney colleague Cathal Coughlan had done so on The North Sea Scroll’s project he did with Luke Haines but alas we will have to “make do” with the bands wonderful tunes. Before writing this review I was revisiting the band’s Hawaii album and the contrast between the two in terms of production is quite stricking. Hawaii’s sprawling arrangements were great but could sometimes over-shadow the songs, on “Here Come The Rattling Trees”, there is space to let the songs breathe. The keyboard arrangements are particularly great, the title track being a typical example mixing bubbling analogue synths, electric piano and what sounds like a harpsichord. Most of the pieces on the record are instrumental, displaying a big bossa nova influence. Not sure if they were used as links between the monologues but they definitely warrant a listen as musical pieces. The title track is the strongest one (the chorus will stick in your head for days) but vignettes like “McKain James” show that Sean O’Hagan’s songwriting skills still have a lot to offer. Hopefully there will be enough buyers of the new album to enable the band to put on another run of the stage production.