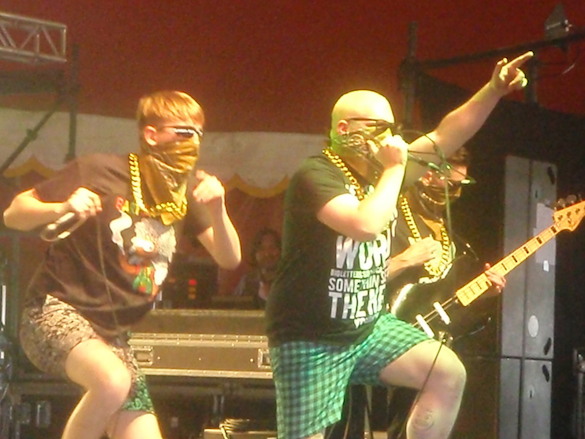 Reading and Leeds might well be a festival that’s viewed with suspicion these days, thanks in no small part to the punters it attracts, but the organisers haven’t left behind their alternative roots completely and the weekend still boasts plenty of acts for those more inclined to enjoy the heavier side of music. One such band are Watford’s THE HELL, who channel the doom-laden energies of the likes of Napalm Death. Louder Than War’s Keith Goldhanger reviews.

Im going to fuckin’ Readin’ wiv ma fuckin mates an’ we gonna drink gallons of fuckin’ beer, fall on strangers tents and 30 seconds after my mate goes into a portaloo we gonna kick, scream and thump the fuck out of it until he opens the door with his jeans around his ankles spitting beer at us that he’s taken inside with him. We’re gonna light fires. I’ve a bag full of hairspray with me that I’ll dump on the fire once conversations start to fade and I’m gonna climb into a shopping trolley, get pushed down a hill and I’m gonna discharge myself from hospital in time for the gates to open the following day…..

And I’m going the see THE HELL.

Many years ago before some of you were born and the rest of us were smaller, smoked fags and jumped over tube barriers in order to get from A to B, a bloke called Kevin (the same Kevin who is known nowadays as THE BUG used to put on gigs in that pub next to the police station in Brixton and he used to put on bands called things like Extreme Noise Terror, Napalm Death, Doom and The Electro Hippies who all wore ripped jeans and made noises that went DDDUUUUUUUUGGGHHHHHGGGG, WWWOOOAAAAAAARRRRRR !!!!!!!!BLAAAAAAAAAAARRRRRRGGGGGHHHHH!!DDDDDDDDDDDIIIIIIEEEEEEEEEEEEE ! MMMMMMMuuuuurderrrrrrrrrrrr !!! (but in a slightly lower key than this).

These bands had short sharp songs about stuff that none of us could decipher but we thought were very entertaining. Some people shook their fists in the air and slammed danced into each other violently and some of us stood at the back and chuckled. To this day it still can’t be decided whether we laughed at this music that John Peel was playing on Radio One late at night or whether we were laughing along with these people who were making it.

But we liked it.

In those days it was either this stuff, Bros or Bogshed.

Nowadays we’re spoilt for choice and have flavours of all different genres but there always has been and always will be room in our ears for bands like these and THE HELL are …well , a band like this.

THE HELL have half their faces covered with scarves so their mums can’t recognise them in metal magazines or their Job Seekers Allowance doesn’t get stopped (probably). Today, they’re wearing short trousers, have gold chains wrapped around their necks and they swear a lot.

They have names like “Nails”,”Jackhammer” and “Black Mist” and sing songs with the word “Shit” in them.
They get hate mail and they have T-shirts that rip off that Joy Division one that’ll piss a few more people off and they sound a bit like those bands we used to go and see before they were even born, down The aforementioned Canterbury Arms in South London.

This is probably a group of blokes that all play in lots of other hardcore bands simultaneously and one night in the pub decided to group together and form yet another one, call it simply THE HELL, for a laugh, wrote some tunes, for a laugh and are now going to have to tell all their other mates in those other bands to piss off because The Hell is what the kids want because the kids like….well, a bit of entertaining hardcore punk rock as well as a bit of a laugh. OK, they probably work their arses off getting this just right without being naff and have their principles in order (anti-Rascist, anti-homophobia …) whilst at the same time being angry young youths that simply wouldn’t know how to write songs about puppies, flowers and kissing. This lot seem to understand that this is sport at it’s finest. Crashing drums, short, sharp songs and loud guitars that thrash away at two hundred miles per hour that stop in the right places and start again in between bouts of vocals that could be coming from the mouths of any of the semi-masked males.

We get insults as well as plastic bottles thrown at us from the stage, inflatable hammers, a bottle of whisky as well as a couple of guitarists throughout this half hour onslaught.

Songs called “Bangers and Mosh” “Shit just got real” and the tune of the year (well…one of about fifty we have stored up at the moment) called “Everybody Dies”.

It’s like watching a bunch of wrestlers up on stage, a group of people you’d hate to really hate and a bunch of blokes you’re happy to shout along with and shout at. An angry group of people encouraging us to “Kick Shit out of the person next to us” , especially if they happen to be just, like….. “standing there singing along but not moving”.

The man found guilty without trial of bursting their five foot inflatable dinosaur is being swore at and security are told by the dozen or so people on stage to eject him from the site. It’s more like a not very loved up Slipknot than a pathetic Goldie Looking Chain and It’s unlikely there’s anyone here enjoying this who’ll be equally as excited about Jake Bugg later this afternoon.

In fact there’s probably a lot of metalheads who take life far too seriously that hate this. They look on from the back, stroke their chins and watch a tent full of energetic people running around each other and trying not to hurt each other (before dinner time !! – they hit the stage at 12.45 pm ) whilst wondering why people don’t take this as serious as …well, some of those bands we see alongside this lot over the weekend.

It’s angry, intense, a bit of a laugh, and they’re from Watford which according to Wikipedia is where all hardcore bands come from nowadays …probably the bastard children of those who stood giggling back at the Canterbury arms in 1988.

All words by Keith Goldhanger. You can read more from Keith by checking out his Author’s Archive.