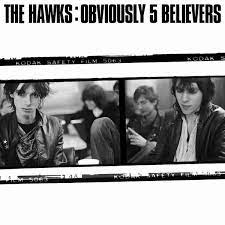 When early Birmingham punk band, TV Eye split up, two of the original members, Andy Wickett and Eamon Duffy, went on to play in Duran Duran and The Nightingales respectively. Wickett took the song Stevie’s Radio Station with him, which later morphed into a hit single for that band, renamed as Rio. Meanwhile, guitarists Dave Kusworth and Paul Adams, plus drummer Dave Twist came together in 1979 with singer Stephen Duffy and bassist Simon Colley, who both ironically were previously involved in an earlier line-up of Durannies. This new outfit lasted only two years, but in that time they amassed a following through their intriguing and original material.

Obviously 5 Believers was the band’s original name, which was soon changed to The Subterranean Hawks. It was in this guise that they first crossed my path, with a posthumous recording of Big Store included on the third What A Nice Way To Turn 17 compilation. Going back to when they were in existence, the band subsequently dropped Subterranean from their moniker on the advice of producer Bob Lamb and henceforth just became known as The Hawks.

In 1980, they released their sole vinyl artefact in the band’s lifetime, the Words Of Hope single. Sense Of Ending, which was the record’s flipside, is included here. On what is provided on Obviously 5 Believers, to my ears The Hawks seem to have occupied the middle ground between the stylish and original punk bands Buzzcocks, The Prefects (who Dave Twist played in) and The Subway Sect, as well as what was to come in independent pop music later in the 1980s.

In some ways, this collection acts as something of a follow-up of The Lost Studio Recordings 1977-1978 TV Eye collection from 2017, also on Seventeen Records. Obviously 5 Believers gets underway with All the Sad Young Men, a lo-fi guitar skitter coupled with an eerie, almost psychedelic strangeness. Duffy’s wordy singing suggests romantic failings and shady double dealings with each carefully deployed word. Then Aztec Moon hints at folk rock, initially, before settling into something more intense. This song of personal torment echoes the sound of The Smiths, but of course, The Hawks were doing it well before that band had even been formed. Dave Kusworth gets a chance to squeeze some fine licks out of his guitar here too and the penitent lyric also mentions the “big store,” which leads us to…

As stated above, the first Hawks recording that I ever heard was Big Store. I remember it making an impression on me back in the 1980s, coming over as catchy and as thrillingly different as Buzzcocks in their initial incarnation. The Hawks exercise a touch more restraint perhaps, but this is still a pleasingly spiky and absorbing effort. The following What Can I Give You? successfully digs into that same area too, superior punk-pop with a real edge. There is a palpable air of mystery that hangs over a lot of the work featured on Obviously 5 Believers and this gave The Hawks a whole different dimension than a lot of post-punk chancers.

A Sense Of Ending starts with an odd bouncing bass sound, before urgent drums and buried Wilko Johnson riffing comes in to augment a sliding guitar sound. Duffy’s voice sits somewhere in the middle, breathlessly positing his romantic notions that you have to really stretch to hear, whilst all around, raucous Stooges and R&B guitar sounds abound.

Despite The Hawks being Brum through and through, Bullfighter chimes in with the Postcard sound that was gathering pace and music press column inches at the time. It’s brilliant, good-natured pop music with a kick, with Duffy wailing at one point, “I hope I never die in the ring,” and also, “I never felt so horny”! Then things are taken down a notch with the acoustic introduction and bewitching organ sound of Jazz Club. On the surface, this appears to be an anti-war effort, as the song states, “Who wants against the roses, they leave behind such sad lives,” but it just as well could be a satire on student radicals. Serenade shares a lot in common with early Subway Sect, clashing and trebly chords gamely doing battle with Duffy’s fey vocal and a hammering piano.

In a bit of a pointer to Dave Kusworth’s later Stones-style roots rock adventures, Something Soon comes complete with a wailing harp and an irrepressible spring in its step. Final track, What Is Is! ensues with an energy-charged guitar line and chant, before dropping down into a simple but effective strum that has 1960s beat pop and rhythm and blues at its heart.

When the band split, Duffy went on to have pop success as a solo artist in the 1980s and also produced a fine body of work with his band, The Lilac Time. Dave Kusworth moved on to work extensively with Nikki Sudden of The Swell Maps and cut some classic rock ‘n’ roll with his own band. Dave Twist is currently member of the fab Black Bombers (their mini-LP Vol 4 is reviewed here).

Stephen Duffy promised Dave Kusworth that he would delve into his tape archive of The Hawks to finally put out an album of the band’s recordings in the last conversation he had with him, before Dave sadly passed away in 2020. Obviously 5 Believers is the result and depicts a band stacked with vim, talent and a potential that would sadly never be realised. Marooned in unfashionable Birmingham while the music press fetishised London, Manchester and Glasgow in turn, The Hawks were creating something special that went practically unnoticed. That doesn’t take anything away from what is a superb collection, though. It bests most post-punk of its time easily, revealing a band of rare style and inspiration that were just so unlucky in not attracting more attention.