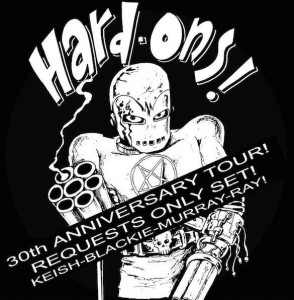 30 years on, this is no nostalgia-fest by Aussie punk juggernauts The Hard Ons. Louder Than War’s Marc Brekau risks life and limb for the umpeenth time…

Play that music short, hard and fast Westies, and make it last 30 years and a million cheers. Well, after the ‘million beers’ tagline was taken by another domestic export, The Cosmic Psychos, cheers seemed an appropriate term to introduce Punchbowl’s finest musical export, The Hard Ons, as they transit van across the country on their 30th anniversary It’s Not How It Used To Be tour.

With an independent legacy spanning three decades, some 260,000 record/CD sales, 17 consecutive #1 domestic indie chart positions and a relentless touring schedule that’s covered – at the last unconfirmed count – around 2,400 gigs across Australia, Japan and Europe (for 16 tours), among other appreciative destinations, The Hard Ons have every reason to celebrate their achievements. Enduring just two line-up changes along the way, individual band members remain great friends both on and off stage, a rare feat in an industry renowned for bitter break-ups, member divorces, legal feuds and high profile media spats. In fact, I’ve never found the band to display any ‘airs or graces’ when it comes to their brand, band and diehard fans, whom they continue to associate with in their personal, humble and friendly way.

Despite the passing of time and onset of age, Messrs Keish, Blackie, Ray and Murray manage their careers as punk intended, creating hand drawn artwork for CDs, posters and merchandise (mainly the work of Ray); managing their own affairs, tour requirements and merch stand at gigs; releasing a steady stream of new and old material on various indie labels; and constantly touring to keep the band and brand alive, all while holding ticket prices down. Sure, if they could charge $100 a ticket it would be revenue well earned, but as befits the band’s DIY and independent ethos, they continue to maintain a low ticket price strategy. For example, tonight’s gig is priced at $17 (plus booking fee), roughly the cost of a leading junk food brand pizza meal deal!

Recruiting former lead singer Keish for the ride – he last played on the 21st anniversary tour – the It’s Not How It Used To Be’ tour offers punters an opportunity to create an ‘all request’ set list, under the strict criteria only Keish-era material be chosen. For older fans – and sadly age dictates I now rank among them – it’s a sublime concept as diehards rekindle their historical and nostalgic live song associations for one more drunken night. Especially as the older material benefits from the pop-punk vocal chords that Keish delivers, over the harder tones offered by Blackie, the current front man. Same songs, different delivery, but for many diehards only Keish’s dulcet tones will do as these gems enjoy a brief renaissance, dusted off for one night in place of the newer material that suits Blackie’s vocal style.

Support comes from local bands Wicked City and Klowns, the latter warming the almost sell out crowd a treat. With punters in full party mode the beer flows, the bodies mosh and their energy levels rise to 11 well before the band take stage. We hear them sound check from behind a red curtain before they emerge with shirts and smiles to power through the two opening numbers, There Was A Time and All Set To Go.

Shirts are promptly removed – bar Keish who remains clothed – as the pit goes wild, bodies bounce and collide, beer is spilt and sweat glands ooze odour as they launch into Raining and Made To Love Uou.

Something About You sends the mosh pit into fever pitch again as the body odour intensifies. I’m then joined by a lady who hands over a beer in return for squeezing into my space. I think she’s wearing a sweater, brilliant stuff, or is that just the beer talking? Kill You Mum and Get Wet continue the musical assault as Keish jumps into the crowd for a surf; Blackie breaks three strings during the set; Ray plays at the manic head shaking pace we’re accustomed to while Murray keeps beat without either fanfare or fuss, a true quiet achiever. As a front man, Keish clearly enjoys what he’s doing, and given his post band career and family man status, this tour’s a trip down memory lane for him. It’s certainly that for us diehard types as well, especially when the band pull out She’s A Dish and Dull in quick succession before finishing with On and On.

A short break amid loud cheers brings the band back for a random selection to take the set beyond the advertised 12:20am finish time. But we care not, for its brilliant stuff, and both Suck And Swallow – a name that once inspired a Hard Ons tribute band in England – and Girl In The Sweater almost finish the crowd as vocal chords are tested, beers are balanced and spilt, bodies violently collide and body odours surpass the pungently strong and obnoxious level. Just when there’s nothing left for the body to give, it’s forced into a second encore, but sadly there’s no Surf On My Face played tonight. Well, not that I recall.

Exhausted, I depart the Corner Hotel at 12:50am, miss the last train home and eventually stagger through the front door at 3am to watch the World Cup games on telly. I attempt to placate England’s defeat to the Azzurri as my daughter asks where the smell of beer and smelly body odour is coming from. Sadly I fail to reply as Mr Sandman visits just as the final whistle blows…damn those Italians…what smells darling…ZZZzzzz…

Having met the band several times across their 30 year history, I write impressed, satisfied, delighted, nostalgic and damned proud of their achievements. The Hard Ons remain as funny, fan friendly, energetic and committed to their careers as when I first met them as teenagers, then embarking on their debut Melbourne tour. Back then the newspapers considered their name too offensive, and would promote them in the gig guide as the Hard-? Thankfully times have changed, and as I reflect on a truly superb gig I close my eyes to visualise the set list for the 35th anniversary tour. Oh, and to dream about that girl in the sweater…

Live footage taken from Mr1AV’s excellent Youtube selection, and permission is pending to include them in this review. Thank you Mr1AV when it arrives!

All words by Marc Brekau, find his Louder Than War archive here.