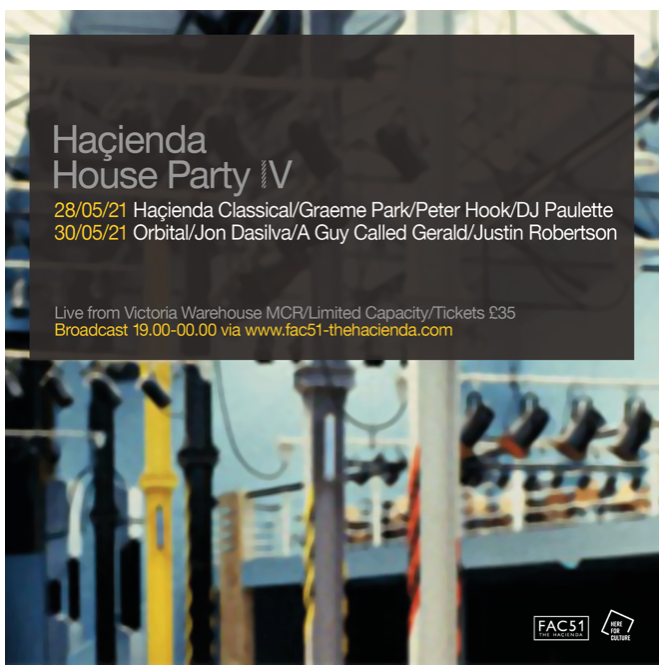 With A Very Limited Socially Distanced Audience In Attendance,

Both Nights To Be Streamed Live Free To Air For Charity

FAC 51 The Haçienda is to hold another of its acclaimed Haçienda House Parties this coming May Bank Holiday and this time round, it’s a little bit different.

On Friday 28th and Sunday 30th May, FAC51 sees its first audience facing events in well over a year as Haçienda Classical with Graeme Park & Manchester Camerata plays its first concert in 18 months and UK techno legends Orbital headline at Victoria Warehouse, Manchester.

The House Party events proved to be one of highlights of the last year lifting people’s spirits as well as amassing huge audiences globally and through the donations of viewers raising hundreds of thousands of pounds for charity.

As we return to live events, the recent Arts Council England funding received from the Cultural Recovery Fund has enabled us to produce this one-off live / broadcast House Party event for May Bank Holiday weekend which sees us re-engage our artists and crew for a celebration after the events of the past year.

In addition to Haçienda Classical and Orbital, DJ’s playing across both nights include Graeme Park, Jon Dasilva, DJ Paulette, Justin Robertson & Peter Hook with A Guy Called Gerald live alongside Orbital on the second night.

With a limited socially distanced audience of only a few hundred able to attend each night, The Haçienda House Party IV provides a one off opportunity for attendees to catch Haçienda Classical and Orbital in a very distinct, close up, intimate environment.

Both events are to be broadcast free to air at www.fac51-thehacienda.com and YouTube and as with our previous events, charity donations are encouraged which will benefit The Christie charity & Save the Children directly.

Donate at the link here – bit.ly/HacHsePartyIVDONATE

These Victoria Warehouse parties are the first time a Haçienda House Party has come from a live event and with restrictions easing allowing us all to come together once again, this the first of a series of planned events and Haçienda Classical concerts for FAC51 to the end of the year.

With all new stage, lighting and visuals plans being prepared for the broadcast which is produced by Manchester’s Surdevan Creative, The Haçienda House Party IV is set to be a very special pair of nights as The Haçienda’s first live concerts and events of this year’s return.

About The Haçienda House Party IV

“To celebrate the lifting of restrictions, we are holding our fourth Hacienda House Party charity streaming event. The others were ecstacally received, raising spirits and a great deal of money for charities. With us coming live from Victoria Warehouse this time with Hacienda Classical and Orbital and the support of DCMS and Art Council England, I’m sure this will be the best one yet. Tony and Rob would very proud.” Peter Hook

“I can’t wait to perform again with the magnificent Manchester Camerata and everyone else involved with Haçienda Classical at Victoria Warehouse. It’s been too long! I’m particularly looking forward to making actual eye contact from the stage and DJ booth as we all come together to entertain a real, live audience.” Graeme Park

enhanced services over and above what the NHS funds. This includes money for cancer care and treatment, research, education and extra patient services. Gifts from the public make a huge difference to the care and treatment that The Christie is able to provide to cancer patients and their families.

Find out how to donate at www.christies.org/the-christie-charity/donate

Save the Children fights every single day for children’s futures. We stand side by side with children in the toughest places to be a child. In places where others won’t go, we’re there, giving everything to make sure they survive, get protected, and have the chance to learn. Every child should get to make their mark on the world and build a better future for us all.