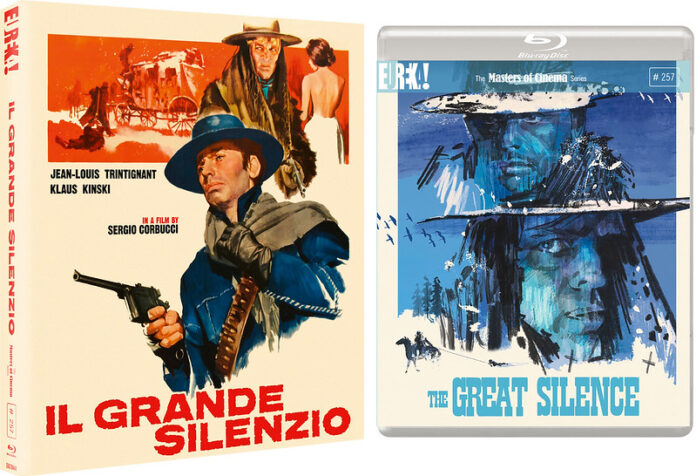 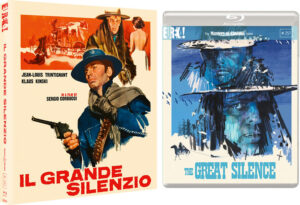 Jamie Havlin looks at one of the best and most influential Italian Westerns ever made.

The Great Silence, or to give it its Italian title, Il Grande Silenzio, is far from your average western.

Set in the frontier town of Snow Hill in Utah in the very late nineteenth century, the harsh climate reflects the equally harsh lives of most of the town’s inhabitants, as well as the pessimistic tone of the movie. It’s difficult to see why anybody would want to live there. The cold and blizzards are bad enough, but bounty hunters and a corrupt banker and Justice of the Peace appear to be running the town for their own benefit. Luckily for the locals, a new sheriff and a mute gunslinger are about to arrive and between them, they might just shake things up. 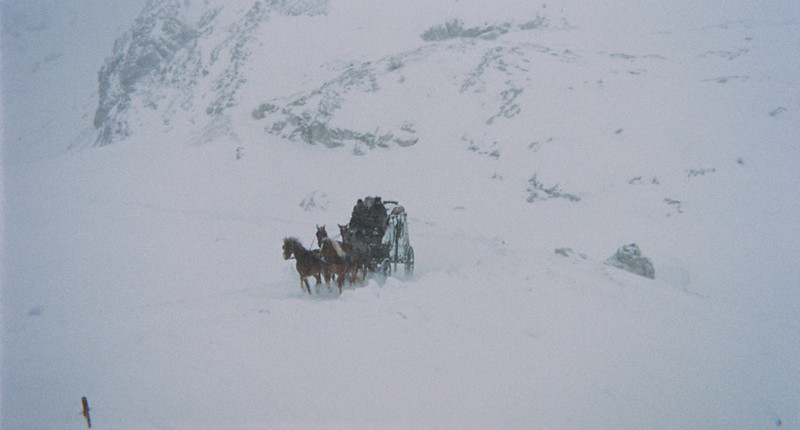 The new sheriff is Gideon Burnett (Frank Wolff). He’s a principled man but naïve. Confronting some bandits on his way into town, he finds that the freezing cold has caused his rifle’s mechanism to jam. They demand his horse. He asks why. They tell him they’re going to eat it as they’re desperately hungry.

Nicknamed Silence, the mute gunslinger is played by Jean-Louis Trintignant (The Conformist, Z). He kills for money but unlike the bounty hunters – a profession he despises – he only kills men that he believes deserve to die.

Fitting absolutely into this category is Loco (Klaus Kinski), the leader of the local bounty hunter gang. A despicable man in every way, Loco meets Silence and Burnett on a Snow Hill bound stagecoach, a journey that will inevitably remind you of Tarantino’s The Hateful Eight. 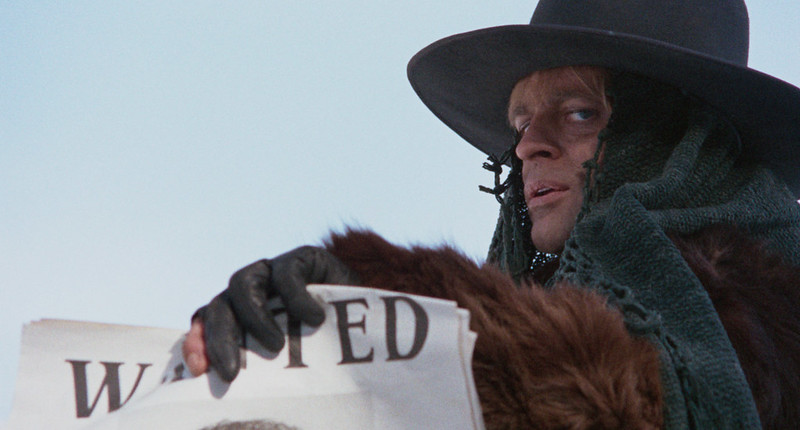 We’ve already seen Loco embark on a murder spree. ‘Try to understand, ma’am, it’s our bread and butter,’ he explains to the mother of a young outlaw called Miguel who his trigger-happy pal has just gunned down in front of her. After gleefully torturing and killing a man for information on his whereabouts, he tracks down and shoots James Middleton, a bandit wanted dead or alive who has left his group’s hideaway to pay a secret visit to his wife.

‘Now, go to your ex-husband and pack him in the snow,’ he orders Pauline (Vonetta McGee), as he can’t transfer the body immediately to the sheriff’s office to claim his reward. There isn’t merest hint of remorse in his words and as he speaks his piercing blue eyes are far more chilling than Snow Hill’s sub-zero temperatures.

Miguel’s mother and Pauline both beg Silence to avenge their losses. This could be difficult. When it comes to killing, Loco and Silence share the same modus operandi: neither will draw their guns in public before their enemies do, so that when they kill, they do so legally in self-defence. A terse and extremely violent struggle awaits. 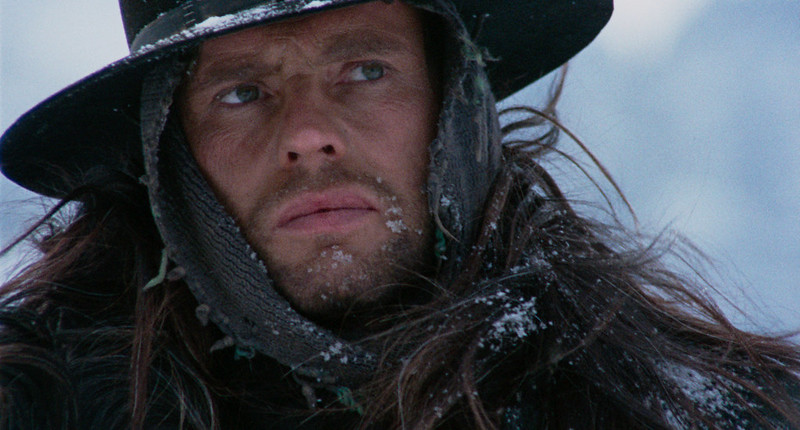 Director Sergio Corbucci is said to have wanted to film a snowbound western for some time, partly connected to the fact that he fancied fitting in some skiing in the Italian Dolomites during any spare time at weekends. He finally got his wish with The Great Silence.

I have no idea if he ever found time to make his way onto any nearby ski slopes, but I do know he made a masterful and devastating Spaghetti Western that is equally moving and unpredictable.

Although he never utters a word Jean-Louis Trintignant conveys much through his eyes, facial expressions and body language. Klaus Kinski, though, steals the show with his portrayal of Loco. Oozing obnoxiousness every time he appears onscreen, Loco must be one of the most memorable villains in spaghetti western history. Frank Wolff and Vonetta McGee deserve plaudits too, as does the director of photography, Silvano Ippoliti. Ennio Morricone supplies a superb score (which is superior to the work he contributed to The Hateful Eight), the main theme being a real highlight of the Maestro’s long and illustrious career.

In addition to influencing Tarantino, it’s also easy to see the impact that The Great Silence also exerted on films like McCabe & Mrs. Miller and Heaven’s Gate. It’s bleak but a real triumph.

This Limited-Edition Set (3000 copies) will feature an O-Card Slipcase; a reversible poster featuring the film’s original artwork; three audio commentaries by western aficionados; Cox on Corbucci – Alex Cox talks about Sergio Corbucci; Western, Italian Style – a 1968 documentary; a collector’s booklet and set of lobby cards. There are also two alternate endings but don’t dare watch these before seeing the film!

This is the first time the film has been presented on Blu-ray in the UK from a 2K restoration. For more on the release click here.