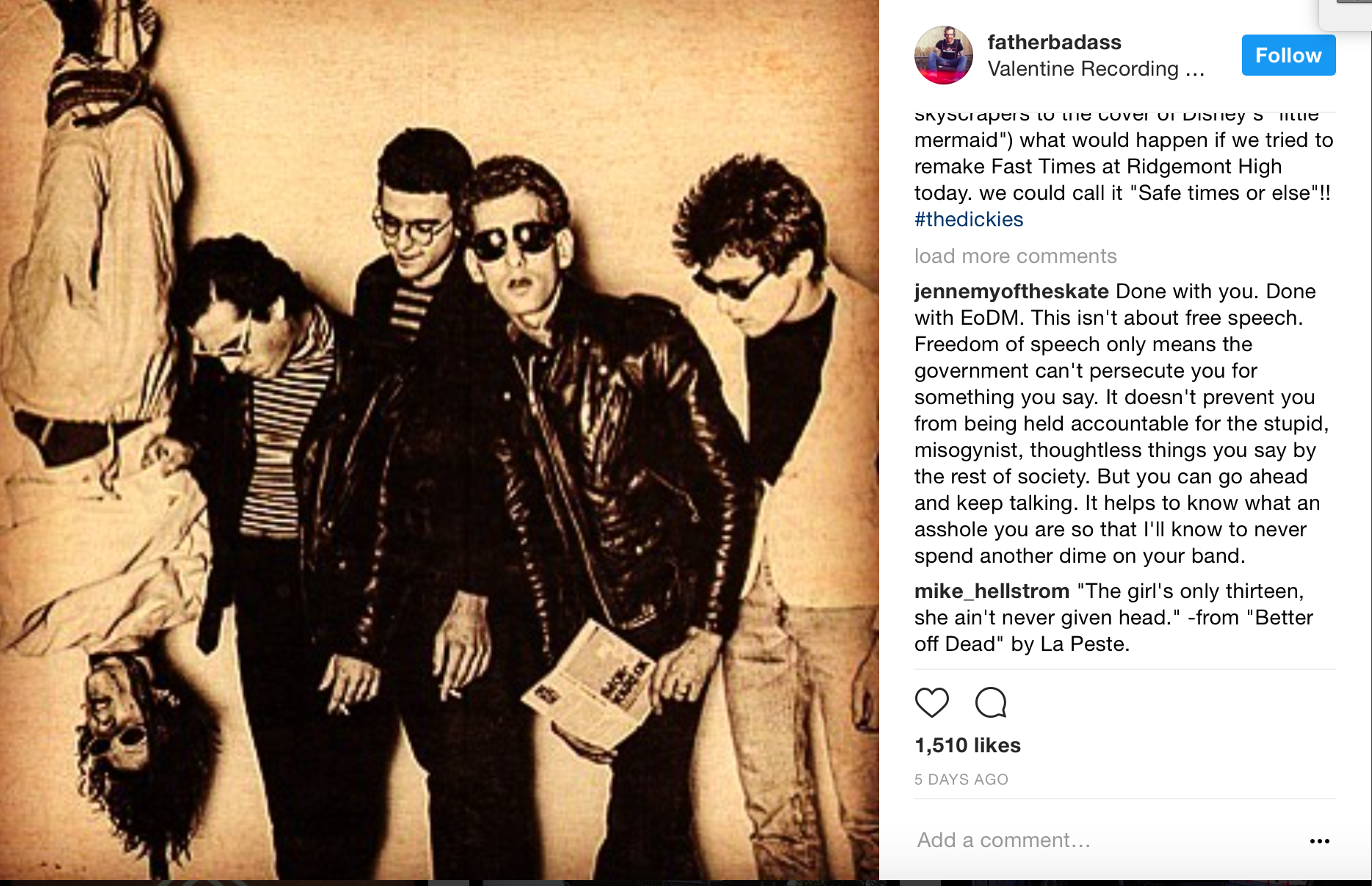 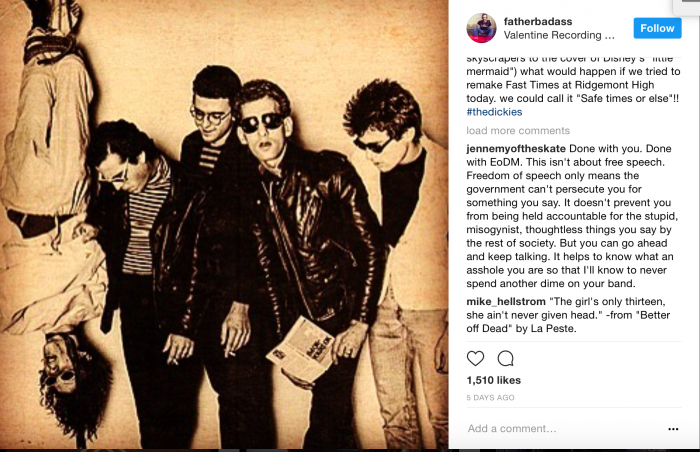 The great Dickies debate continues to rumble after the band’s onstage rant after a placard as waved at them at a date on the recent Warped tour (full report of that incident here) .

The internet has become a forum for all sides with some defending the right to free speech no matter what is said to others questioning the band’s attitude to women whilst some say that it was comedy and in the no holds barred attitude of punk and others questioning just what punk itself is and whether punk should allow anything to be said no matter how offensive or should have some morality or whether the Dickies are or not a ‘classic punk band’ .

It’s an argument that has been going on since the beginning of punk rock itself but has now been heightened with addition of a few different generations of punk fans. And now other musicians are reacting to the story with Jesse Hughes and Noodles from the Offspring adding their thoughts to the debate.

On his Instagram account Jesse Hughes of The Eagles Of Death Metal has made his own statement.

‘The Dickies forever !!!!the Dickies for all time!!!! long live freedom of speech and long live the notion that rock ‘n’ roll is about saying whatever the fuck you want!!!!!! Especially if it’s offensive to people Who are weak cowardly and can’t stand for anyone else to be free !!!!sticks and stones, my friends,sticks and stones!!!….., and PS a safe zone is a place that exists in your home not at the place you voluntarily drive to and walk into and sit in an audience of that exists in a public place….. maybe the people that don’t like the Dickies can start a Gofundme for a good old fashioned “offensive” book bonfire!!!! Or maybe the enemies of free speech can start a Gofuckyourselffund campaign !!!I think we could raise money for that!!!! The enemies of free speech must be stopped at all costs!!!! Does anyone remember Lenny Bruce….. if Jim Morrison’s obscenity arrest in Florida had taken place today I wonder how many members of the crowd would’ve cheered for the police…. and I don’t know if anyone knows this about rock ‘n’ roll but it’s been sexualized from the get go i.e. the words rock and roll…. or maybe the fact that every fucking rock ‘n’ roll song is either about butt fucking or having sex with a 16 or 17-year-old. allow me to quote the Beatles “she was just 17″….. or l”Ringo Starr “she 16 she’s beautiful and she’s mine”,…. or how about Willie Dixon “I’m your back door man The men don’t know but the little girls they understand”. Or Bill Haley and the comets “I’m like a one eyed cat peeping in the seafood store”..,or Beyoncé’s “naughty girl”….. and for anyone who is curious as to whether or not Rock’n’Roll has got something to do with penises in general just listen to grace Jones’s “pull up to the bumper” or open up the cover to the Steppenwolf album entitled ” for ladies only” or listen to basically any of the fucking lyrics to any PJ Harvey song….(but if you talk to your psychiatrist he’ll tell you that everything has to do with penises from skyscrapers to the cover of Disney’s “little mermaid”) what would happen if we tried to remake Fast Times at Ridgemont High today. we could call it “Safe times or else”!! #thedickies‘

Noodles also made his own statement.

“Who would’ve thought that, in 2017, The Dickies would become “The Most Dangerous Band In America?” I’d like to congratulate The Dickies on finally achieving this great honor and distinction. Though they’ve long been one of my favorite bands I never thought of them as dangerous. Sure they play loud and fast but they’re also so goddamn melodic and fun. I honestly don’t see how anyone could seriously take offense from anything they do or say. Perhaps that just makes this achievement all the more important, so congratulations to The Dickies, and thank you for your years of service to the punk rock cause. I’d also like to thank the passive-aggressive idiot, or idiots, who precipitated this event by protesting a joke, from the side of the slam pit, at a punk rock show. It takes some real guts (or is it idiocy?) to demand a “safe space” where nobody really wants or expects one to be, even though it really is a pretty goddamn safe place to begin with. I am also looking forward to seeing The Dickies tomorrow night with @vandalsofficial , @wellhungheart and @guttermouthofficial because fuck you, kiss my ass, blow me, blow me, blow me, you fat fucking cunts and assholes. Sincerely, Noodles”