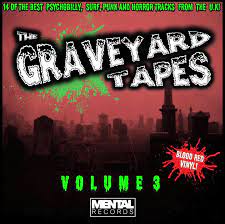 My quiff was all-of-a quiver when I received the latest instalment of the series of The Graveyard Tapes. Volume 3 of the “best psychobilly, surf, punk and horror tracks from the UK” delivers exactly what it states on the cover. More songs than on either of the previous releases, 14 in total, with 9 of them from Scottish based acts. ‘Mon the psycho/rockabilly surf punks.

Being the Graveyard Tapes there has to be the right blend of classic b-movie/horror icons – sure enough a quick glance at the track list will tell you all you need to know Werewolves/Wolfmen/Wolferines, Witches, Vampyres, Monsters and Surf Creatures all represented straight off and to top it all off, it’s on befitting blood red vinyl.

Nottingham’s Howlin’ Bones and Numbskulls kick off proceedings with a couple of bass slapping psychobilly bangers.  Howlin’ Bones introducing us to Mr Werewolf, while Aberdeen’s Numbskulls sing about perhaps the evillest of the bloodsucking creatures to feature on the album, the bastarding Scottish Midgees. Moving on from the bass slapping psychobilly, The Bikini Bottoms contribute the garage punk of their last single released as a 2-piece, the frenetic Bite Me. Their last hurrah before Jack and Evan parted ways, Jack re-located to London and the band was re-formed as a three piece. Look out world.

A couple of surf numbers follow courtesy of Surf Creature from Birmingham’s Kings of Hong Kong and all the way from Kirriemuir in Angus, the legendary and enigmatic Secret Admirer invite us to the Monster House. Fancy a bit of ska-billy? Of course you do! Then The Three n’ Eights from Ayrshire will happily oblige and get you skanking along with the scarlet haired chanteuse Ingrid belting out live favourite Leopard Print Heart*. Signing (or singing) off for side one, it’s London based Surfin’ Wombatz channelling the spirit of Lux, Ivy and co. with their excellent sleazy punk n roll on Black Cat Bone.

Phew, I’m knackered and we’re only halfway through!

Onto Side 2 then and anyone that knows me will know I’m a bit evangelical about the band who kick things off. In the last year or so, The Best Band Influence have become busking legends on the streets of Glasgow attracting massive crowds and impromptu jiving when they play on a Friday & Saturday afternoon on Buchanan Street/St Enoch Square. Before they conquer the world, they have contributed the cracking rockabilly howl of Wolfman from their debut album Rock-It!

Ugly Fly Guys from Durham bring some eeriness and crunchingly distorted horror punk to proceedings with their spine-chilling ditty Brainiac before Edinburgh’s The Phlegm bring back up some stand-up bass and get set to induce a frenzied wrecking with the hot stepping psychobilly of My Baby is Vampyre. Methil legends 13 Tombs keep up the horror punk vibe with their high adrenaline rush of I was a Teenage Wolferine, verging on the Dead Kennedy’s in places.

Next up from the deep and dark east of Edinburgh is Thee Girl Fridays whose addictive Love Witch blends their punky surf vibes with a feel of 60’s doo-wop/Motown in places. The bass is back (can you tell I love a bit of stand-up bass) as Grave Failures take us on a bone-shaking horror tour around Aberdeen in their quiff-raising psychobilly stomper Bonemobile before X Ray Cat Trio from Leeds provide us with a suitably atmospheric instrumental in Gundred’s Revenge to round of proceedings nicely.

Then all you need to do is flip back over to side one and start again.

I long for the days when we can get back to live music and have another Graveyard Bash in the iconic McChuills bar in Glasgow’s High Street. In the meantime, this is the perfect companion to a nice cold beer in the garden (for as long as the unseeming and unsettling Glasgow heatwave hangs around…)

*RIP Johanna Collins (Trumpet Player for the Three n’ Eights who sadly passed away this year.