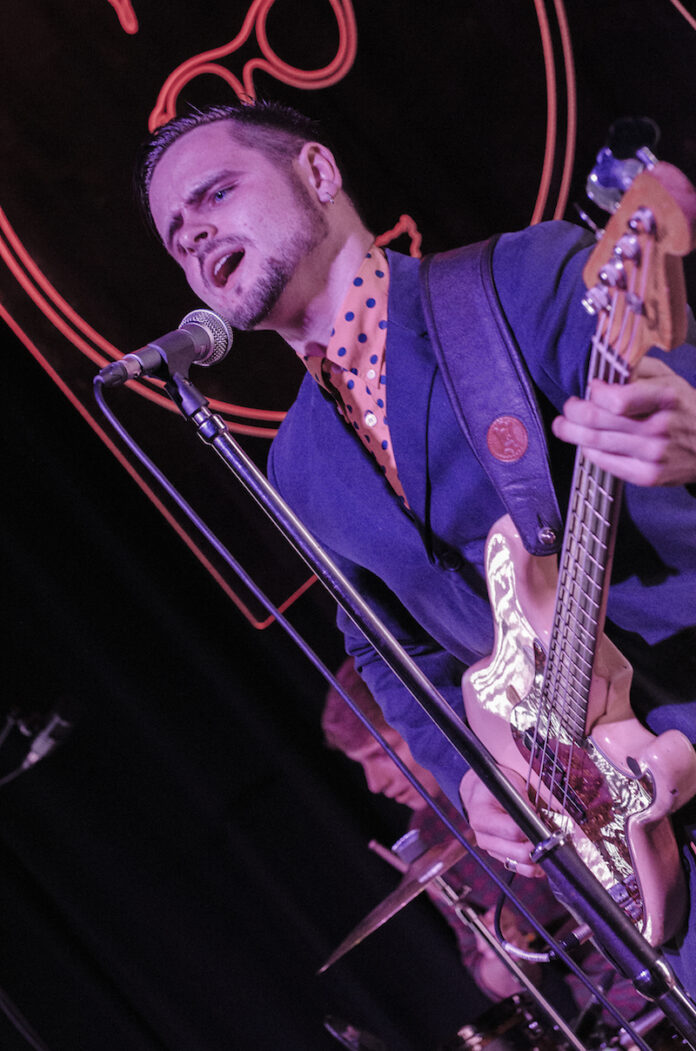 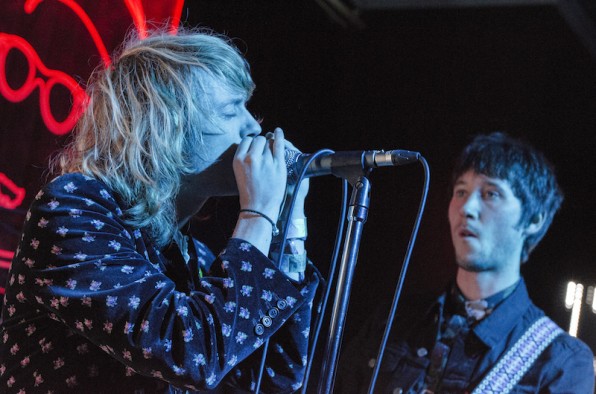 XFM’s ‘First Friday’ monthly live showcase for their ‘ones to watch’  for October was left to  local up and coming quartet The Gramotones to take the sole spotlight.  Not that anyone was  out to complain  with the chance of a full set for The Gramotones  in a sold out,  packed solid  Band On The Wall.

Six months ago The Gramotones were LTW’s new band of the day. The promise which has been in evidence for the last eighteen moths saw them the acclaim of and a win a high profile support slot with Paul Weller – only missing out on a US trip with The Modfather due to frustrating working visa ‘issues’. The stint with Weller however, seems to have injected the band with a new confidence and dare we say, slight swagger sees them sitting at the fore of an exciting new wave of young bands. Combine that  with a partisan crowd of hometown fans, friends and family meant a triumphant home win was a given. 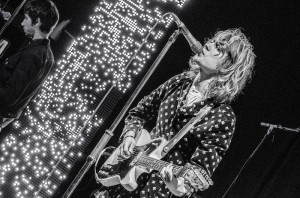 The range of musical influences, encapsulated in their three track  ‘Gramotones’ EP (noted by Louder Than War as  “a short, sharp, shock to the system”) means their sound is one which can’t easily be labelled. Of course there are all sorts of comparisons both in sound and look which allows the band to be favourable tagged alongside some of the greats of British music both contemporary and historical, but The Gramotones are nothing but their own band.  ‘Classic Englishness’ might be a new genre which they’ve invented. In duel frontmen Sid Cooper and Jake Fletcher who switch between lead vocals, guitars and keys, they boast a strong aura and presence yet in very different respects. Cooper, the epitome of a young Lennon or Townshend, shirt buttoned up to the neck and offering up a vocal which works just as effectively either in the lead or alongside Fletchers. And now there’s a young man who looks the part – maybe taking a tip of two on what constitutes a stylish cool from Mr Weller, but resplendent in button up velvet looking frock coat, not that this was a fashion show at all, but certainly on the path to becoming a real star. 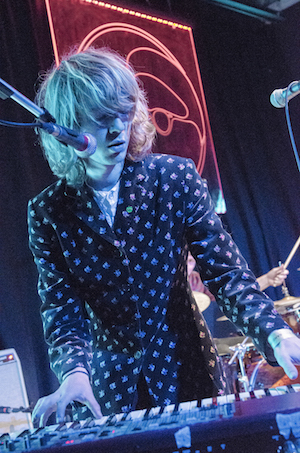 longside and behind the front two you’ll find bassist Ryan Comac –  all decked out in smart three quartet jacket and trimmed beard and putting Radcliffe back on the map – and of course, a no nonsense drummer in James, who add their stamp to an archetypal four piece sound.

Kicking off with a familiar opening blast of instantly recognisable to the hordes songs, the set found the space to give an airing to some new material. Having announced themselves they too the chance to throw  a couple of new songs in the set quite early on – ‘Heaven Knows Me Now and ‘Child Benefit Train’ already showing that even with the song titles, there’s a developing maturity about their writing, and in the sound, the feel of something verging on country rock is starting to creep into the repertoire as well as showcasing their own distinctive and impressive vocal harmonies. With  Jake heading off to the keys for ‘No Matter How Hard I Try’, it was almost musical anarchy, with  Sid taking over  bass duties and Ryan picking up a nice looking gold top while ‘Clinging Onto All Things Lost’ added a more bluesy element to the night.

There’s the added element of  a well-established song like ‘Daltry Street’ clearly becoming a bit of a crowd pleasing, flag waving singalong signature tune and  the encore selection couldn’t be faulted – featuring the brooding yet jingly brilliant ‘Money Girls & Life’(“people say I’m boring” – never!)  with its Springsteenesque  mid song  crescendos and of course the breakneck blast of ‘Old Man’, yet for many it will have been the impressive new material which was the talking point. A healthy and dedicated following, a well paced and sequenced series of songs and an attitude which has generates that  palpable feel about them which alludes to why they are indeed ‘ones to watch’  – all combining to fan the flames which are building up around The Gramotones.  Apparently  “the best thing to come out of Oldham since the tubigrip bandage”